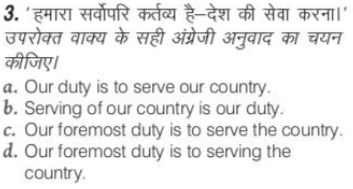 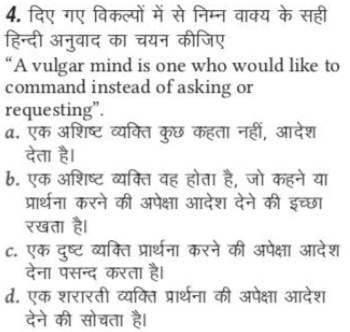 42. Read the following information carefully and then answer the given question.

44. Select the option that is relate to the fourth figure in the same way as the first figure is related to the second figure. 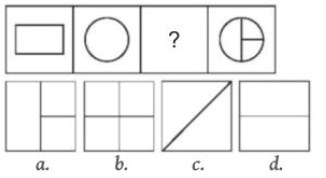 45. Choose the option that belongs to the same category as the below words.

47. Which of the following diagrams correctly represents Brinjal, Food, Vegetable?

51. In a certain code, PEOPLE is written as ELPOEP. How will COUNTRY be written in that code?

52. Arrange the following words in a meaningful sequence.

53. Read the given statement and conclusions carefully and select which of the conclusions logically follow(s) from the statement.

Statement No country is absolutely self-dependent these days.

(I) Countrymen in general have become lazy.

(II) It is impossible to grow and produce all that a country needs.

(a)   Only conclusion I follows

(b)   Only conclusion II follows

56. You are given a question and two statements. Identify which of the statements is/are necessary/sufficient to answer the question.

Question Who among A, B, C, D and E is the lightest?

(I) C is heavier than B and E but lighter than D.

(II) D is not the heaviest.

(a)   Statement I alone is sufficient to answer the question.

(b)   Statement II alone is sufficient to answer the question.

(c)   Either statement I alone or statement II alone is sufficient to answer the question.

(d)   Both statement I and II together are not sufficient to answer the question.

57. Amutha’s college bus is facing North when it reaches her college. After starting from Amutha’s house, it turned right twice and then left before reaching the college. What direction was the bus facing when it left the bus stop in front of Amutha’s house?

58. Kumar said, “This girl is the wife of the grandson of my mother”. How is the girl related to Kumar?

59. Read the given statements and conclusions carefully and select which of the conclusions logically follow(s) from the statements.

Statements All women are flowers.

All flowers are parrots.

(I) All women are parrots.

(II) All parrots are women.

(a)   Only conclusion I follows

(b)   Only conclusion II follows

60. A question is followed by two arguments. Decide which of the arguments is/are strong with respect to the question.

Question Should luxury hotels be banned in our country?

(I) No, affluent foreign tourists will have no place to stay.

(II) Yes, they are the places from where international criminals operate.

62. Before the opening of Pakyong, the nearest airport to Sikkim’s state capital of Gangtok was

63. Arms crossed across the chest would signify

64. What would be the best approach if your mistake at work has caused a loss to your organization?

65. The Statue of Unity is a tribute to

66. Which of the following should not form a part of y our introduction when you meet someone professionally?

(b)   Your likes and dislikes

(c)   Your business, trade, or industry

(d)   A brief description of your business

67. Which Washington Post columnist was killed inside the Saudi consulate in Istambul on October 2, 2018?

68. Which of the following is one of the two official languages of Uttar Pradesh?

69. The Battle of Plassey was fought between the British and

70. Kanchenjunga, the third tallest mountain in the world, lies on the border between

71. An institution of self-government for rural areas, constituted under article-243B of the Indian Constitution, is called

72. The Negotiable Instruments Act is an act to define and amend law relating to

(b)   Bills of lading, bills of exchange promissory notes

73. Which of the following states is the largest producer of food grains in India?

74. Which of these is not a computer programming language?

75. Which of the following is not a task performed by a CPU of a computer?

76. The Indian Constitution promises its citizens equality of

(a)   expression and belief

(b)   status and opportunity

77. Ray Tomlinson is credited for

(a)   Sending the first e-mail ever

(b)   Building the first computer

(d)   Development of the internet

78. Uttar Pradesh is famous for

79. The three brothers of Nathuram Godse who were members of RSS were

80. Which of the following Indian batswoman’s brother is a district level cricketer?