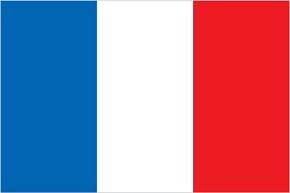 metropolitan France: Western Europe, bordering the Bay of Biscay and English Channel, between Belgium and Spain, southeast of the UK; bordering the Mediterranean Sea, between Italy and Spain;

Guadeloupe: Caribbean, islands between the Caribbean Sea and the North Atlantic Ocean, southeast of Puerto Rico;

Martinique: Caribbean, island between the Caribbean Sea and North Atlantic Ocean, north of Trinidad and Tobago;

Guadeloupe: Central America and the Caribbean;

Martinique: Central America and the Caribbean;

note: the first numbers include the overseas regions of French Guiana, Guadeloupe, Martinique, Mayotte, and Reunion

country comparison to the world: 44 exclusive economic zone: 200 nm (does not apply to the Mediterranean Sea)

continental shelf: 200-m depth or to the depth of exploitation

Mayotte: tropical; marine; hot, humid, rainy season during northeastern monsoon (November to May); dry season is cooler (May to November);

Reunion: tropical, but temperature moderates with elevation; cool and dry (May to November), hot and rainy (November to April)

note: to assess the possible effects of climate change on the ice and snow cap of Mont Blanc, its surface and peak have been extensively measured in recent years; these new peak measurements have exceeded the traditional height of 4,807 m and have varied between 4,808 m and 4,811 m; the actual rock summit is 4,792 m and is 40 m away from the ice-covered summit

much of the population is concentrated in the north and southeast; although there are many urban agglomerations throughout the country, Paris is by far the largest city, with Lyon ranked a distant second

volcanism: Montagne Pelee (1,394 m) on the island of Martinique in the Caribbean is the most active volcano of the Lesser Antilles arc, it last erupted in 1932; a catastrophic eruption in May 1902 destroyed the city of St. Pierre, killing an estimated 30,000 people;; La Soufriere (1,467 m) on the island of Guadeloupe in the Caribbean last erupted from July 1976 to March 1977;; these volcanoes are part of the volcanic island arc of the Lesser Antilles that extends from Saba in the north to Grenada in the south

signed, but not ratified: none of the selected agreements

largest West European nation; most major French rivers – the Meuse, Seine, Loire, Charente, Dordogne, and Garonne – flow northward or westward into the Atlantic Ocean, only the Rhone flows southward into the Mediterranean Sea