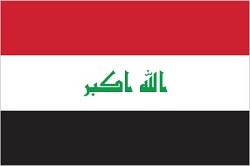 Middle East, bordering the Persian Gulf, between Iran and Kuwait

country comparison to the world: 60

population is concentrated in the north, center, and eastern parts of the country, with many of the larger urban agglomerations found along extensive parts of the Tigris and Euphrates Rivers; much of the western and southern areas are either lightly populated or uninhabited

government water control projects drained most of the inhabited marsh areas east of An Nasiriyah by drying up or diverting the feeder streams and rivers; a once sizable population of Marsh Arabs, who inhabited these areas for thousands of years, has been displaced; furthermore, the destruction of the natural habitat poses serious threats to the area’s wildlife populations; inadequate supplies of potable water; soil degradation (salination) and erosion; desertification; military and industrial infrastructure has released heavy metals and other hazardous substances into the air, soil, and groundwater; major sources of environmental damage are effluents from oil refineries, factory and sewage discharges into rivers, fertilizer and chemical contamination of the soil, and industrial air pollution in urban areas

signed, but not ratified: Environmental Modification