2. The mean of a numerical data-se is

(A)  continuous and differentiable.

(B)  continuous but not differentiable.

(C)  neither continuous nor differentiable.

(D)  not continuous but differentiable.

4. The pressure (P) versus volume (V) diagram given below represents reversible isothermal curves at temperatures, T1, T2 and T3 Considering one mole of ideal gas for all the three isothermal processes, which one of the following is TRUE?

6. The rate of dissolution of Al particles in liquid steel is proportional to concentration difference (∆C). ∆C is defined by:

8. The sieve analysis of ground quartz particles is given in the table below :

The cumulative mass fraction of particles of size less than 1.68 mm is ____ (answer up to two decimal places)

9. The sequence of precipitation to each stable equilibrium during ageing of Al-4.5 wt.% Cu alloy is:

10. Tungsten powder is pressed at 150 MPa to green density of 55%. After sintering, the compact attains 86.5% of its theoretical density. Assuming uniform shrinkage, the linear shrinkage (in%) is _______ (answer up to two decimal places)

11. For a FCC metal, radius of the largest sphere that can fit in the tetrahedral void (in nm) is ______ (answer up to three decimal places)

12. In an iron-carbon alloy containing 0.35 wt.% C, the mass fraction of pearlite just below the eutectoid temperature is _____(answer up to two decimal places)

14. Primary mechanisms of accommodating plastic strain at low temperatures in crystalline metals are:

15. Spherical α phase particles are depicted in the hypothetical microstructure section shown  below. Using the superimposed grid on the microstructure, the estimated volume fraction of α phase is _______(answer up to three decimal places) 17. Both creep resistance and tensile strength of a metal can be enhanced by

(A)  increase in the grain size

(B)  decrease in the grain size

18. Stress required to operate a Frank-Read source of length L is approximately given by:

19. The second peak in the powder X-ray diffraction pattern of a FCC metal occurs at a Bragg angle θ (in degrees) = _______(answer up to two decimal places)

20. A rod is elastically deformed by a uniaxial stress resulting in a strain of 0.02. If the Poisson’s ratio is 0.3, the volumetric strain is _______(answer up to three decimal places)

21. Four alloys, C1, C2, C3, C4, shown in the phase diagram are poured at temperature T1 in a mold. During solidification, which one of these alloys is expected to have the highest fluidity? is being wire drawn. The maximum strain per pass in annealed condition (assume ideal work and efficiency η = 1) is ______ (answer up to two decimal places)

23. Schematic diagram shows rolling of a slab. P and Q are points on the surface of the workpiece near entrance and exit, respectively. With reference to the work piece, which one of the following statements is TRUE? (B)  Frictional force is opposite to rolling direction at both P and Q.

24. Which one of the following manufacturing techniques is used for making window glass?

25. Dye penetrant test is based on the principle of

is to be evaluated numerically. Divide the integration interval into exactly 2 subintervals of equal length. Applying the trapezoidal rule, the approximate value of the integral is _______(answer up to two decimal places)

the following function is a solution:

Which one of the following statements is NOT TRUE?

(A)  λ has two values: one complex and one real

31. T1 and T2 are the melting points of pure metal A and pure stoichiometric oxide AO2, respectively, and T1 < T2. The stoichiometric metal oxidation reaction A(s) + O2(g) = AO2(s) is in equilibrium at 1 atm pressure at temperature less than T1. If the  temperature increases, which schematic represents the correct standard free energy change versus temperature plot? 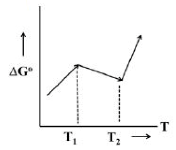 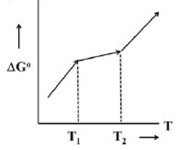 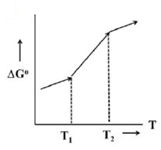 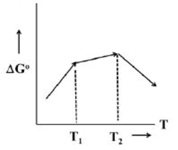 34. During the end blow period in LD steelmaking, the de-carburization rate is expressed by the equation :

35. CaCO3(s) dissociate in a closed system according to the reaction :

Assuming the reaction is in thermodynamic equilibrium, the degree(s) of freedom, F = ____

36. A ladle containing molten steel is being discharged. The relevant forces are listed in Column I Match them with their corresponding expressions in Column II.

37. In primary steelmaking, dissolved oxygen (O) reacts with carbon (C) to produce CO(g), at 1 atm pressure according to the reaction: C + C = CO(g). The equilibrium constant for this reaction is:

where T is in Kelvin. Assuming Henrian activity coefficient of both O and C to be unity, the dissolved oxygen content (in wt.%) of a plain carbon steel melt with 0.7 wt.% C at 1600℃ is ______ (answer up to four decimal places)

38. A stoichiometric mixture of CO and pure oxygen at 1 atm and 25℃ flows into a combustion reactor. The molar flow rate of CO entering the reactor is 1 kg-mol.h−1. The adiabatic flame temperature (in K) for the combustion of CO with stoichiometric oxygen is:_____

41. Pure metals A and B form two real binary solid solutions α and β at temperature T and pressure P. The free energy versus composition plots for both the solutions are shown below. The condition for chemical equilibrium is:

42. Pure orthorhombic sulfur transforms to stable monoclinic sulfur above 368.5 K. Applying Third law of thermodynamics, the value of entropy (in J.K−1 of transformation at 368.5 K is ______(answer up to two decimal places)

43. For homogeneous nucleation of solid in a liquid of pure metal, the critical edge length (in nm) of a cube shaped nucleus is _____(answer up to two decimal places)

44. Assuming the solid phases to be pure, the slope of line BC in the predominance area diagram schematically shown below is _____(answer up to two decimal places) 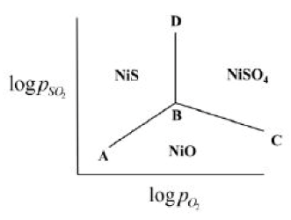 45. For each of the crystallographic system listed in Group-I, match the corresponding minimum symmetric in Group-II

46. Arrange the magnetic moment of neighboring atoms in a one-dimensional lattice in Group-I to the corresponding magnetic material in Group-II 47. For an intrinsic semiconductor , all room temperature electrical conductivity is 10−6Ω−1. If the electron and hole mobilities are 0.75 and 0.06 m2V−1s−1 respectively, the intrinsic carrier concentration (per m3) at room temperature is:

48. A steel component is subjected to fatigue loading : σ (maximum) = 200 MPa, σ(minimum) = 0. The component has an initial crack length of 1 mm. Propagation of crack is governed by

where, the crack length a is in meters, N is the number of cycles and ∆K is in Mpa.m1/2. The length of the crack (in m) after one million cycles will be _____(answer up to three decimal  places) 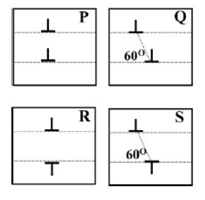 51. A single crystal of an FCC metal is subjected to a sufficiently large tensile stress along the [110] direction to activate some of the slip systems. Which one of the following slip systems will be activated.

52. A perfectly elastic-plastic material has a yield stress of 450 MPa and fractures at a strain of 0.45. The ratio of resilience to toughness for this material is _____(answer up to three decimal places)

(Assume that exponent (n) in Chvorinov’s equation is 2)

54. A 250 mm thick slab of a nickel alloy is subjected to cold rolling using a roll of diameter 450 mm. If the angle of bite during rolling is 10°, the maximum possible reduction (in mm) during rolling is ______(answer up to two decimal places)

55. W-Ni compact is prepared by liquid phase sintering at 1500℃. If the size of tungsten grains is 40 μm and the interfacial tungsten- tungsten and tungsten-nickel energies are 0.52 and 0.30 J.m−2 respectively, the predicted average neck size (in μm) of sintered tungsten grain is :