1. Which one of the following plots represents the relationship xy = c, where c is a positive constant

2. F(y) and f(y) are the probability distribution function and density function respectively of continuous variable Y in the interval (0, ∞). Which one of the following is TRUE?

3. The position vector of a moving particle is given by

in MPa acting on a plane having outward normal

6. If only two members form a truss joint and no external load or support reaction is applied to the joint, the members

(A)  have infinite force

(B)  have equal but opposite force

7. A multi-pint borehole extensometer is used to monitor

(A)  convergence  between the roof and the floor

(B)  strain between fixed points along a borehole

(D)  changing distances between fixed points along a borehole

9. The beam shown in the figure is hinged at one end and rested on a roller at the other end. The free body diagram of the system is

(D)  minerals A and B are produced in equal quantity

11. Semi-variogam modeling is used for reserve estimation of mineral deposit by

12. Which one of the following does NOT belong to the direct operating cost of mine?

13. Lane’s algorithm is applied to determine

(B)  mine production rate

14. In an underground coal mine a driller, wearing personal protective equipment, was going to workplace along the travelling roadway. A piece of rock fell down from the roof and hit the person on head causing serious injury. The cause of accident is

(A)  unsafe act of the driller

15. In a PERT network, the “time estimates” of an activity are the following: Optimistic time – 2 days, Most likely time – 4 days, and Pessimistic time – 12 days. The expected time and standard deviation of the activity in days are respectively

19. The Absolute amount of energy and density of a booster and ANFO are given below.

The Relative bulk strength of booster is _______

20. A deeply seated ore body dips at 70° having an average width of 60 m, The ore body, hanging wall, and footwall are competent. The suitable stoping method for this ore body is

21. The results of the crossing point temperature experiments for coal A and B are shown in the figure. The correct interpretation of the plot is that

22. The “yellow boy” formed due to acid mine drainage mainly consists of

23. A double ended ranging drum shearer is employed in a longwall mine of face length 150 m. The mining height is 3.5 m and depth of the web cut is 0.76 m. The cycle time for unidirectional cutting is 40 min. Considering bulk density of the coal to be 1.4 t/m3, hourly production from the face in tonne is ______

24. The strength of a stranded wire rope is proportional to

(A)  the diameter of the rope

(B)  square of the diameter of the rope

(C)  square root of the diameter of the rope

(D)  inverse of the diameter of the rope

25. A 20 m thick and 30 m wide confined aquifer has two monitoring wells spaced 500 m apart along the direction of groundwater flow. The difference in water level between the wells is 2 m. The hydraulic conductivity is 50 m/day. The rate of flow in m3/day is

28. The area of cross-section (x) of four rock samples and the respective applied loads (y) at failure under uniaxial loading are given below :

29. The following reading refer to a reciprocal leveling at staff stations A and B respectively:

30. The areas within the contour lines of a proposed site for an overburden dump are as follows: 31. Total ore mined from a sub-level open stope of a copper deposit is measured to be 100000 tonne. The ore recovery and ore dilution during stoping are 90% and 20% respectively. The in situ Cu grade of the ore in the stope is 0.65%. The selling price of copper is Rs. 400/kg of metal. Ignoring any other metal losses in the downstream process of the ore, the revenue generated by selling the ore in Crores of rupees is ______

32. The block grade model of an ore deposit is shown in the figure below. The relationship between block value per tone (Bv) in rupees and the block grade in percentage (x) is given below: The each square block contains 1000 tonne of material and the overall pit slope angle is 45°, the total value of pit determined by the floating cone algorithm in Lakhs of rupees is _____

33. A mine is being developed by bord and pillar method with a gallery size of 4.8 m ×4 m. The mine operates in 3 shifts per day and 6 faces are blasted per shift. The average pull per round of blast is 1.2 m and the bulk density of coal is 1.4 t/m3. If the OMS is 2.5, then the average manpower deployed in the development section per shift is ______

The maximum value of the objective function is ______

35. A mining company having three mines A, B and C supplies coal to three power plants P, Q and R located close to the mines. The daily production capacities of the three mines in tonnes are 700, 1200 and 1100 respectively. The daily requirements at the power plants in tones are 1000, 1000, and 1000 respectively. The transportation costs in rupees per tonne is given in the matrix below:

36. The series-parallel configuration of a system, consisting of 6 independent components A, B, C, D, E and F with their individual reliability, is

Shown in the figure :

The reliability of the system is _____

37. 500 coal miners were randomly selected from an underground coal mine. It was found that 50 workers experienced an injury in the year 2014. The distribution of injury based on younger age group (age ≤ 40 years) and older age group (age > 40 years) generated the following cross classification table.

40. Let σ1 and σ3 are major and minor principal stresses respectively. The equation σ1 = f(σ3) denotes the failure envelop of a rock as shown in the figure. Match the zones (P, Q, R and S) with the legend code. 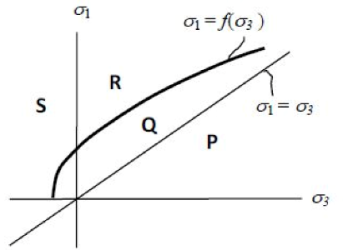 41. A blasted muck of mass m is being lifted from a shaft of diameter d by an arrangement of two pulleys as shown in the figure. Ignoring friction in the pulleys, as the height h decreases, tension in the ropes 42. The longitudinal section of stope is given in the figure. Match the different labeled stope features (P, Q, R, S and T) with their corresponding nomenclatures. 43. To break a volume of 30000 cubic meter of overburden per month in an open cast mine, the number of blast hole drills required for the following data is _____

44. Two inclined coal seams with their accesses are shown in the figure. Match the labeled access (P, Q, R, S) with their corresponding names. 45. Ground reaction curve (GRC) of a tunnel roof under hydrostatic stress field is given b y pg = 10 – 0.75u, where pg is the required support pressure in MPa and u is radial displacement in mm. A uniform support is installed at the boundary of the tunnel providing support reaction (SR) as ps = 1.5 – 3.0, for u ≥ 2 mm. Considering GRC = SR, the support pressure in MPa is _____

46. If the rank of the following matrix is less than 3, the values of x are

47. The discharge rate of a water pump is 0.25 m3/s. The diameter of the discharge and suction nozzles are 300 and 350 respectively. The measured pressure at the discharge end located 0.25 m above the centerline of the impeller is 150 kN/m2 and the pressure at the suction gage located at the centre line of the impeller 20 kN/m2. Specific weight of water is 9810 N/m3 The total dynamic head for the above installation in m is ______

48. In a mine, 200 and 250 persons are deployed in t he Panels A and B (shown in figure) respectively in the largest shift. The panel produce 400 and 500 tonne/day respectively. The resistances of panels A and B are 0.3 ns2m−8 and 0.4 Ns2m−8 respectively and the combined resistance of shaft and trunk airways is 0.5 Ns2m−8. The operating static pressure of the fan in Pa to provide the minimum air quantities in the panels as per CMR 1957 is ____

49. In an auxiliary ventilation system, a fan is installed inside a 100 m long and 600 mm diameter duct to ventilate a blind heading face. The frictional coefficient of the duct is 0.0066 Ns2m−4 and the static pressure characteristic of the fan is represented by :

50. A stream flowing at 15 m3/s has a tributary feeding into it with a flow rate of 7 m3/s. The concentrations of chloride at the upstream of the junction and that of the tributary are 30 mg/L, and 50 mg/L respectively. Treating chloride as conservative substance and assuming complete mixing of two stream, the concentration of chloride in mg/L at the downstream is ______

53. In a book of 600 pages, there are 60 typographical errors. Assuming Poisson distribution for the number of errors per page, the probability of no errors ini randomly chosen 4 pages is ______

54. Match the special methods of shaft sinking with rock mass conditions and scope of application. 56. The bacteria in milk are destroyed when it ____ heated to 80 degree Celsius.

All benches are beds. No bed is a bulb. Some bulbs are lamps.

Which of the following can be inferred?

i. Some beds are lamps.

ii. Some lamps are beds.

59. If the radius of a right circular cone is increased by 50%, its volume increases by

61. The old concert hall was demolished because of fears that the foundation would be affected by the construction of the new metro line in the area. Modern technology for underground metro construction tried to mitigate the impact of pressurized air pockets created by the excavation of large amounts of soil. But even with these safeguards, it was feared that the soil below the concert hall would not be stable.

From this, one can infer that

(A)  the foundations of old buildings create pressurized air pockets underground, which are difficult to handle during metro construction.

(B)  metro construction has to be done carefully considering its impact on the foundations of existing buildings.

(C)  old buildings in an area form an impossible hurdle to metro construction in that area.

(D)  pressurized air can be used to excavate large amounts of soil from underground areas.

62. Students applying for hostel rooms are allotted rooms in order of seniority. Students already staying in a room will move if they get a room in their preferred list. .Preferences of lower ranked applicants are ignored during allocation.

Given that data below, which room will Ajit stay in?

64. Two machines M1 and M2 are able to execute any of four jobs P, Q, R and S. The machines can perform one job on one object at a time. Jobs P, Q, R and S take 30 minutes, 20 minutes, 60 minutes and 15 minutes each respectively. There are 10 objects each requiring exactly 1 job. Job P is to be performed on 2 objects, Job Q on 3 objects, Job R on 1 object and Job S on 4 objects. What is the minimum time needed to complete all the jobs?

65. The bar graph below shows the output of five carpenters over one month, each of whom made different items of furniture: chairs, tables, and beds. Which one of the following is true?