is to be solved using the conditions y(0) = and y(1) = b, which of the following numerical method(s) can be used?

(A)  Euler with shooting method

(B)  Euler without shooting method

4. The numerical method used to find the root of a non-linear algebraic equation, that converges quadratically, is :

5. Which one of the following curves shows a typical behavior of the producing gas oil ratio (GOR) with time for a reservoir under solution gas drive? 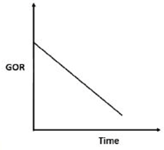 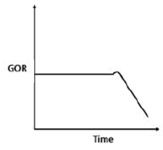 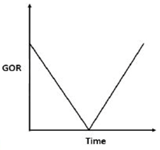 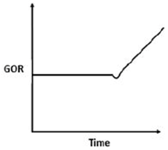 6. A student has written following possible causes of lost circulation during a drilling operation.

i. High salinity in the reservoir

ii. Fracture in the reservoir

iii. A fault encountered during drilling

Which of the above statements are correct?

7. For water depth less than 8 m, which one of the following drilling vessels is the most suitable and economical?

8. Which one of the following statements is correct for pseudo-steady state condition in a confined reservoir?

(A)  The pressure decline stops in the reservoir.

(B)  The pressure declines at the same rate across the reservoir.

(C)  The boundary pressure does not change.

(D)  The pressure starts increasing in the reservoir.

9. The roots of the equation

(A)  an ordinary differential equation of second order.

, the product YX will be:

13. As per the Bharat IV norms, the maximum permissible limit of sulfur in diesel in ppm is :

(A)  equal to the volume of gas hydrate.

15. For a centrifugal pump, the head developed by the pump is proportional to the :

(A)  speed of the impeller rotation.

(B)  square of speed of the impeller rotation.

(C)  cubic power of speed of the impeller rotation.

(D)  square root of speed of the impeller rotation.

16. Which of these is a must for petroleum generation and accumulation?

(C)  a fluid of equal viscosity but lower density is injected in a fluid of higher density.

18. Which of these is NOT a sedimentary rock?

the values of two real numbers (x, y) are, respectively:

21. Pick the INCORRECT inequality, where z1, z2 and z3 are complex numbers.

22. Which of the following is NOT true?

23. Which of the following is a potential environmental threat due to the cement-plug deterioration in an abandoned oil well?

(A)  Well bore could leak oil reservoir fluids into groundwater

24. _______ is a mode of flame propagation in a pre-mixed gas, and drives a leading shock front into the quiescent, unburnt gas at supersonic velocity, immediately followed by a combustion zone.

25. Bio-Ga(BG), Coal Bed Methane (CBM) and Methane Gas Hydrate (MGH), if arranged in the order of increasing methane content, the correct order is :

26. For a velocity field given by

calculate the curl of

If the calculated vector is

numerically from x = 0 to 1 using explicit, forward, first order Euler method with initial condition of y(0) = 1 and step size (h) of 0.2. The absolute value of error in y(1) calculated using analytical and numerical solution is _____% (calculate the error using analytical solution as the basis and use three decimal places) 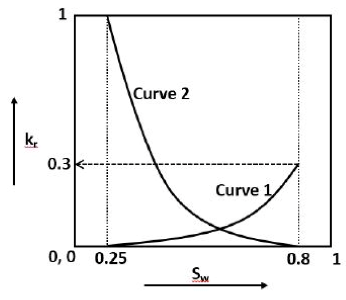 30. An oil reservoir of 1000 m2 area and thickness of 10 m has a porosity of 30%. The connate water saturation is 20%. Initial formation volume factor

Assuming average oil flow rate of 2 m3/day (at surface condition), the life of reservoir is _____ days.

32. In a directional well, the kick off point has a true vertical depth (TVD) of 1000 m and the end of buildup section has a TVD of 1200 m. The buildup section for directional drilling has a horizontal displacement of 200 m, after which the tangent section has inclination of 45°. A driller monitors the well from the surface location of the well and sees that the target has horizontal departure of 1000 m. The T VD of the deepest point of the well is _____meters. 34. A laboratory air-brine capillary pressure of 1.20 × 105 N/m2 has been measured in a reservoir core sample at residual water saturation. The air-brine surface tension is 0.070 N/m, and the brine-oil interfacial tension for the reservoir fluid is 0.025 N/m. The density values of brine and oil are 1080 kg/m3 and 780 kg/m3, respectively. Take g = 9.81 m/s2, and assume identical wetting preferences for the core sample and reservoir. The height of the water-oil transition zone (up to the point of reservoir where connate water saturation is reached) from the free water level is ____meters. (write answer with two decimal places)

35. The eigenvalues for the matrix

36. The temperature time profile for a system is given as follows:

37. A porous medium is blended with three types of sediment fractions, fine pebble gravel with porosity (ϕpebble = 38%), sand (ϕsand = 32%) and fine sand(ϕfine_sand = 30%). The three sediments are mixed in such proportions that the sand fills the pore volume of fine pebbles completely, and the fine sand fills the pore volume of sand completely. The total porosity of such an irregular system is ______%. (write answer with two decimal places)

39. Oil of density 900 lg/m3 is flowing at 100 m3/day through a horizontal pipeline having a diameter reduction from 0.1 m to 0.05 m as shown in the following figure. The kinetic energy pressure drop (P1 – P2) caused by the diameter change is _____N/m2. (Assume frictional losses to e negligible, write answer with one decimal place)

40. Match the following EOR techniques and the principle behind them:

(I) Lower the viscosity of the oil phase

(II) Increase the viscosity of the aqueous phase

(IV) Influence the wettability of the rock

41. The viscosity – shear rate curve for a fluid is shown in the following plot. Which one of the following options best describes the behavior of the fluid in the regions I, II, and III, respectively? 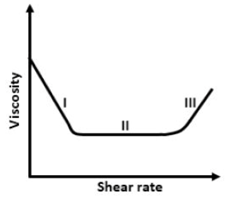 is a valid probability density function, is (given, a ≥ 0):

45. The average reservoir pressure and fracture gradient of petroleum formation at a depth of 4,000 m are 30,000 kN/m2 and 16(kN/m2)/m, respectively. The density of the formation is 2290 kg/m3. If the reservoir pressure declines to 20,000 kN/m2 after a few years of production, the fracture gradient of the formation is ____(kN/m2)/m. (write answer with one decimal place)

47. The sonic log travel time in a loosely consolidated formation is 260 μs/m. The matrix and fluid travel times are 130 μs/m and 618 μs/m, respectively. A correction factor of 1.0 may be used in a Wyllie time average equation for simplification. The calculated formation porosity using the Wyllie time average equation is _____%. (write answer with two decimal places)

48. An oil emulsion having 15% water cut by weight is being treated in a horizontal heater-treater unit at the rate of 6000 kg/hr. The inlet temperature of the emulsion is 30℃ and operating temperature of the heater-treater is 40℃. The specific heat capacity of water and oil are 1 kcal/kg℃ and 0.5 kcal/kg℃, respectively. Assuming 10% of the total heat input is lost to the surroundings, the total heat energy required to break the emulsion in the heater-treater unit is ______kcal/hr. (write answer with one decimal place)

49. An oil well has a flowing bottom hole pressure of 3000 psi and the reservoir has an average pressure of 3250 psi. A pressure build-up test reveals that the slope of the straight line portion of Horner’s plot is 38.5 psi/cycle and skin factor of the well is 3. The flow efficiency of this well is _____. (write answer with two decimal places)

(I) Requires natural or artificial fractures

52. Match the following in the context of treatment of oil spills:

(IV) Oleophilic material to attract oil, which can be removed subsequently

(II) Evaporite rocks, such as halide or anhydrite, retarding upward movement of water/CO2

(IV) Rocks with sufficient permeability to conduct water, into which water (or CO2) may be injected

54. Synthetic Aperture Radar (SAR), used for oil spill monitoring and detection, is based on the:

(A)  dampening effect oil has on capillary and short ocean surface waves, as seen in the radar backscatter signal.

(B)  radar backscatter signal only from navigating ships.

(C)  frequency change in the radar backscatter signal from flights over the sea.

55. The adjacent figure shows the phase diagram of free methane gas and methane hydrate for a pure water and pure methane system. Match the zone marked (I), (II), (III) and (IV) with different states of phases listed below.