1. Identical charges q are placed at five vertices of a regular hexagon of side a. The magnitude of the electric field and the electrostatic potential at the centre of the hexagon are respectively

3. Light is incident from a medium of refractive index n = 1.5 onto vacuum. The smallest angle of incidence for which the light is not transmitted into vacuum is ____ degrees. (up to two decimal places).

6. In the figure given below, the input to the primary of the transformer is a voltage varying sinusoidally with time. The resistor R is connected to the centre tap of the secondary. Which one of the following plots represents the voltage across the resistor R as a function of time? 8. Consider a one-dimensional lattice with a weak periodic potential

The gap at the edge of the Brillouin zone

9. Consider a triatomic molecule of the shape shown in the figure below in three dimensions. The heat capacity of this molecule at high temperature (temperature much higher than the vibrational energy scales of the molecule but lower than its bond dissociation energies) is:

which one of the following is TRUE?

(B)  Canonical momentum changes, equation of motion does not change

(C)  Canonical momentum does not change, equation of motion changes

(D)  Both the canonical momentum and equation of motion change

11. Two identical masses of 10 gm each are connected by a massless spring of spring constant 1 N/m. The non-zero angular eigenfrequency of the system is ______ rad/s. (up to two decimal places).

12. The phase space trajectory of an otherwise free particle bouncing between two hard walls elastically in one dimension is a

14. The wavefunction of which orbital is spherically symmetric :

evaluated along a contour going from −∞ to +∞ along the real axis and closed in the lower half-plane by a half circle is equal to _____.(up to two decimal places).

17. Which one of the following conservation laws is violated in the decay τ+ → μ+μ+μ−

(B)  C non-conserving but CP conserving

19. A one dimensional simple oscillator with Hamiltonian

is subjected to a small perturbation, H1 = αx + βx3 + γx4. The first order correction to the ground state energy is dependent on

are the Pauli matrices, the ground state energy is

22. The degeneracy of the third energy level of a 3-dimensional isotropic quantum harmonic oscillator is

23. The electronic ground state energy of the Hydrogen atom is −6 eV. The highest possible electronic energy eigenstable has an energy equal to

24. A reversible Carnot engine is operated between temperatures T1 and T2 (T2 > T1) with a photon gas as the working substance. The efficiency of the engine is

26. Three charges (2C, −1C, −1C) are placed at the vertices of an equilateral triangle of side 1m as shown in the figure. The component of the electric dipole moment about the marked origin along the 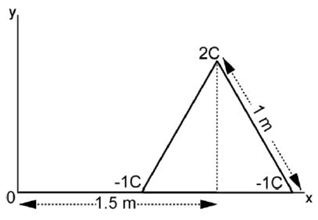 27. An infinite solenoid carries a time varying current I(t) = At2, with A ≠ 0. The axis of the solenoid is along the

are the usual radial and polar directions in cylindrical polar coordinates.

is the magnetic field at a point outside the solenoid. Which one of the following statements is true?

30. The minimum number of NAND gates required to construct an OR gate is

32. The total energy of an inert-gas crystal is given by

, were R is the inter-atomic spacing in Angstroms. The equilibrium separation between the atoms is ______ Angstroms. (up to two decimal places).

33. Consider N non-interacting, distinguishable particles in a two-level system at temperature T. The energies of the levels are 0 and ε, where ε > 0. In the high temperature limit (kBT >> ε), what is the population of particles in the level with energy ε?

34. A free electron of energy 1 eV is incident upon a one-dimensional finite potential step of h eight 0.75 eV. The probability of its reflection from the barrier is ______(up to two decimal places).

40. Let X be a column vector of dimension n > 1 with a t least one non-zero entry. The number of non-zero eigenvalues of the matrix M = XXT is

42. A uniform solid cylinder is released on a horizontal surface with speed 5 m/s without any rotation (slipping without rolling). The cylinder eventually starts rolling without slipping. If the mass and radius of the cylinder are 10 gm and 1 cm respectively, the final linear velocity of the cylinder is ______ m/s. (up to two decimal places).

43. The energy density and pressure of a photon gas are given by u = aT4 and P = u/3, where T is the temperature and a is the radiation constant. The entropy per u nit volume is given by αaT3. The value of α is ______.(up to two decimal places).

44. Which one of the following gases of diatomic molecules is Raman, infrared, and NMR active?

45. The π+ decays at rest to μ+ and vμ. Assuming the neutrino to be massless, the momentum of the neutrino is ____ MeV/c. (up to decimal places)

46. Using Hund’s rule, the total angular momentum quantum number J for the electronic ground stat of the nitrogen atom is

47. Which one of the following operators is Hermitian?

for this lattice are, respectively

51. The geometric cross-section of two colliding protons at large energies is very well estimated by the product of the effective sizes of each particle. This is closest to 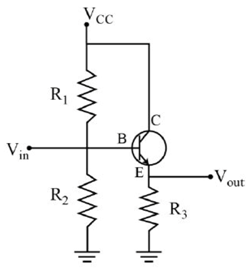 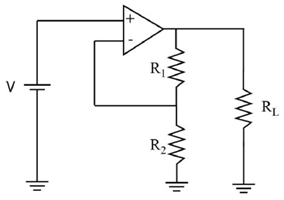