Directions (Qs. 1 to 5): Read the following passage carefully and answer the questions given below:

1. On the basis of the passage which of the following statements may be said to be correct?

(B)  The speaker is an aggressive and maniacal war-monger

2. The speaker in the passage wants to go on fighting because:

(A)  He is a raving lunatic

(B)  He is in a state of utter despair

(C)  He expects help from other quarters

(D)  He is the leader of a suicide squad

3. Which of the following pair of the phrases helps best to bring out the intention of the speaker?

(B)  “Growing confidence”, “subjugated and starving”

(C)  “Subjugated and starving”, “fighting on the landing ground”

(D)  “Fighting in the streets”, subjugated and starving”

4. The passage consists of repetitive patterns in syntax and vocabulary. The effect of th is style is that it:

(A)  Reveals the speaker’s defects in giving a speech

(B)  Produces the impression of bad poetry

5. The tone of the speaker is:

(A)  Pleading and urging

(B)  Inspiring and encouraging

Directions (Qs. 6 to 8):  In each of the following, choose the word most similar in meaning to the word given in capitals.

(B)  Run off secretly

(B)  To become puzzling

Directions (Qs. 9 and 10): In each of the following, choose the word most nearly opposite in meaning to the word given in capitals:

Directions (Qs. 11 to 15): In each of the following questions, find out which part has an error.

13. I told him on his face (A)/ that he could not hope (B)/ to pass the stringent (C)/ Medical examination of the Services Selection Board (D).

Directions (Qs. 16 to 20): Pick up the most effective word from the given words to fill in the blanks to make the sentence meaningfully complete.

19. Hari got the company car for a ______ price as he was the senior most employee in the company.

20. The unruly behavior of the soldiers _____ their commander.

21. Who accorded the title ‘Mahatma’ to MK Gandhi?

22. The Non Co-operation Movement started in which year?

23. During the Middle Ages education was confined only to:

24. Who among the following was responsible for the spread of Buddhism in Sri Lanka?

25. The elements which have low value of ionization potential are strong:

(C)  Oxidising and Reducing agents depending upon the reactants

26. Wayne Rooney, the famous footballer, hails from which country?

27. The official song ‘WakaWaka’ of FIFA World Cup held in the year 2010 at South Africa was sung by which popular singer?

28. In the year 2011, the ace badminton player Saina Nehwal was honoured with which sports award?

29. Term ‘Visible Horizon’ in astronomy is defined as:

(A)  The circle of contact of the earth and the cone of visual rays passing through the meridian of the place.

(B)  The circle of contact of the earth and the cone of visual rays not passing through the meridian of the place.

(C)  The circle of contact of the earth and the cone of visual rays passing through the point of observation.

(D)  The circle of contact of the earth and the cone of visual rays not passing through the point of observation.

(A)  Northern slopes of the Kailash range

(B)  Spring at Verinag

32. Limonitic ore is the ore of which metal?

33. Black revolution relates to which of the following?

(A)  Self-dependence in foodgrains production

(B)  Self-dependence in milk production

34. Karrar is the unmanned bomber aircraft of

35. Who is the author of book ‘Keeping the Faith: Memoirs of a Parliamentarian?

37. The cell wall in plants is interrupted by narrow pores carrying fine strands of cytoplasm which interlink the contents of the cells. These strands are called:

38. Who is the cricketer bestowed with an honorary commission in the Territorial Army?

40. Which of the following compounds form nitrites with nitrous acid?

41. The number whose square is equal to the difference of the squares of 37 and 23 is:

42. The average age of 8 men is increased by 4 years when one of them whose ages is 30 years is replaced by a new man. What is the age of new man?

47. A man’s average monthly expenditure for the first four months of the year was Rs 231.25. For the next five months, the average monthly expenditure was Rs 22.75 more than what is was during the first four months. If the person spent Rs 605 in all during the remaining three months of the year, find what percentage of his annual income of Rs 3500 did he save in the year?

(D)  Cannot be determined due to insufficient data

50. Srinivasan invests two equal amounts in two banks giving 8% and 12% rate of interest respectively. At the end of year, the interest earned is Rs 1500. Find the sum invested in each.

51. The simple interest accrued on a sum of money at the end of four years is 1/5th of its principal. What is the rate of interest per annum?

53. In an election between two candidates, 70% of the voters cast their votes. Out of which 2% of the votes were declared invalid. A candidate got 7203 votes which was 60% of the total valid votes. Find the total number of voters enrolled in that election.

54. If the price of kerosene be raised by 11%, find by how much per cent a house holder must reduce his consumption of kerosene so as not to increase his expenditure?

Directions (Qs. 61 to 65): Choose the word which is least like the other words in the group

Directions (Qs. 66 to 70): The following questions consist of two words that have a certain relationship to each other, followed by four alternatives. Select the best alternative that has the same relationship as the original pair of words

Directions (Qs. 71 to 80): Three words in bold letters are given in each question, which have something in common among themselves. Out of the four given alternatives, choose the most appropriate description about these three words.

(B)  They are plays by Shakespeare.

(C)  They are characters from various dramas.

(D)  They were romantic heroes.

(A)  These are sites of volcanoes.

(B)  These are island countries.

(C)  These are hills of Italy.

(D)  These lie in polar region.

(D)  They are units of measurement.

(A)  They are famous for oil fields

(B)  They are famous religious places.

(C)  They are tourist places of South India.

(D)  They are famous for handlooms.

(A)  These are missionaries

(B)  These are churchmen.

(C)  These are chessmen.

(D)  These are ranks of military.

(A)  They are character actors.

(B)  They are directors of Bengali movies.

(C)  They are famous poets and writers.

(D)  These personalities belong to Bengal.

(A)  They are ancient arts found in sculptures.

(C)  They are ancient scripts.

(D)  They are means of communication of prehistoric age.

(A)  They are steel plants.

(C)  They have atomic power plants.

(A)  These are cactus plants.

(B)  These are wild plants.

(C)  These are wild flowers.

(D)  These are leafy vegetables.

(A)  They were social reformers.

(B)  They were famous poets.

(D)  They were yoga instructors. 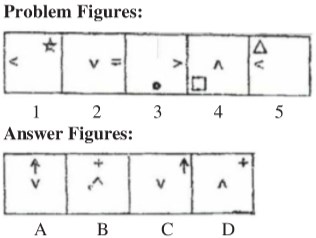 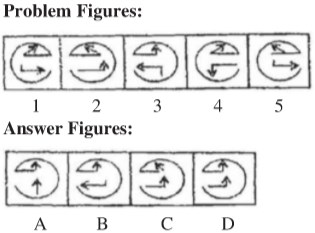 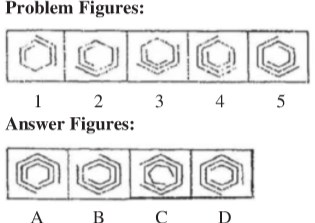 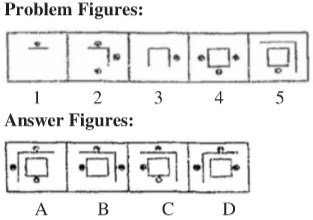 Directions (Qs. 86 to 90): The following situations involve a cluster of three or more geometrical figures, having one or more dots placed at any point inside the cluster. This cluster is followed by a set of four alternative figures each composed of a cluster of the same type of figures. Now, for each dot we have to observe the region in which it is enclosed i.e., in which of the geometrical figure this region is common.

From amongst the figures marked A, B, C and D, select the figure which satisfied the same conditions of placement of the dot as in Fig. (X)

Directions (Qs. 96 to 100): In each of the following questions, a part of the figure is missing. Find out from the given options A, B, C or D, the right figure to fit in the missing figure (X).