Directions (Qs. 1 to 4): Read the following passage carefully and answer the questions given below:

And then Gandhi came. He was like a powerful current of fresh air that made us stretch ourselves and take deep breaths, like a beam of light that pierced the darkness and removed the scales from our eyes, like a whirlwind that upset many things but most of all the working of people’s minds. He did not descend from the top; he seemed to emerge from the millions of India, speaking their language and incessantly drawing attention to them and their appalling condition. Get off the back of these peasants and workers, he told us, all of you who live b their exploitation; get rid of the system that produces this poverty and misery.

1. Gandhi came like a powerful current of fresh air and ……

(B)  made us patriotic

(C)  emboldened us to attack and destroy the oppressors

(B)  made India powerful

(C)  made the condemnation of the exploiter final

Directions (Qs. 5 to 10): Select the most appropriate word from the options against each number:

Those living in the slums are 5 and tough because they are totally 6 to the vagaries and hardships of life. The rising sun 7 the day and the setting sun closes the day for them. It is like a drama where the curtain 8 up in the morning and comes down in the evening. They don’t 9 hypertension and heart attacks because there is, after all 10 to worry about.

Directions (Qs. 11 to 12): Choose the word which is nearest in meaning to the given word.

Directions (Qs. 13 to 15): Choose the word which is nearly opposite in meaning to the given word.

Directions (Qs. 16 to 20): Choose the word that best defines the given phrase.

17. ‘A written account of the life of an individual’

18. ‘The identification of a disease by its symptoms’

20. ‘A style in which a writer makes a display of his knowledge’

26. Who was the Governor-General of India during the ‘Sepoy Mutiny’?

27. Which of the following statements is incorrect?

(B)  Diu is an island in the Gulf of Khambhat

(D)  Dadar & Nagar Haveli were under French colonial rule till 1954.

28. On which river is Washington DC situated?

(A)  Its velocity never changes

(B)  Its speed will always changes

(D)  Its speed may or may not change

30. Which of the following is not an agency of UN?

31. Which kind of missile of BRAHMOS?

32. Which of the following is not a unit of energy?

33. Who among the following has been called the ‘Napoleon of India’?

35. Which amongst t he following has the power to regulate the right of citizenship in India?

36. The Baglihar Hydroelectric power project in J & K is built across the river ……….

37. Which Indian sportsperson was appointed ‘Messenger of Peace’ in 2001 by the UN?

39. Which is the longest bone in the human body?

40. A US team of scientist has found that the mechanism responsible for the ageing process is located ………..

(A)  Inside the face

(B)  Inside the skin

(C)  Inside the brain

(D)  Inside the heart

42. Indian Institute of Science, Bangalore was founded by …….

43. Which among the following is not a gallantry medal?

44. Which one of the following pairs of water bodies are connected by the Suez Canal?

(B)  This was desired by the farmers of India

(D)  It was an auspicious day

47. Which of the following is not correctly matched?

Directions (Qs. 53 to 55): Choose the most appropriate word.

Directions (Qs. 56 to 58): Each of the following questions has four statements. Three are logically correct Some of which may look factually absurd. Ignore this absurdity and look to the logical corrections. Choose the statement which is wrong or doubtful.

(B)  Some boys steal. All who steal are naughty. All naughty are honest. Therefore, some boys are honest

(C)  All girls like dance. Some girls are Indian. All Indians are artists. Therefore, some artists like dance.

(A)  Ramesh is tall. Ramesh is a boy. Therefore, boys are tall.

(A)  All books can read. Some pencils are books. All pencils are clever. Therefore, all clever cannot read.

(D)  All that is given is black. Trees are green. Therefore, trees are black.

59. Statement: “You won’t get sweets at any cost. I will not let you eat things that are not good for your teeth” – a mother tells her child

(i) The mother cares for her child.

(ii) Sweets are not good for her child.

(iii) The mother has the authority to decide what her child is to eat.

(D)  All are implicit

60. Statement: “Clearly, the judiciary cannot provide all answers. But it seems the public, weary of an inactive Executive, is turning to the Supreme Court as a last resort” – an article.

(i) The Supreme Court is above the Executive.

(ii) The Supreme Court is more active than the Executive.

(iii) The Executive does not have sufficient powers.

Directions (Qs. 61 to 62): Choose the word which is least like the other words in the group.

Directions (Qs. 63 to 67): The following questions consist of two words that have a certain relationship to each other, followed by four alternatives. Select the best alternative that has same relationship as the original pair of words.

Directions (Qs. 68 to 70): There is certain relationship between two given words on one side of : : and one word is given on another side of : : while another word is to be found from the given alternatives, having the pair has. Select the best alternative/relationship.

Directions (Qs. 71 to 85): Choose the most appropriate answer.

71. An article costs Rs 50 presently. The rate of inflation is 300%. What will be cost of this article after two years?

72. A dishonest shopkeeper professes to sell his groceries at his cost price, but uses a false weight of 900 grams for each kilogram. Find his again percentage.

75. There were 24 students in a class. One of them, who was 18 years old, left the class and his place was filled up by a new comer. If the average of the class was thereby lowered by 1 month, the ago of new comer is

76. Find two natural numbers whose sun is 85 and the least common multiple is 102.

77. In a fort there was sufficient food for 200 soldiers for 31 days. After 27 days, 120 soldiers left the fort. For how many extra days will the rest of the food last for the remaining soldiers?

78. 10 is added to certain number, the sum is multiplied by 7, the product is divided by 5 and 5 is subtracted from the quotient. The remainder left is half of 88. What is the number?

79. 19 persons went to a hotel for a combined dinner party. 13 of them spent Rs 79 ach one their dinner and the rest spent Rs 4 more than the average expenditure of all the 19. What was the total money spent by them?

82. The sum of two numbers is equal to thrice their difference. If the smaller of the numbers is 10 find the other number.

84. A sum of money invested at simple interest triples itself in 8 years. How many times will it become in 20 years time?

Directions (Qs. 86 to 89): In these tests you will find an Incomplete Figure and four Answer Figures. You have to select one diagram from the Answer Figures which fits into the blank column in Incomplete figure in order to complete it: 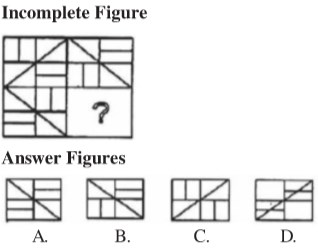 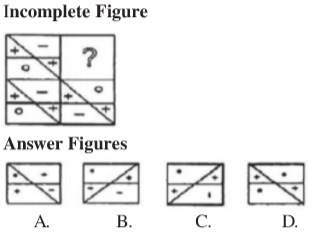 Directions (Qs. 98 to 100): In these tests Figure X is Hidden in the option figures. Find the Correct option.