1. Which city is the capital of Uzbekistan?

2. WHO (World Health Organization) headquarters is located in which city?

3. Mohiniyattam dance belongs to which of the following states?

4. Thomas cup is associated with which game?

5. PV Sindhu won against which player in Indian Open 2017?

6. Who is appointed as Chief of Air Force?

8. Which is the most abundant element in the universe?

9. Which of the following person is not a Bharat Ratna Awardee?

10. Where is the prarie grassland located?

11. Atlas mountain is in which continent?

12. Where was the first conference of Indian National Congress was held?

13. From where Gandhiji started satyagraha?

16. Who was the Defence Minister of India during the 1962 Indo-China war?

19. On which river, Baglihar dam is built?

20. “The old man and the sea” book is written by which Nobel Prize winner?

21. Which are the main gases present in Sun?

(A)  Hydrogen and Helium

(B)  Hydrogen and Argon

22. Surface temperature of Sun is about?

23. Which of the radioactive material is largely associated with bone cancer?

31. Two taps A and B can fill a cistern in 30 minute and 45 minute respectively. There is third exhaust tap C at the bottom of the tank. If all the taps are opened at the same time the cistern will be full in 45 minute. In what time can exhaust tap C empty the cistern when full?

32. Two trains are moving in the same direction at the rate of 80 km/hr and 50 km/hr. The faster train crosses a man in the slower train in 27 seconds. What is the length of faster train?

34. A boat covers a distance from A to B down stream and B to A upstream in 4 hours. If the speed of the stream is 2 km/hr and the speed of boat in still water is 4 km/hr, then the distance between A and B is:

36. In a library 40% books are of English, 80% of the rest books are of Hindi and remaining 300 books are of other languages. The number of books in the library is:

37. Mohan sold two calculators for Rs 990 each. On one calculator he gained 10% and on the other he lost 10%, find his gain or loss in the transaction:

He scores 129 runs in 12th innings. Now his average is increased by 9 runs. What is the value of

45. A starts a business with Rs 3500 and after 5 months B joins with A as his partner. After a year, the profit is divided in the ratio 2 : 3. What is B’s contribution in the capital?

46. A is older than B by 5 years. Seven years hence, thrice A’s age shall be equal to four times that of B. The present age of A is:

48. A vessel contains mixture of liquids A and B in the ratio 3 : 2. When 20 litre of the mixture is taken out and replaced by 20 litre of liquid B, the ratio changes to 1 : 4. The quantity of liquid A initially present in the vessel was:

Directions (Q. Nos. 51 to 55): Choose the word which is nearly opposite in meaning to the given word:

Directions (Q. Nos. 56 to 60): Choose the word which is nearest in meaning to the given word:

Directions (Q. Nos. 66 to 70): Which word or words explain the meaning of the following idioms:

(C)  A decisive defeat or failure

67. Sitting on the fence

(A)  Ability to win at gambles

(B)  Ability to speak with eloquence and fluency

(A)  Eating too much

Directions (Q. Nos. 71 to 75): Read the following passage carefully and answer the questions given below it.

Men have never succeeded in keeping free from ware in the past. Nor are they likely to do so in the future as they are organized in separate nations states, each able to plunge the world into war whenever the governor or the dictator, who happens to control the government, believes, however, wrongly, that he can obtain an advantage for himself and his country by so doing. Only some form of world government which control all the world’s armed forces and against which no single nation or group of nations could wage war since they would not have the wherewithal to do so, can finally save the world from war.

Secondly, science, by accelerating man’s speed of movement, has made the world into a single whole. Hence, any war, which broke out anywhere, will destroy the whole of civilization and not merely some part of it. That is why the new powers, conferred upon man by science, increasingly demand a world government if they are not to  result in man’s destruction.

71. According to the passage, one of the main achievements of science is

(A)  the invention of fast-moving vehicles

(B)  the exploitation of natural resources of the world

(C)  integration of mankind into a single unit

72. According to the writer, was occur because

(A)  some governments are run by thoughtless dictators

73. The writer pleads strongly for the elimination of ware because it would

(A)  destroy precious resources that can be used for social development.

(B)  lead to death and injuries on a large-scale

(C)  benefit the ruler or the dictator

74. The need for a world government is all the more urge in modern time because

(A)  all nations are sick and tired of wars

(B)  scientific development has made national boundaries redundant

75. In order to have a world without ware the writer wants to

(A)  eliminate clash of interest between nation states

Directions (Q. Nos. 76 to 80): In each of the following questions, four words have been given, ,out of which three are alike in some manner and the fourth one is different. Choose out the odd one.

81. Which of the following diagram correctly represents the relationship amongst

82. Which of the following diagram represents the relationship among Citizens, Educated and People?

83. Which figure best represent the relation among Man, Vegetables and Cow? 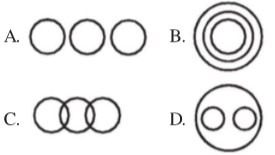 84. Which diagram best represents the relationship among classes given below? 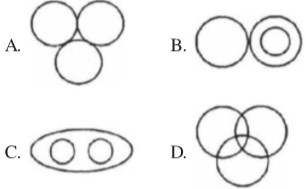 85. Which of the following figure represents the relationship among Brinjal, Meat, Vegetables?

86. Statement: The increasing population of our nation will lead to depletion of many essential resources.

(I) Population of our nation can be controlled.

(II) The nation will not be able to provide a decent living to its citizens.

(A)  Neither I nor II follows

(B)  Only conclusion I follows

(D)  Either I or II follows

(I) Some books are mobile.

(II) Some calculators are mobiles.

(I) Some mobiles are calculators.

(II) Some mobiles are books.

(II) All gardens are pots.

(A)  Only conclusions I follows

(I) Some phones are watches.

(II) All watches are guns.

(I) All guns are watches.

(II) Some guns are phones.

(C)  Either I or II follows

(I) All furnitures are pens.

(II) All pens are pencils.

(I) Some furnitures are pencils.

(II) All pencils are furnnitures.

(D)  Neither I or II follows

91. Which answer figure will complete the question figure? 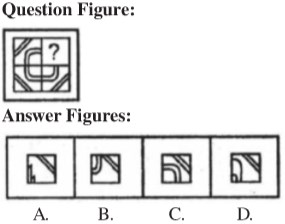 92. Which answer figure will complete the pattern in the question figure? 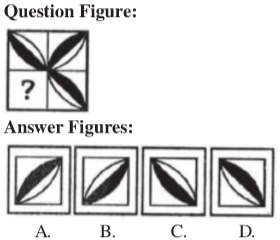 Directions (Q. Nos. 93 to 95): In each of the following questions, select the related word from the given alternatives.

Directions (Q. Nos. 96 to 99): In each of the following questions, a series is given, with one number  missing. Choose the correct alternative from the given ones that will complete the series.

100. In this diagram, a total number of 100 players play different games. 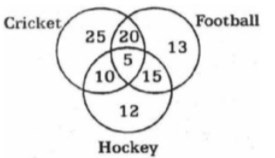 How many players play Football and Hockey but not Cricket?