are three orthogonal vectors. Given that

the vector is parallel to

where u(x, y) is a scalar function. Then

3. A box has 8 red balls and 8 green balls. Two balls are drawn randomly in succession from the box without replacement. The probability that the first ball drawn is red and the second ball drawn is green is 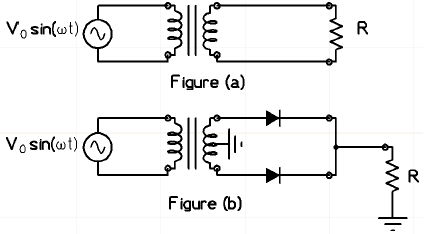 6. The input 𝑥[𝑛] and output 𝑦[𝑛] of a discrete-time system are related as y[n] = αy[n − 1] + x[n]. The condition on 𝛼 for which the system is Bounded-Input Bounded-Output (BIBO) stable is

8. The loop-gain function L(s) of a control system with unity feedback is given to be

9. If each of the values of inductance, capacitance and resistance of a series LCR circuit are doubled, the Q-factor of the circuit would

10. In the circuit shown below, the input voltage Vin is positive. The current (I) – voltage (V) characteristics of the diode can be assumed to be I = I0eV/VT under the forward bias condition, where VT is the thermal voltage and I0 is the reverse saturation current. Assuming an ideal op-amp, the output voltage Vout of the circuit is proportional to 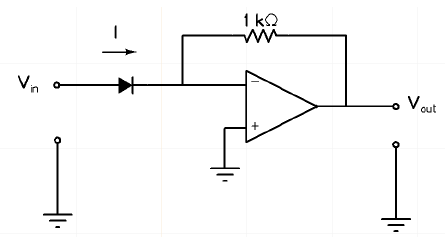 13. Thermocouples measure temperature based on

14. Four strain gauges in a Wheatstone bridge configuration are connected to an instrumentation amplifier as shown in the figure. From the choices given below, the preferred value for the common mode rejection ratio (CMRR) of the amplifier, in dB, would be 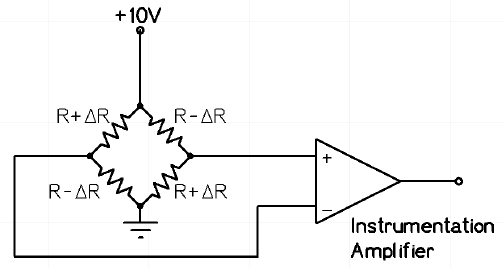 15. In a single-mode optical fiber, the zero-dispersion wavelength refers to the wavelength at which the

(A) material dispersion is zero.

(B) waveguide dispersion is zero.

19. In the circuit shown below, initially the switch S1 is open, the capacitor C1 has a charge of 6 coulomb, and the capacitor C2 has 0 coulomb. After S1 is closed, the charge on C2 in steady state is ________coulomb.

20. An 8-bit weighted resistor digital-to-analog converter (DAC) has the smallest resistance of 500 Ω. The largest resistance has a value ________k Ω.

21. The total number of Boolean functions with distinct truth-tables that can be defined over 3 Boolean variables is_________.

22. The figure below shows the 𝑖𝑡ℎ full-adder block of a binary adder circuit. Ci is the input carry and Ci+1 is the output carry of the circuit. Assume that each logic gate has a delay of 2 nanosecond, with no additional time delay due to the interconnecting wires. If the inputs Ai , Bi are available and stable throughout the carry propagation, the maximum time taken for an input Ci to produce a steady-state output Ci+1 is _____ nanosecond.

24. A pitot-static tube is used to estimate the velocity of an incompressible fluid of density 1 kg/m3. If the pressure difference measured by the tube is 200 N/m2, the velocity of the fluid, assuming the pitot-tube coefficient to be 1.0, is _______m/s.

28. The dynamics of the state

of a system is governed by the differential equation

Given that the initial state is

the steady state value of

30. In a control system with unity gain feedback, the plant has the transfer function P(s)= 3/s . Assuming that a controller of the form C(s) = K/ (s + p) is used, where 𝐾 is a positive constant, the value of p for which the root-locus of the closed-loop system passes through the points −3 ±j3√3 where j=√−1 , is

31. The forward path transfer function L(s) of the control system shown in Figure (a) has the asymptotic Bode plot shown in Figure (b). If the disturbance d (t) is given by d(t) = 0.1sin(ωt) where ω = 5 rad s , the steady-state amplitude of the output y(t) is 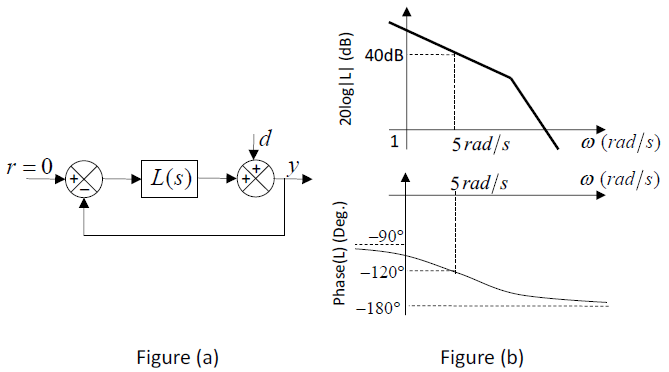 33. A voltage amplifier is constructed using enhancement mode MOSFETs labeled M1, M2, M3 and M4 in the figure below. M1, M2 and M4 are n-channel MOSFETs and M3 is a p-channel MOSFET. All MOSFETs operate in saturation mode and channel length modulation can be ignored. The low frequency, small signal input and output voltages are 𝑣𝑖𝑛 and 𝑣𝑜𝑢𝑡respectively and the dc power supply voltage is VDD . All n-channel MOSFETs have identical transconductance 𝑔𝑚𝑛 while the p-channel MOSFET has transconductance 𝑔𝑚𝑝. The expressions for the low frequency small signal voltage gain 𝑣𝑜𝑢𝑡/𝑣𝑖𝑛 is 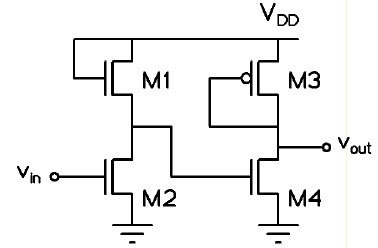 34. In the circuit shown below, assume that the comparators are ideal and all components have zero propagation delay. In one period of the input signal 𝑉𝑖𝑛 = 6 sin(𝜔𝑡), the fraction of the time for which the output OUT is in logic state HIGH is

36. In the circuit below, the light dependent resistor (LDR) receives light from the LED. The LDR has resistances of 5 kΩ and 500Ω under dark and illuminated conditions, respectively. The LED is OFF at time 𝑡 < 0. At time t = 0 s, the switch S1 is closed for 1 ms and then kept open thereafter. Assuming zero propagation delay in the devices, the LED

37. A differential capacitive sensor with a distance between the extreme plates 100 mm is shown in figure below. The difference voltage ∆𝑉 = 𝑉1 − 𝑉2, where 𝑉1 and 𝑉2 are the rms values, for a downward displacement of 10 mm of the intermediate plate from the central position, in volts, is

38. A piezoelectric transducer with sensitivity of 30 mV/kPa is intended to be used in the range of 0 kPa to 100 kPa. The readout circuit has a peak noise amplitude of 0.3 mV and measured signals over the full pressure range are encoded with 10 bits. The smallest pressure that produces a non-zero output, in units of Pa, is approximately

39. A 100 W light source emits uniformly in all directions. A photodetector having a circular active area whose diameter is 2 cm is placed 1 m away from the source, normal to the incident light. If the responsivity of the photodetector is 0.4 A/W, the photo-current generated in the detector, in units of mA, is

40. A resistance-meter has five measurement range-settings between 200Ω and 2 MΩ in multiples of 10. The meter measures resistance of a device by measuring a full-range voltage of 2 V across the device by passing an appropriate constant current for each range-setting. If a device having a resistance value in the range 8 kΩ to 12 kΩ and a maximum power rating of 100 µW is to be measured safely with this meter, the choice for range-setting on the meter for best resolution in measurement, in kΩ, is

42. Four identical resistive strain gauges with gauge factor of 2.0 are used in a Wheatstone bridge as shown in the figure below. Only one of the strain gauges RSENSE changes its resistance due to strain. If the output voltage VOUT is measured to be 1 mV, the magnitude of strain, in units of microstrain, is 43. The frequency response of a digital filter 𝐻(𝜔) has the following characteristics

where ω is the normalized angular frequency in rad/sample. If the analog upper cut off frequency for the passband of the above digital filter is to be 1.2 kHz, then the samplingfrequency should be _______kHz.

45. In the circuit shown below, the angular frequency 𝜔 at which the current is in phase with the voltage is _______ rad/s.

47. The output of a continuous-time system 𝑦(𝑡) is related to its input 𝑥(𝑡) as

50. In the circuit shown below, all transistors are n-channel enhancement mode MOSFETs. They are identical and are biased to operate in saturation mode. Ignoring channel length modulation, the output voltage Vout is _________ V. 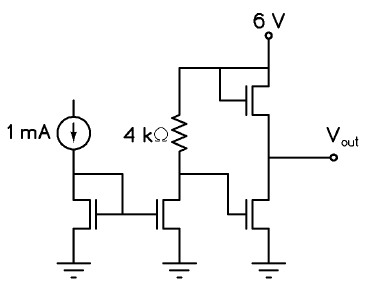 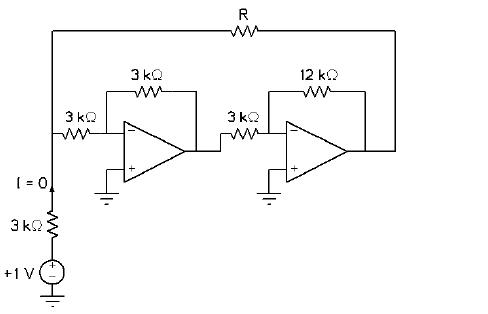 52. The parallel resistance-capacitance bridge shown below has a standard capacitance value of C1=0.1µF and a resistance value of R3=10 kΩ. The bridge is balanced at a supply frequency of 100 Hz for R1=375 kΩ, R3=10 kΩ and R4=14.7 kΩ. The value of the dissipation factor 𝐷 = 1/(𝜔𝑅𝑝𝐶𝑝) of the parallel combination of 𝐶𝑝 and 𝑅𝑝 is_______.(Answer should be rounded off to THREE decimal places). 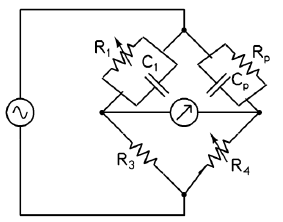 54. A signal x(t) has a bandwidth 2𝐵 about a carrier frequency of fc = 2 GHz as shown in Figure (a) below. In order to demodulate this signal, it is first mixed (multiplied) with a local oscillator of frequency fLO = 1.5 GHz, and then passed through an ideal low-pass filter (LPF) with a cut-off frequency of 2.8 GHz. The output of the LPF is sent to a digitizer ADC with a sampling rate of 1.6 GHz as shown in Figure (b) below. The maximum value of B so that the signal x(t) can be reconstructed from its samples according to the Nyquist sampling theorem is _______ MHz. 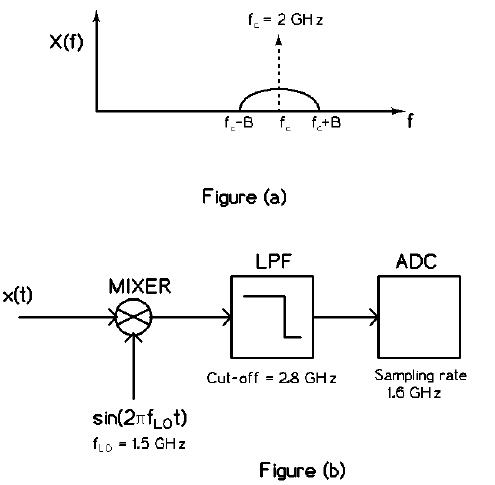 55. Consider a Michelson interferometer as shown in the figure below. When the wavelength of the laser light source is switched from 400 nanometer to 500 nanometer, it is observed that the intensity measured at the output port P goes from a minimum to a maximum. This observation is possible when the smallest path difference between the two arms of the interferometer is ______ nanometer. 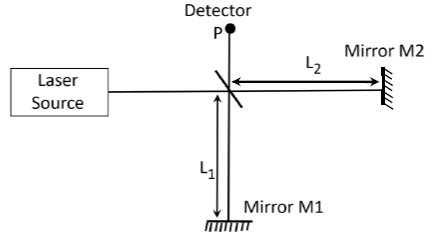