2. Let 𝜆1 and 𝜆2 be the two eigenvalues of the matrix

3. The Laplace transform of the function 𝑓(𝑡) = 𝑒−𝑡 is given by

4. The relative decline rate of oil is given by

where q is the oil production rate, a (> 0) is the decline rate and b is a constant. The equation gives harmonic decline curve when b is

5. Which one of the following provides a vertical stab for the flow lines and annulus access lines from multiple wells in offshore subsea completion?

6. In a faulted reservoir, the principle of superposition for the pressure drop using diffusivity equation is applicable. This is due to

(A) high Reynolds number flow in the well.

(D) linearity of the diffusivity equation.

7. Which one of the following parameters is measured using routine core analysis (RCA)?

9. Which one of the following rocks and reservoir fluids are arranged in the decreasing order of their electrical resistivity? Assume that rocks have equal porosity and are filled with brine.

10. Which one of the following is the correct sequence of events for hydrocarbon generation in the subsurface? 13. Which one of the following flow regimes is more favorable for gas lift operation?

15. Which one of the following offshore platforms DOES NOT use buoyant columns or pontoons?

(B) Jack up platforms

16. In which one of the following offshore platforms, the condition of the sea floor is a vital consideration?

17. The ‘Klinkenberg effect’ is related to

(B) hysteresis effect in relative permeability during drainage and imbibition process.

(D) slippage of gas phase at the sand grain surface.

18. Favourable conditions for formation of gas hydrates are

(A) high temperature and high pressure.

(B) high temperature and low pressure.

19. Match the following quantities with their dimensions:

20. The plot of dissolved gas oil ratio (RS), defined as the “ratio of STP volume of gas dissolved in the oil at pressure P, to the volume of the oil at STP” is given below. 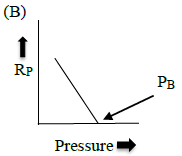 21. Which one of the following denotes a regular four-spot flood pattern? 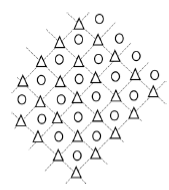 where i, j and k are cartesian unit vectors. If

26. The general solution of the differential equation

is (here C1 and C21 are arbitrary constants)

27. Consider the following system of linear equations (where 𝑝 and 𝑞 are constants)

28. Three reservoirs P, Q and R have identical geometry and rock properties. The plot of the height of the transition zone (h) above the free water level (FWL) against the water saturation (Sw) is given in the figure. Assume 𝜎 cos 𝜃 for all the three fluid combinations remains the same. Which one of the following is the correct match of the reservoir fluids with the reservoir (𝜎 is the interfacial tension between the respective fluid phases and 𝜃 is the contact angle). 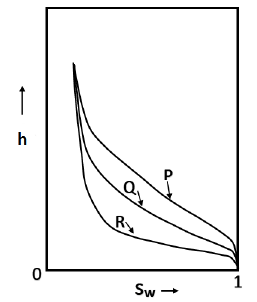 29. The fractional flow (fw) versus water saturation (Sw) curve for an imbibition process (neglecting the capillary forces) in a given core for three different inclinations is shown in the figure. 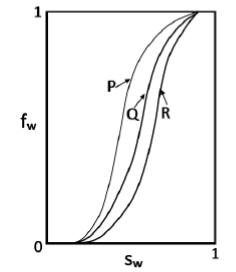 Which one of the following is the correct representation of the fractional flow curves?

32. An exploratory well encountered three reservoir formations S1 (perfectly cemented), S2 (poorly cemented) and S3 (fractured). The Formation Factor (F) is governed by the equation 𝐹 = 𝑎𝜙−𝑚, where ‘𝜙’ is the porosity and ‘m’ is the cementation factor. The constant ‘a’, linked to tortuosity is assumed to be 1 for all the formations. The log-log plot between Formation Factor (F) and porosity (𝜙) is shown. 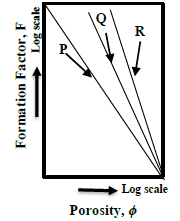 Which one of the following represents the correct match of the formations with their respective plots?

33. Typical parameters obtained in the pyrolysis experiment of the source rock materials are shown in the Figure. Which one of the following is NOT true about pyrolysis in source rock analysis? (B) Peak S2 represents breakdown of kerogen and generation of hydrocarbons.

(C) Peak S3 represents Tmax, the temperature at which most hydrocarbons are generated.

34. A single well encounters multiple clean sands of exactly the same thickness, porosity and permeability. Rw is the formation fluid resistivity and Rmf is the mud filtrate resistivity.

Which one of the following match the relation between Rw and Rmf to that of Self  Potential (SP) log deflection?

35. Which one of the following options is NOT a part of the mudlogs prepared by the drill-site geologist?

(A) Rate of Penetration (ROP)

(B) Chromatograph showing presence of C1 to C5 concentration

(C) Lithology from drill cutting and its interpretation

(D) Reservoir unit delineation based on volume of shale (Vsh)

37. A box contains 2 red and 3 black balls. Three balls are randomly chosen from the box and are placed in a bag. Then the probability that there are 1 red and 2 black balls in the bag, is _______.

Then, according to the trapezoidal rule, the value of the integral

39. Oil is produced at a constant rate from a well in a bounded reservoir. The variation of the bottom-hole pressure with time is shown in the given Table. The magnitude of the slope of the pressure vs time curve that you would use to find the drainage area is ____ psi/day    (round off to 1 decimal place).

40. In a core flood experiment of immiscible and incompressible displacement  of oil  (𝜇𝑜 =  1 cP) with water (𝜇𝑤 = 1 cP), only axial flow is observed. The relative permeability of water is given by 𝑘𝑟𝑤 = 𝑆2w , where 𝑆 is water saturation. The relative permeability of oil is given by 𝑘𝑟𝑜 = (1 − 𝑆𝑤)2. The gravity and capillary pressure are neglected. From the fractional flow and water saturation relationship, the saturation of water at the flood front is______ % (round off to 1 decimal place). 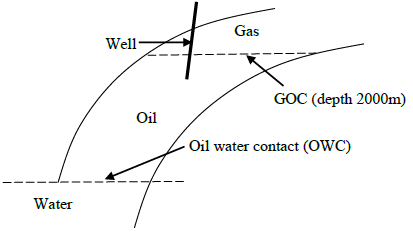 The static oil pressure gradient is 0.08 bar/m in the pay zone. If a constant hydrostatic pressure gradient of 0.1 bar/m prevails throughout the subsurface, then the thickness of the oil column is _____ m (round off to 1 decimal place).

(round off to 1 decimal place). Assume that all volumes are measured at

44. In an oil reservoir, the residual oil saturation in the volume flooded with polymer solution is 20%. The initial water saturation is 20%. The volumetric sweep efficiency is 50%. The maximum possible recovery factor for the reservoir is _______ % (round off to 1 decimal place).

48. A model porous medium of 5 cylindrical capillaries of radii varying from 60 to 100 micrometers (refer Table) is subjected to Mercury Injection Capillary Pressure (MICP) treatment. The capillaries are being filled in an increasing order of their entry pressure. The magnitude of

,where 𝜎 is the interfacial tension and 𝜃 is the contact angle. The minimum applied mercury pressure to achieve 50% mercury saturation in the sample is _______ × 103 dyne/cm2 (round off to 1 decimal place).

49. The sonic log parameters from an exploratory well in a reservoir are as follows: Measured P-wave transit time (∆𝑡𝑙𝑜𝑔) = 85 µs/ft

The hydrocarbon saturation (in percentage) in the reservoir is ______(round off to 1 decimal place).

, where Sw is water saturation, 𝜑 is porosity]

50. A vertical well of 8000 ft is producing below bubble point pressure. Oil and water each is produced at the rate of 500 bbl/day. The indicated bottom hole pressure is 3000 psi. If the same gas to liquid ratio (GLR) is maintained, using the given figure, the new bottom hole pressure at 5000 ft is ______psi. 51. In a drilling rig, the crown block and the traveling block have three and two sheaves, respectively. A single wireline connects the hoisting drum to the deadline anchor as shown in the figure. Neglect the weight of the pulleys and the wireline, and friction between the sheaves and wireline. The ratio of the deadline load to static crown load is ______(round off to 2 decimal places). 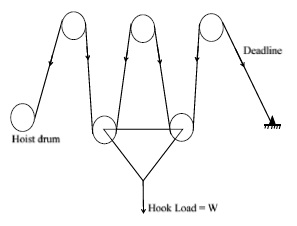 53. In an active water drive during a certain period, the rate of production and reservoir pressure remain constant. The water influx into the reservoir from the aquifer is 6000 bbl/day. The surface oil and water production rates are 3000 STB/day and 1500 STB/day, respectively. The current production gas to oil ratio is 825 SCF/STB, and the formation volume factors at the current pressure for oil, water and gas are 1.375 bbl/STB, 1.04 bbl/STB and 0.007 bbl/STB, respectively. The solution gas to oil ratio at the current pressure is _______SCF/STB (round off to 1 decimal place).

54. In a water flooding experiment, the pressure gradients in the displacing and displaced phases are 400 psi/ft and 350 psi/ft, respectively. Assume that the displacement front is stable in the absence of capillary and gravity forces. Consider that only water flows upstream and only oil flows downstream of the displacement front. Then the mobility ratio for this immiscible displacement process is ______ (round off to 2 decimal places).

55. In a pressure draw-down testing, the well bore flowing pressure (𝑃𝑤𝑓) is given by

The following data is given in the oil field units,