1. A particle of mass m is fixed to one end of a light spring having force constant k and ustreatch length l. The other end is fixed. The system is given an angular speed ω about the fixed end of the spring such that it rotates in a circle in gravity free space. Then the stretch in the spring is

2. Three charged particles A, B and C, with charge −4q, +2q and −2q present on the circumference of a circle of radius d. The charges particles A, C and centre O of the circle formed an equilateral triangle as shown in figure. Electric field at O along x-direction is: 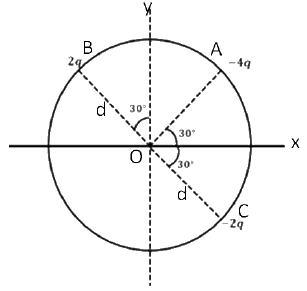 3. A thermodynamic cycle xyzx is shown on a V – T diagram. 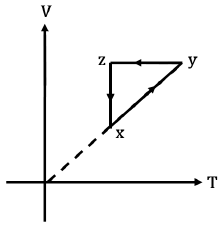 The P-V diagram that best describes this cycle is : (Diagrams are schematic and not upto scale) 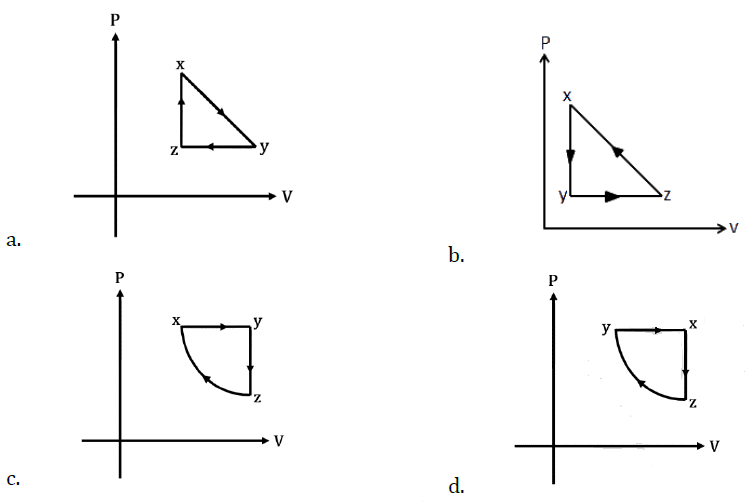 4. Find the co-ordinates of center of mass of the lamina shown in the figure below. 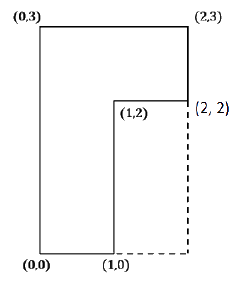 5. The plot that depicts the behavior of the mean free time τ (time between two successive collisions) fot the molecules of an ideal gas, as a function of temperature (T), qualitatively, is: (Graph the schematic and not drawn to scale) 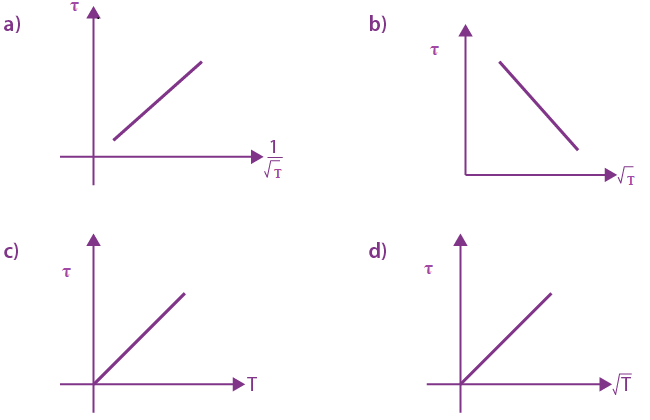 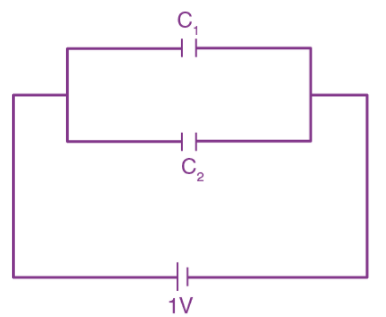 7. Consider a uniform rod of mass 4m and length L pivoted about its centre. A mass m is moving with a velocity ν making angle θ=π/4 to the rod’s long axis collides with one end of the rod and stick to it. The angular speed of the rod-mass system just after collision is

9. The length of a potentiometer wire of length 1200 𝑐𝑚 and it carries a current of 60 mA. For a cell of emf 5 V and internal resistance of 20 Ω, the null point on it is found to be at 1000 cm. The resistance of whole wire is

10. The magnifying power of a telescope with tube length 60 cm is 5. What is the focal length of its eyepiece? 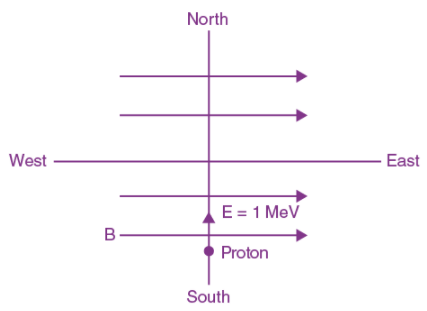 13. If finding the electric field around a surface is given by

is applicable. In the formula Ɛ0 is permittivity of free space, A is area of Gaussian and qenc is charge enclosed by the Gaussian surface. This equation can be used in which of the following equation?

(a)  Only when the Gaussian surface is an equipotential surface.

= constant on the surface.

is constant on the surface

(d) for any choice of Gaussian surfaces.

14. The dimension of stopping potential V0 in photoelectric effect in units of Planck’s constant (h), speed of light (c), and gravitational constant (G) and Ampere (A) is

15. A leak proof cylinder of length 1 m, made of metal which has very low coefficient of expansion is floating in water at 0°C such that its height above the water surface is 20 cm. When the temperature of water is increases to 4°C, the height of the cylinder above the water surface becomes 21 cm. The density of water at T = 4°C relative to the density at T = 0°C is close to

16. The graph which depicts the result of Rutherford gold foil experiment with α- particle is:

(Plots are schematic and not to scale) 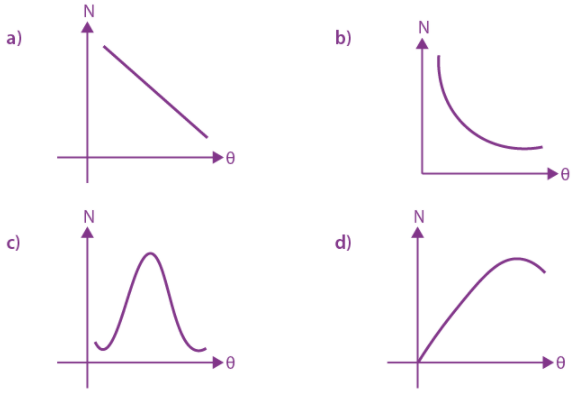 17. At time t = 0 magnetic field of 1000 Gauss is passing perpendicularly through the area defined by the closed loop shown in the figure. If the magnetic field reduces linearly to 500 Gauss, in the next 5 s, then induced EMF in the loop is: 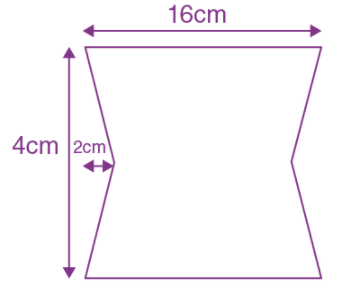 18. Choose the correct Boolean expression for the given circuit diagram:

19. Consider a solid sphere of density

It collides elastically with another body, B of the mass which has an initial velocity of

After collision, A moves with a velocity

The energy of B after collision is written as (x/10) J, the value of x is

24. A one metre long (both ends open) organ pipe is kept in a gas that has double the density of air at STP. Assuming the speed of sound in air at STP is 300 m/s, the frequency difference between the fundamental and second harmonic of this pipe is ____Hz.

25. Four resistors of resistance 15 Ω, 12 Ω, 4Ω and 10Ω respectively in cyclic order to form a wheatstone’s network. The resistance that is to be connected in parallel with the resistance of 10 to balance the network is _______.

2. The predominant intermolecular forces present in ethyl acetate, a liquid, are:

(b)  hydrogen bonding and London dispersion

3. For the Balmer series in the spectrum of H-atom,

The correct statements among (A) to (D) are:

(B) The ionization energy of hydrogen can be calculated from the wave number of these lines.

(C) The lines of longest wavelength corresponds to n2= 3.

(D) As wavelength decreases, the lines of the series converge.

4. The first ionization energy (in kJ/mol) of Na, Mg, Al and Si, respectively,

5. The stoichiometry and solubility product of a salt with the solubility curve given below is, respectively: 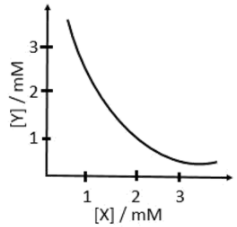 6. The complex that can show fac- and mer-isomers is:

7. A graph of vapour pressure and temperature for three different liquids X, Y and Z is shown below: 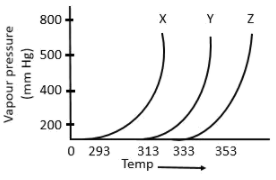 The following inferences are made:

(A) X has higher intermolecular interactions compared to Y

(B) X has lower intermolecular interactions compared to Y

8. As per Hardy-Schulze formulation, the flocculation values of the following for ferric hydroxide sol are in the order:

9. The rate of a certain biochemical reaction at physiological temperature (T) occurs 106 times faster with enzyme than without. The change in activation energy upon adding enzyme is:

11. The third ionization enthalpy is minimum for:

12. The strength of an aqueous NaOH solution is most accurately determined by titrating: (Note: consider that an appropriate indicator is used)

(a)  Aq. NaOH in a pipette and aqueous oxalic acid in a burette

(b)  Aq. NaOH in a volumetric flask and concentrated H2SO4 in a conical flask

(c)  Aq. NaOH in a burette and concentrated H2SO4 in a conical flask

(d) Aq. NaOH in a burette and aqueous oxalic acid in a conical flask

13. The decreasing order of reactivity towards dehydrohalogenation (E1) reaction of the following compounds is:

14. Major product in the following reaction is:

17. The major products A and B in the following reactions are: 18. A flask contains a mixture of isohexane and 3-methylpentane. One of the liquids boils at 63°C while the other boils at 60°C. What is the best way to separate the two liquids and which one will be distilled out first?

19. Which of the given statement is not true for glucose?

(a)  The pentacetate glucose does not react with hydroxylamine to give oxime.

(b)  Glucose reacts with hydroxylamine to form oxime.

20. The reagent used for the given conversion is:

22. What will be the electrode potential for the given half cell reaction at pH= 5?

24. The magnitude of work done by gas that undergoes a reversible expansion along the path ABC shown in figure is 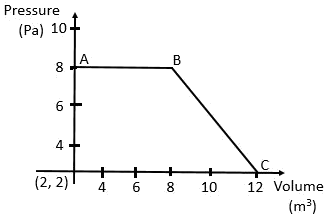 1. For which of the following ordered pairs (μ, δ), the system of linear equations

2. Let y = (x) be a solution of the differential equation,

4. Which of the following is a tautology?

8. The inverse function of

where c is a constant of integration, then λf(π/3) is equal to :

15. If volume of parallelepiped whose coterminous edges are given by

be 1 cu. unit. If θ be the angle between the edges

then cos θ can be:

17. The shortest distance between the lines

19. If c is a point at which Rolle’s theorem holds for the function,

21. An urn contains 5 red marbles, 4 black marbles and 3 white marbles. Then the number of ways in which 4 marbles can be drawn so that at most three of them are red is.

23. The least positive value of ‘a’ for which the equation,