1. A ring is hung on a nail. It can oscillate, without slipping or sliding

(ii) back and forth in a direction perpendicular to its plane, with a period T2.

2. The correct match between the entries in column I and column II are:

3. In an experiment to verify Stokes law, a small spherical ball of radius r and density falls under gravity through a distance h in the air before entering a tank of water. If the terminal velocity of the ball inside water is the same as its velocity just before entering the water surface, then the value of h is proportional to (ignore viscosity of air)

4. Ten charges are placed on the circumference of a circle of radius R with constant angular separation between successive charges. Alternate charges 1, 3, 5, 7, 9 have charge (+q) each, while 2, 4, 6, 8, 10 have charge (–q) each. The potential V and the electric field E at the centre of the circle are respectively: (Take V= 0 at infinity)

5. A spaceship in space sweeps stationary interplanetary dust. As a result, its mass increases at a rate

7. In the circuit, given in the figure currents in different branches and the value of one resistor are shown. Then potential at point B with respect to the point A is:

8. The velocity (v) and time (t) graph of a body in a straight line motion is shown in the figure. The point S is at 4.333 seconds. The total distance covered by the body in 6 s is:

9. An infinitely long straight wire carrying current I, one side opened rectangular loop and a conductor C with a sliding connector are located in the same plane, as shown in the figure. The connector has length l and resistance R. It slides to the right with a velocity v. The resistance of the conductor and the self-inductance of the loop are negligible. The induced current in the loop, as a function of separation r, between the connector and the straight wire is: 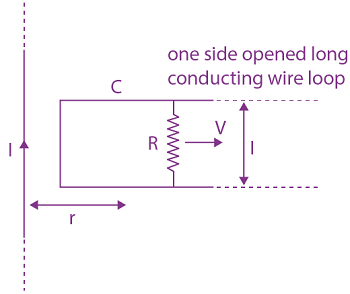 10. Two Zener diodes (A and B) having breakdown voltages of 6 V and 4 V respectively, are connected as shown in the circuit below. The output voltage VO variation with input voltage linearly increasing with time is given by (Vinput = 0 V at t = 0) (figures are qualitative) 11. In an adiabatic process, the density of a diatomic gas becomes 32 times its initial value. The final pressure of the gas is found to be n times the initial pressure. The value of n is:

12. A galvanometer is used in the laboratory for detecting the null point in electrical experiments. If on passing a current of 6 mA it produces a deflection of 2°, its figure of merit is close to:

13. In the circuit shown, charge on the 5μF capacitor is: 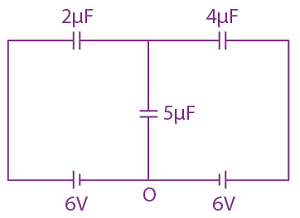 14. A parallel plate capacitor has a plate of length ‘l’, width ‘w’ and separation of plates is ‘d’. It is connected to a battery of emf V. A dielectric slab of the same thickness ‘d’ and of dielectric constant k = 4 is being inserted between the plates of the capacitor. At what length of the slab inside plates, will the energy stored in the capacitor be two times the initial energy stored?

15. A radioactive nucleus decays by two different processes. The half-life for the first process is 10 s and that for the second is 100 s. The effective half-life of the nucleus is close to:

16. A driver in a car, approaching a vertical wall, notices that the frequency of his car horn has changed from 440 Hz to 480 Hz when it gets reflected from the wall. If the speed of sound in air is 345 m/s, then the speed of the car is:

17. An iron rod of volume 10–3m3 and relative permeability 1000 is placed as core in a solenoid with 10 turns/cm. If a current of 0.5 A is passed through the solenoid, then the magnetic moment of the rod will be:

18. Two coherent sources of sound, S1 and S2, produce sound waves of the same wavelength, λ = 1 m, in phase. S1 and S2 are placed 1.5 m apart (see fig). A listener, located at L, directly in front of S2 finds that the intensity is at a minimum when he is 2 m away from S2. The listener moves away from S1, keeping his distance from S2 The adjacent maximum of intensity is observed when the listener is at a distance d from S1. Then, d is : 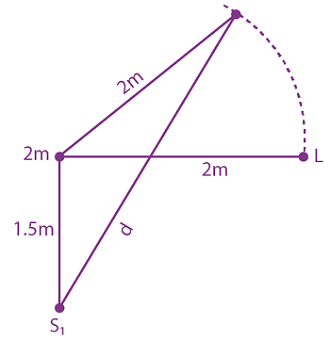 (1)  Only y and z have the same dimension

(3)  Only x and y have the same dimension

(4)  Only x and z have the same dimension

20. The acceleration due to gravity on the earth’s surface at the poles is g and angular velocity of the earth about the axis passing through the pole is ω. An object is weighed at the equator and at a height h above the poles by using a spring balance. If the weights are found to be same, then h is : (h < < R, where R is the radius of the earth)

22. The surface of a metal is illuminated alternately with photons of energies E1 = 4 eV and E2 = 2.5 eV respectively. The ratio of maximum speeds of the photoelectrons emitted in the two cases is 2. The work function of the metal in (eV) is _________.

25. A thin rod of mass 0.9 kg and length 1 m is suspended, at rest, from one end so that it can freely oscillate in the vertical plane. A particle of mass 0.1 kg moving in a straight line with velocity 80 m/s hits the rod at its bottom most point and sticks to it (see figure). The angular speed (in rad/s) of the rod immediately after the collision will be __________. 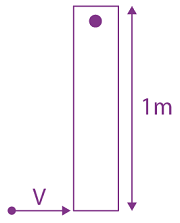 1. The major product formed in the following reaction is:

2. Hydrogen peroxide, in the pure state, is:

3. Boron and silicon of very high purity can be obtained through:

4. The following molecule acts as an:

5. Among the following compounds, geometrical isomerism is exhibited by:

6. Adsorption of a gas follows Freundlich adsorption isotherm. If x is the mass of the gas adsorbed on mass m of the adsorbent, the correct plot of x/m versus p is: 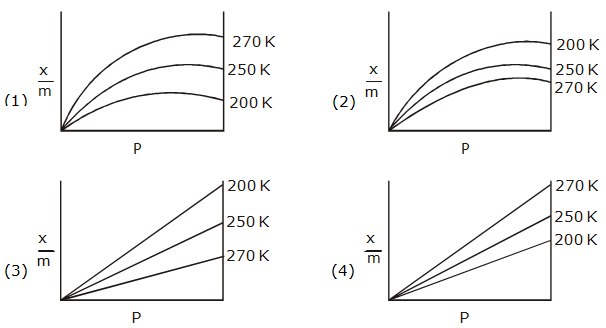 8. The correct statement about probability density (except at infinite distance from nucleus) is :

9. The rate constant (k) of a reaction is measured at different temperatures (T), and the data are plotted in the given figure. The activation energy of the reaction in kJ mol–1 is: (R is gas constant) 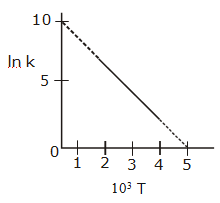 10. The variation of molar conductivity with concentration of an electrolyte (X) in aqueous solution is shown in the given figure. 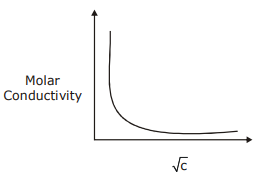 The electrolyte X is:

11. The final major product of the following reaction is: 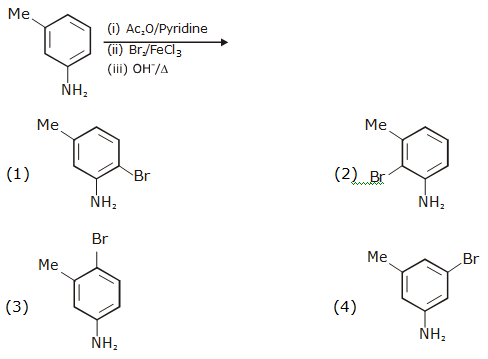 12. The major product of the following reaction is : 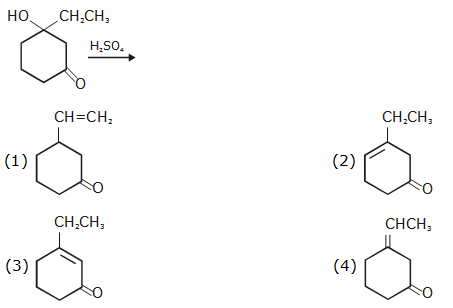 15. Which one of the following polymers is not obtained by condensation polymerisation?

17. An element crystallises in a face-centred cubic (fcc) unit cell with cell edge a. The distance between the centres of two nearest octahedral voids in the crystal lattice is:

19. The increasing order of boiling points of the following compounds is:

20. The one that is NOT suitable for the removal of permanent hardness of water is:

7. If the mean and the standard deviation of the data 3,5,7,a,b are 5 and 2 respectively, then a and b are the roots of the equation:

where C is a constant of integration, then

coplanar, then the line L2 passes through the point:

18. Let y = y(x) be the solution of the differential equation

19. If the system of linear equations

20. Which of the following points lies on the tangent to the curve

If the projection of

is equal to the projection of

25. In a bombing attack, there is 50% chance that a bomb will hit the target. At least two independent hits are required to destroy the target completely. Then the minimum number of bombs, that must be dropped to ensure that there is at least 99% chance of completely destroying the target, is_____