1. A tuning fork A of unknown frequency produces 5 beats/sec with a fork of known frequency 340 Hz. When fork A is filed, the beat frequency decreases to 2 beats/s. What is the frequency of fork A?

3. A cord is wound around the circumference of a wheel of radius r. The axis of the wheel is horizontal and the moment of inertia about it is I. A weight mg is attached to the cord at the end. The weight falls from rest. After falling through a distance ‘h’, the square of the angular velocity of the wheel will be: (there is no slipping between the wheel and the cord)

4. Find the peak current and resonant frequency of the following circuit (as shown in the figure)

5. The incident ray, reflected ray and the outward drawn normal are denoted by the unit vectors

respectively. Then choose the correct relation for these vectors.

6. A radioactive sample is undergoing α decay. At any time t1, its activity is A and at another time t2, the activity is A/5. What is the average lifetime for the sample?

7. A particle executes S.H.M., the graph of velocity as a function of displacement is:

9. Draw the output Y in the given combination of gates. 10. An inclined plane making an angle of 300 with the horizontal is placed in a uniform horizontal electric field

as shown in the figure. A body of mass 1 kg and charge 5 mC is allowed to slide down from rest from a height of 1 m. If the coefficient of friction is 0.2, find the time taken by the body to reach the bottom. 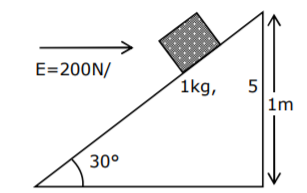 11. If ‘C’ and ‘V’ represent capacitance and voltage respectively then what are the dimensions of λ where C/V = λ?

Reason R: Magnification is achieved as the small object can be kept much closer to the eye than 25 cm and hence it subtends at a large angle.

In light of the above statements, choose the most appropriate answer from the options given below:

14. Two masses A and B, each of mass M are fixed together by a massless spring. A force acts on mass B as shown in the figure. If mass A starts moving away from mass B with acceleration ‘a’, then the acceleration of mass B will be:

15. A wire of 1Ω has a length of 1 m. It is stretched till its length increases by 25%. The percentage change in resistance to the nearest integer is:

Statement (1):- A second’s pendulum has a time period of 1 second.

Statement (2):- It takes precisely one second to move between the two extreme positions.

In light of the above statements, choose the correct answer from the options given below.

17. An aeroplane with its wings, spread 10 m, is flying at a speed of 180 km/h in a horizontal direction. The total intensity of the magnetic field at that part is 2.5 × 10–4 Wb/m2 and the angle of dip is 60°. The emf induced between the tips of the plane wings will be:

(c)  either monoatomic or diatomic

20. Given below are two statements:

In the light of the above statements Choose the correct answer from the option given below:

21. If the highest frequency modulating a carrier is 5 kHz, then the number of AM broadcast stations accommodated in a 90 kHz bandwidth are ___________.

23. A particle executes S.H.M with amplitude ‘a’ and time period T. The displacement of the particle from the mean position when its speed is half of the maximum speed is √xa/2. The value of x is ________

24. Two stream of photons, possessing energies equal to twice and ten times the work function of metal are incident on the metal surface successively. The value of the ratio of maximum velocities of the photoelectrons emitted in the two respective cases is x : 3. The value of x is ________. 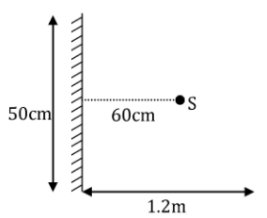 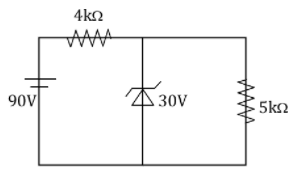 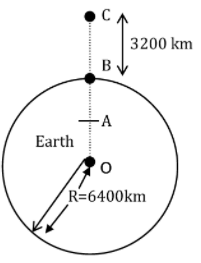 28. 27 similar drops of mercury are maintained at 10 V each. All these spherical drops combine into a single big drop. The potential energy of the bigger drop is _____ times that of a smaller drop.

29. The volume V of a given mass of monatomic gas changes with temperature T according to the relation V = KT2/3. The work done when temperature changes by 90 K will be xR. The value of x is ____. [R = universal gas constant]

30. Time period of a simple pendulum is T. The time taken to complete 5/8 oscillations starting from mean position is

2. Identify A in the following chemical reaction. 3. The nature of charge on resulting colloidal particles when FeCl3 is added to excess of hot water is:

Choose the correct answer from the option given below:

molecule, the hybridization of carbon 1, 2, 3 and 4 respectively are:

7. Which pair of oxides is acidic in nature?

8. Calgon is used for water treatment. Which of the following statements is NOT true about Calgon?

(c)  It is a polymeric compound and is water-soluble.

(d) It does not remove Ca2+ ion by precipitation.

9. Ceric ammonium nitrate and CHCl3/alc. KOH are used for the identification of functional groups present in _________and________ respectively.

Assertion A: In TlI3, isomorphous to CsI3, the metal is present in +1 oxidation

In the light of the above statements, choose the most appropriate Answer from the options given below:

(b)  A is not correct but R is correct

(d) A is correct but R is not correct

12. Identify A in the given chemical reaction.

14. Identify A in the given reaction.

Choose the correct answer from the option given below

17. Which of the following forms of hydrogen emits low energy b- particles?

18. Choose the correct order of the basic nature of the below given amines.

19. Considering the given reaction, the major product among the following is: 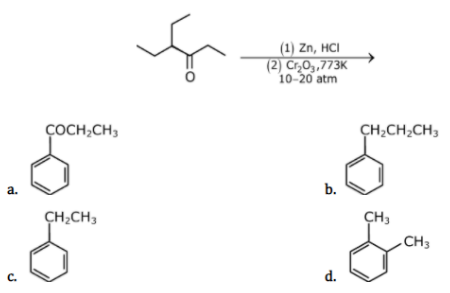 (Rounded off to the nearest integer)

2. The sum of the series

(b)  a straight line

6. Let the slope of the tangent line to a curve at any point P (x, y) be given by

(d) Both F1 and F2 are not tautologies

10. Consider the following system of equations:

Where a, b and c are real constants. Then the system of equations:

(d) has a unique solution for all a, b and c

vectors are collinear, then a possible unit vector parallel to the vector

Then the number of possible functions g : A → A such that gof = f is:

then the domain of the function fog is:

be a differentiable function for all x ∈ then f(x) equals.

20. The triangle of the maximum area that can be inscribed in a given circle of radius ‘r’ is:

(a)  A right-angle triangle having two of its sides of length 2r and r.

(b)  An equilateral triangle of height 2r/3.

(c)  isosceles triangle with base equal to 2r.

(d) An equilateral triangle having each of its side of length √3r.