1. Two identical blocks A and B each of mass m resting on the smooth horizontal floor are connected by a light spring of natural length L and spring constant K. A third block C of mass m moving with a speed v along the line joining A and B collides elastically with A. The maximum compression in the spring is

2. A solid sphere of mass 2 kg radius 0.5m is rolling with an initial speed of 1 ms−1 goes up an inclined plane which makes an angle of 300 with the horizontal plane, without slipping. How long will the sphere take to return to the starting point A?

3. If one mole of a polyatomic gas has two vibrational modes and β is the ratio of molar specific heats for polyatomic gas β=Cp/ Cv then the value of β is :

4. Two cells of emf 2E and E with internal resistance r1 and r2 respectively are connected in series to an external resistor R (see figure). The value of R, at which the potential difference across the terminals of the first cell becomes zero is 5. A sound wave of frequency 245 Hz travels with a speed of 300 ms−1 along the positive x-axis. Each point of the medium moves to and fro through a total distance of 6 cm. What will be the mathematical expression of the travelling wave?

7. Two particles A and B of equal masses are suspended from two massless springs of spring constants K1 and K2 If the maximum velocities during oscillations are equal, the ratio of the amplitude of A and B is :

11. A block of mass 1 kg attached to a spring is made to oscillate with an initial amplitude of 12 cm. After 2 minutes the amplitude decreases to 6 cm. Determine the value of the damping constant for this motion. (take ln 2 = 0.693).

12. An object is located 2 km beneath the surface of the water. If the fractional compression ∆V/V is 1.36%, the ratio of hydraulic stress to the corresponding hydraulic strain will be ……..

13. Two identical photocathodes receive the light of frequencies f1 and f2 If the velocities of the photo-electrons coming out are v1 and v2 respectively, then

14. The atomic hydrogen emits a line spectrum consisting of various series. Which series of hydrogen atomic spectra lie in the visible region?

15. Which one of the following will be the output of the given circuit?

16. The four arms of a Wheatstone bridge have resistances as shown in the figure. A galvanometer of 15 resistance is connected across BD. Calculate the current through the galvanometer when a potential difference of 10 V is maintained across AC. 17. Which one is the correct option depicting the two different thermodynamic processes? 18. A hairpin-like shape as shown in the figure is made by bending a long current-carrying wire. What is the magnitude of a magnetic field at point P which lies on the centre of the semicircle?

19. A rubber ball is released from a height of 5 m above the floor. It bounces back repeatedly, always rising to (81/100) of the height through which it falls. Find the average speed of the ball. (Take g=10 ms−2)

20. What happens to the inductive reactance and the current in a purely inductive circuit if the frequency is halved?

(a)  Both, including reactance and current, will be doubled

(b)  Both, inductive reactance and current will be halved

(c)  Inductive reactance will be halved and current will be doubled

(d) Inductive reactance will be doubled and current will be halved

23. A 2μF capacitor C1 is first charged to a potential difference of 10V using a battery. Then the battery is removed and the capacitor is connected to an uncharged capacitor C2 of 8 μF. The charge in C2 on equilibrium condition is ________ μC. (Round off to the Nearest Integer) 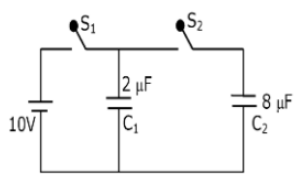 24. A particle of mass m moves in a circular orbit in a central potential field U(r) =U0r4. If Bohr’s quantization conditions are applied, radii of possible orbital rn vary with n1/α, where α is _____

25. The electric field in a region is given by

26. A body of mass 1 kg rests on a horizontal floor with which it has a coefficient of static friction 1/√3. It is desired to make the body move by applying the minimum possible force F N. The value of F will be __________. (Round off to the Nearest Integer)

28. The disc of mass M with uniform surface mass density σ is shown in the figure. The centre of mass of the quarter disc (the shaded area) is at the position

29. Suppose you have taken a dilute solution of oleic acid in such a way that its concentration becomes 0.01 cm3 of oleic acid per cm3 of the solution. Then you make a thin film of this solution (monomolecular thickness) of area 4 cm2 by considering 100 spherical drops of radius

30. A boy of mass 4 kg is standing on a piece of wood having mass 5 kg. If the coefficient of friction between the wood and the floor is 0.5, the maximum force that the boy can exert on the rope so that the piece of wood does not move from its place is ________N. (Round off to the Nearest Integer) 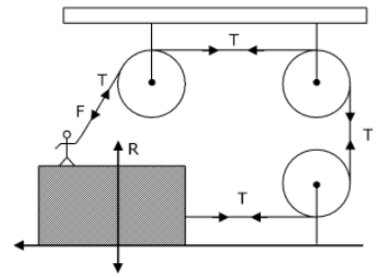 2. In the below reactions, enzyme A and enzyme B respectively are:

(a)  Invertase and Amylase

(b)  Amylase and Invertase

3. The correct pair(s) of the ambident nucleophiles is (are):

4. During which of the following processes, does entropy decrease?

(E) Dissolution of NaCI in water

6. The common positive oxidation states for an element with atomic number 24, are

7. The set of elements that differ in a mutual relationship from those of the other sets is:

8. Given below are two statements:

Statement II: n-alkanes can be easily oxidized to corresponding alcohols with KMnO4.

(b)  Statement I is correct but statement II is incorrect

(d) Statement I is incorrect but statement II is correct

9. Amongst the following, the linear species is:

10. For the coagulation of a negative sol, the species below, that has the highest flocculating power is:

11. The functional groups that are responsible for the ion-exchange property of cation and anion exchange resins, respectively, are:

12. Choose the correct statement regarding the formation of carbocations A and B given.

13. In the below reaction, the structural formula of (A), “X” and “Y” respectively are: 14. Fructose is an example of:

15. Which of the following statement(s) is (are) the incorrect reason for eutrophication?

(A) excess usage of fertilisers

(B) excess usage of detergents

16. Primary, secondary and tertiary amines can be separated using:

(b)  Chloroform and KOH

18. The set that represents the pair of neutral oxides of nitrogen is:

19. Nitrogen can be estimated by Kjeldahl’s method for which of the following compound? 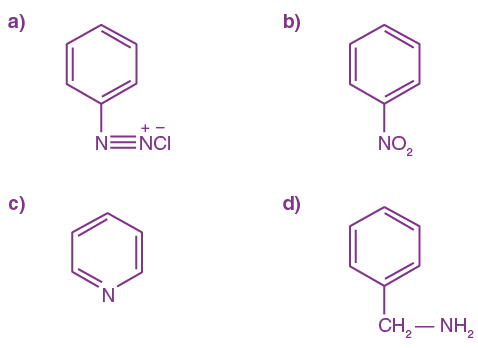 20. One of the by-products formed during the recovery of NH3 from Solvay process is:

24. On complete reaction of FeCl3 with oxalic acid in an aqueous solution containing KOH, resulted in the formation of product A. The secondary valency of Fe in the product A is …………..(Round off to the Nearest Integer)

27. A 1 molal K4Fe(CN)6 solution has a degree of dissociation of 0.4. Its boiling point is equal to that of another solution which contains 18.1 weight per cent of a nonelectrolyte solute A. The molar mass of A is …………… g/mol. (Round off to the Nearest Integer).

[Assume chlorine is an ideal gas at STP

2. Let the tangent to the circle x2 + y2 = 25 at the point R (3, 4) meet the x-axis and y-axis at points P and Q, respectively. If r is the radius of the circle passing through the origin O and having a centre at the incentre of the triangle OPQ, then r2 is equal to:

5. If the equation of the plane passing through the mirror image of a point (2, 3, 1) with respect to line

and containing the line

then the value of b is equal to:

lies in the interval

10. If x, y, z are in arithmetic progression with common difference d, x ≠ 3d, and the determinant of the matrix

where ɑ, β, γ are integers and [x] denotes the greatest integer less than or equal to x, then the value of ɑ + β + γ is equal to:

(a)  has infinitely many elements

(b)  has exactly two elements

(d) is a singleton

16. If the sides AB, BC, and CA of a triangle ABC have, 3, 5 and 6 interior points respectively, then the total number of triangles that can be constructed using these points as vertices is equal to:

where r is a non-zero real number and [r] denotes the greatest integer less than or equal to r, is equal to:

If the centre of the circle is denoted by C and these tangents touch the circle at points A and B, then the ratio of the areas of △PAB and △CAB is :

20. The number of solutions of the equation

and [x] denotes the greatest integer less than or equal to x, is:

21. Let the coefficients of third, fourth and fifth terms in the expansion of

be a vector in the plane containing vectors

and its projection on

are in arithmetic progression for a real number x, then the value of the determinant

be the slopes of three-line segment OA, OB and OC, respectively, where O is the origin. If the circumcentre of ∆ABC coincides with the origin and its orthocentre lies on the y-axis, then the value of