Note : This paper contains fifty (50) objective type questions of two (2) marks each. All questions are compulsory.

1. Name the scientist who said that Information Science is cluster of many disciplines where in the central core is ‘Information’.

2. Which committee recommended that imperial library be designated as copyright library ?

3. Who was the first Librarian of Imperial Library, Calcutta ?

4. Who coined the phrase ‘Information Retrieval’ ?

5. In colon classification which indicator has been used for indicating interpolation ?

(A) Is dividing classes to decrease the extension.

(B) Is dividing classes to increase the extension.

(C) Is dividing classes to increase intension and decrease extension.

7. The International Body that coordinates the assignment of unique domain names, protocol address is

8. Name the Indian Librarian who was honoured with the title of “Khan Bahadur” in 1935 by the British Government.

9. Which approach of information is not given by Wersig and Neveling ?

10. Which of the following citation style manuals are from the same publisher ?

12. An indispensable function of Thesaurus is to

(ii) Grouping the words together according to similarity of meaning

(iii) Representation of Relationship between concepts

13. Which of the following are the basic components of expert system ?

14. Which of the following are the types factors studies under ANOVA ?

15. Which of the following are the models of communication ?

16. Which of the following are criteria for Web evaluation ?

17. Which of the following countries do not have a code of Ethics for library profession ?

18. Which of the following are the components of Search Engine ?

19. When the permission of copyright owner is not needed ?

(i) Criticism or review

20. Which of the following are Library net works ?

21. Arrange the following University Libraries according to the year of their establishment :

22. What is the correct sequence of the following sections of the main entry as per classified catalogue code (CCC) ?

23. Arrange the following indexing sources according to the year of their first publication :

24. Arrange the following library associations according to their year of emergence : 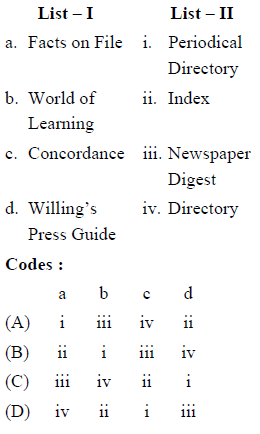 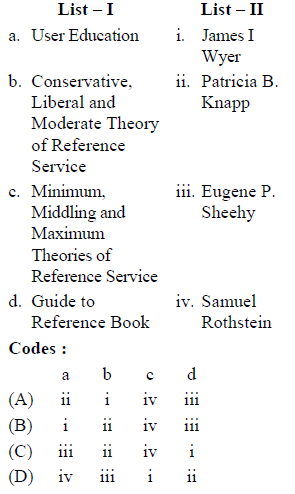 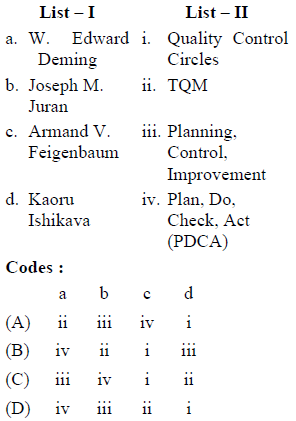 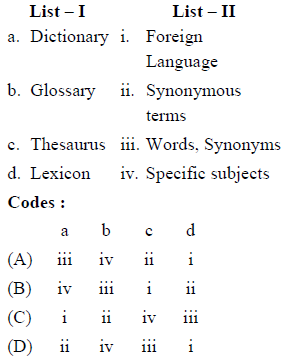 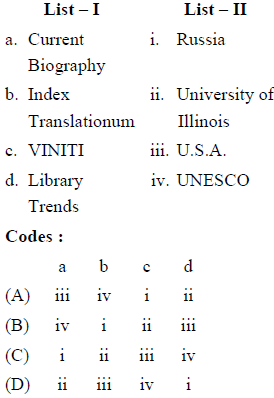 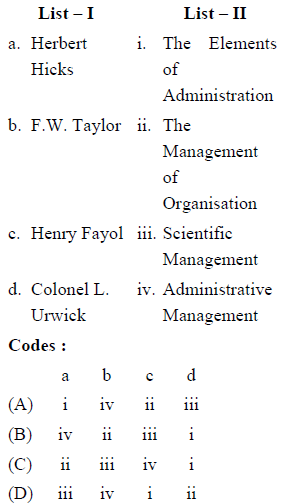 36. Assertion (A) : In the study of History, as an academic discipline, a primary source is an artefact, a document, a recording
or other source of information that was created during the event or immediately after the event.

Reason (R) : Primary sources are considered as original material or evidences about the topic and are fundamental to history.

37. Assertion (A) : Indian National Bibliography is the most comprehensive source of Indian publications.

Reason (R) : National Library of Kolkata is entitled to receive one copy of each Indian publication under Delivery of Book Act.

38. Assertion (A) : As per the generally accepted principles of construction of statistical tabulation, every table should have a clear, concise and adequate title so as to make the table intelligible without reference to the text and this title should always be placed just below the body of the table.

Reason (R) : A statistical table which reflects its title just above the table and supply information about several interrelated
characteristics of data makes the table unwield and inconvenient.

39. Assertion (A) : Knowledge Management involves a number of assets and value added to them.

40. Assertion (A) : According to Horton and Merchant, information is a commodity like other resources.

41. Assertion (A) : Reference section in a Library became insignificant.

42. Assertion (A) : Newspaper Digests are the best sources of information to get current and authentic information like books.

Reason (R) : These sources are compiled by going through various newspapers.

43. Assertion (A) : Encyclopaedias have been regarded as the substitute of all categories of reference sources as these provide all types of information.

Reason (R) : Encyclopaedias provide comprehensive information on all aspects which otherwise are scattered in different categories of reference sources.

44. Assertion (A) : Chi-square is an important non-parametric test which does not require rigid assumptions in respect of the
type of population being studied.

Reason (R) : Since χ2 is a nonparametric test, it requires only the degrees of freedom (implicitly, the size of the population) for using the test.

45. Assertion (A) : Information is commodity.

Read the passage given below and answer the questions based on your understanding of the passage (Question Nos. 46-50) :

According to Wikipedia ‘social media’ is media designed to be disseminated through social interaction, created using highly accessible and scalable publishing techniques. According to search engine partner, the term social media describes media that is posed by the user and can take many different forms. Some type of social media are forums, message boards, blogs, wikis and podcarts. Social media applications include Google, Facebook and You tube. In social media, communication takes place through messages, status updates, voice chats etc. or through photos/videos sharing, games, virtual goods etc. Antony Mayfield in his e-book titled ‘What is Social Media’ ? has defined social media as online media, which encourages contributions and
feedback from everyone who is interested, is open to feedback and participation, is a two way conversation, allows communities
to form quickly and communicate effectively to share common interests and thrive on their connectedness.

The growth of social media is phenomenal. It is being used by all netizens all over the world to a great extent in all areas including business, government, fashion etc. A research conducted by the Institute for Prospective Technological Studies (IPTS) indicates that high take up of social media application outside formal educational settings provides new opportunities for innovation and modernisation.

With this growing trend, political leaders have also realized its importance as an effective tool to spread awareness and to reach out their voters. Democratic presidential candidate Barack Obama used it during the Presidential elections. Since then, social media is being highly used by a number of politicians all over the world. Myspace has more than 7400 discussion groups related to politics. According to a survey by manpower, 29% of the companies in America and 20% of companies worldwide have a social media policy.

People even update themselves through micro-blogging on every aspect of human life including the natural and human diasters. In China, Twitter became the first media in the world to break the news of the Wenzhou earthquake. Social media is being used in fashion industry as well to generate interest in a brand through publicity across online communities and
websites.

India is one of the most culturally, linguistically and genetically diverse regions having more than one billion people. It is ranked third in Asia in terms of the internet users and quite a number of them are using social media. In fact, approximately 60 millions to 65 millions netizens in India open most of their time on social media/networking sites.

46. Who defined social media as ‘online media’ which encourages contributions and feedback from everyone who is interested ?

47. Who used the social media for conversing during recent Presidential Election in U.S.A. ?

48. In China, which social media became the first media to break the news of earthquake ?

49. In Asia, which country is ranked third in terms of using social media by the people ?

50. Which social website has more than 7400 discussion groups relate to politics ?