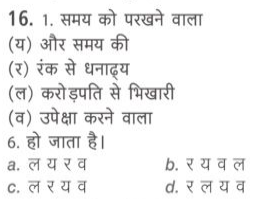 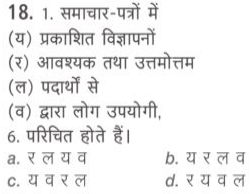 41. Given below is a series of letters which follows some definite order. Determined this order and choose the next two letters for the series out of the responses.

42. Which number is wrong in the given series ?

Directions (Q. Nos. 44-46) A word has been given followed by four other word, one of which cannot be formed by using the letters of the given word. Find out the word from the four  options.

Directions (Q. Nos. 47-48) If ‘−’ stands for multiplication, ‘+’ stands for division, ‘∙’ stands for subtraction and ‘÷’ stands for addition, then find out the correct equation.

49. Hanif wishes to locate his friend Joseph whose house is situated 20 km eastward from his house. Hanif starts his journey travelling 5 km northward, turns rightward to travel 11 km. Again, he takes a right turn to travel 9 km. Then, he takes a left turn and again travels for 9 km. At this point, he finds it difficult to locate Joseph and makes a halt. How much distance should Hanif travel and in which direction to be able to locate Joseph’s house ?

53. The difference between the ages of two brothers is the same as that of their father and mother. The elder brother is 15 years of age. At the time of the birth of younger brother, their mother’s age was 37. If the father is older than mother by 5 years, then what was his age at the time of the elder son’s birth ?

54. The height of mango tree and coconut tree is the same. Banana tree is shorter than palm. Guava tree is smaller than banana but bigger than mango. Which is the tallest tree ?

58. Identify the pair which is different.

59. If in a code DECEMBER is written as ERMBCEDE, then how can NOVEMBER be written in that code ?

60. A boy was asked to multiply a number by 7/8. He multiplied the number by 17/18 and got the result 30 more than the correct answer. The number was

61. Who among the following is considered the Father of the Leap Year ?

62. ‘Glacier Express’ is a popular train of which of the following countries ?

63. ‘Binsar Forest’ is located in which Indian State/Union Territory ?

65. Which of the following is considered to be the best specimen of the Mauryan Art ?

66. Who among the following has composed the National Anthem of Nepal ?

67. Who said, “Political democracy means a way of life which recognizes liberty, equality and fraternity as the principle of life” ?

68. ‘Insanity’ is explained in the Indian Penal Code under

69. Who is the Chairperson of the Economic Intelligence Council (EIC) ?

(a)   The Finance Minister

(b)   The Prime Minister

70. In English Society, murder was not a crime till

72. Who said, “Human greed is a potential cause of crime”?

73. Taj Mahal is threatened due to the effect of

74. Which of the following was not a part of the Ashokan empire ?

75. Who was the first Muslim to preside over the Session of the Indian National Congress ?

76. The sum of the Member of Parliament Fund at present is

77. Who wrote the famous book, Daughter of the East ?

78. Where in India was the first medical college started ?

79. The highest suicide rate in India is in the State of

80. Who among the following has been named ‘BCCI Cricketer’ of the year 2015?