1. Rescue team deployed _____ disaster hit areas combat _____ a lot of difficulties to save the people.

2. Select the most appropriate word that can replace the underlined word without changing the meaning of the sentence:

Now-a-days, most children have a tendency to belittle the legitimate concerns of their parents.

4. After the inauguration of the new building, the Head of the Department (HoD) collated faculty preferences for office space. P wanted a room adjacent to the lab. Q wanted to be close to the lift. R wanted a view of the playground and S wanted a corner office.

Assuming that everyone was satisfied, which among the following shows a possible allocation?

6. Nominal interest rate is defined as the amount paid by the borrower to the lender for using the borrowed amount for a specific period of time. Real interest rate calculated on the basis of actual value (inflation-adjusted), is approximately equal to the difference between nominal rate and expected rate of inflation in the economy.

Which of the following assertions is best supported by the above information?

(A)  Under high inflation, real interest rate is low and borrowers get benefited.

(B)  Under low inflation, real interest rate is high and borrowers get benefited.

(C)  Under high inflation, real interest rate is low and lenders get benefited.

(D)  Under low inflation, real interest rate is low and borrowers get benefited.

(A)  linear and homogeneous

(B)  linear and nonhomogeneous

is estimated numerically using three alternative methods namely the rectangular, trapezoidal and Simpson’s rules with a common step size. In this context, which one of the following statements is TRUE?

(A)  Simpson’s rule as well as rectangular rule of estimation will give NON-zero error.

(B)  Simpson’s rule, rectangular rule as well as trapezoidal rule of estimation will give NON-zero error.

(C)  Only the rectangular rule of estimation will give zero error.

(D)  Only Simpson’s rule of estimation will give zero error.

4. The following partial differential equation is defined for u: u (x, y)

The set of auxiliary conditions necessary to solve the equation uniquely, is

6. The state of stress represented by Mohr’s circle shown in the figure is 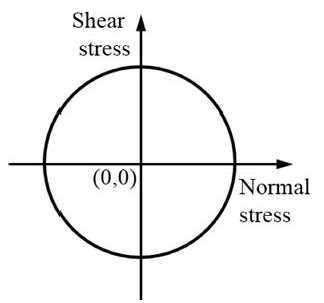 (B)  biaxial tension of equal magnitude

7. A weightless cantilever beam of span L is loaded as shown in the figure. For the entire span of the beam, the material properties are identical and the cross section is rectangular with constant width.

From the flexure-critical perspective, the most economical longitudinal profile of the beam to carry the given loads amongst the options given below, is

9. The traffic starts discharging from an approach at an intersection with the signal turning green. The constant headway considered from the fourth or fifth headway position is referred to as

10. Soil deposit formed due to transportation by wind is termed as

11. A sample of 500 g dry sand, when poured into a 2 litre capacity cylinder which is partially filled with water, displaces 188 cm3 of water. The density of water is 1 g/cm3. The specific gravity of the sand is

12. Muskingum method is used in

(A)  natural stream water flows with free surface below a canal

(B)  natural stream water flows under pressure below a canal

(D)  canal water flows under pressure below a natural stream

14. A triangular direct runoff hydrograph due to a storm has a time base of 90 hours. The peak flow of 60 m3/s occurs at 20 hours from the start of the storm. The area of catchment is 300 km2. The rainfall excess of the storm (in cm), is

16. The relationship between oxygen consumption and equivalent biodegradable organic removal (i.e., BOD) in a closed container with respect to time is shown in the figure 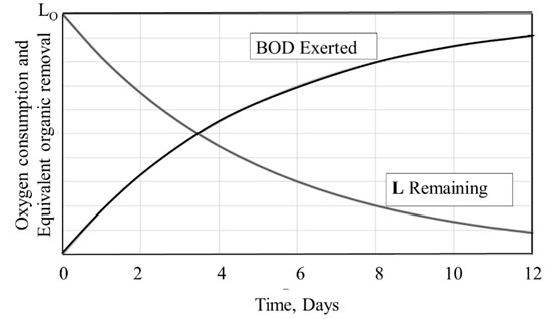 In the above context, the correct expression is

17. A gas contains two types of suspended particles having average sizes of 2 μm and 50 μ Amongst the options given below, the most suitable pollution control strategy for removal of these particles is

23. A one-dimensional consolidation test is carried out on a standard 19 mm thick clay sample. The oedometer’s deflection gauge indicates a reading of 2.1 mm, just before removal of the load, without allowing any swelling. The void ratio is 0.62 at this stage. The initial void ratio (round of to two decimal places) of the standard specimen is________.

24. Velocity distribution in a boundary layer is given by

where u is the velocity at vertical coordinate y, U∞ is the free stream velocity and δ is the boundary layer thickness. The values of U∞ and δ are 0.3 m/s and 1.0 m, respectively. The velocity gradient

25. Two identically sized primary settling tanks receive water for Type-I settling (discrete particles in dilute suspension) under laminar flow conditions. The Surface Overflow Rate (SOR) maintained in the two tanks are 30 m3/m2.d and 15 m3/m2.d. The lowest diameters of the particles, which shall be settled out completely under SORs of 30 m3/m2.d. and 15 m3/m2.d are designated as d30 and d­15, respectively. The ratio d30/d15 (round off two decimal places), is_________.

26. An ordinary differential equation is given below

The eigenvalues of [P] are 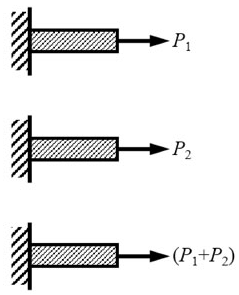 If U is the strain energy stored in the same bar when subjected to an axial tensile force (P1 + P2), the correct relationship is

29. The planar structure RST shown in the figure is roller-supported at S and pin-supported at R. Members RS and ST have uniform flexural rigidity (EI) and S is a rigid joint. Consider only bending deformation and neglect effects of self-weight and axial stiffening. 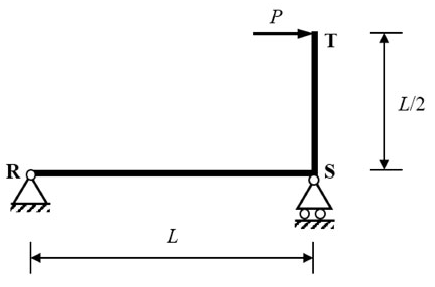 When the structure is subjected to a concentrated horizontal load P at the end, T, the magnitude of rotation at the support R, is

30. Joints, I, J, K, L, Q and M of the frame shown in the figure (not down to the scale are pins. Continuous members IQ and LJ are connected through a pin at N. Continuous members JM and KQ are connected through a pin at P. the frame has hinge supports at joints R and S. The loads acting at joints I, J and K are along the negative Y direction and the loads acting at joints L and M are along the positive X direction.

The magnitude of the horizontal component of reaction (in kN) at S, is

31. The flow-density relationship of traffic on a highway is shown in the figure

32. Group-I gives a list of test methods for evaluating properties of aggregates. Group-II gives the list of properties to be evaluated.

34. Permeability tests were carried out on the samples collected from two different layers as shown in the figure (not drawn to the scale). The relevant horizontal (kh) and vertical (kv) coefficients of permeability are indicated for each layer.

The ratio of the equivalent horizontal to vertical coefficients of permeability, is

The factor of safety of the slope against slip failure, is

36. Crops are grown in a field having soil, which has field capacity of 30% and permanent wilting point of 13%. The effective depth of root zone is 80 cm. Irrigation water is supplied when the average soil moisture drops to 20%. Consider density of the soil as 1500 kg/m3 and density of water as 1000 kg/m3. If the daily consumptive use of water for the crops is 2 mm, the frequency of irrigating the crops (in days), is

38. A theodolite was set up at a station P. The angle of depression to a vane 2 m above the foot of a staff held at another station Q was 45°. The horizontal distance between stations P and Q is 20 m. The staff reading at a benchmark S or RL 433.050 m is 2.905 m. Neglecting the errors due to curvature and refraction, the RL o the station Q (in m), is

41. A concrete beam of span 15 m, 150 mm wide and 350 mm deep is prestressed with a parabolic cable as shown in the figure (not drawn to the scale). Coefficient of friction for the cable is 0.35, and coefficient of wave effect is 0.0015 per meter.

If the cable is tensioned from one end only, the percentage loss (round off to one decimal place) in the cable force due to friction, is _______.

42. The plane truss has hinge supports at P and W and is subjected to the horizontal forces as shown in the figure (not drawn to the scale)

Representing the tensile force with ‘+’ sign and the compressive force with ‘−’ sign, the fore in member XW (in kN, round off to the nearest integer), is ________.

43. The cross-section of the reinforced concrete beam having an effective depth of 500 mm is shown in the figure (not drawn to the scale). The grades of concrete and steel used are M35 and Fe550, respectively. The area of tension reinforcement is 400 mm2. It is given that corresponding to 0.2% proof stress, the material safety factor is 1.15 and the yield strain of Fe550 steel is 0.0044. 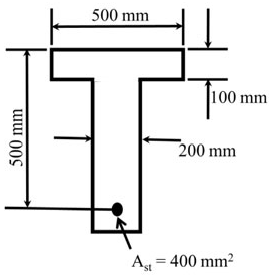 As per IS 456:2000, the limiting depth (in mm, round off to the nearest integer) of the neutral axis measured from the extreme compression fiber, is_______.

44. Two steel plates are lap jointed in a workshop using 6 mm thick fillet weld as shown in the figure (not drawn to the scale). The ultimate strength of the weld is 410 MPa.

45. The design speed of a two-plane two-way road is 60 km/h and the longitudinal coefficient of friction is 0.36. The reaction time of a driver is 2.5 seconds. Consider acceleration due to gravity as 9.8 m/s2. The intermediate sight distance (in m, round off to the nearest integer) required for the road is _______.

46. A footing of size 2 m × 2 m transferring a pressure of 200 kN/m2, is placed at a depth of 1.5 m below the ground as shown in the figure (not drawn to the scale). The clay stratum is normally consolidated. The clay has specific gravity of 2.65 and compression index of 0.3.

Considering 2:1 (vertical to  horizontal) method of load distribution and γw = 10 kN/m3, the primary consolidation settlement (in mm, round off to two decimal places) of the clay stratum is _______.

47. A constant-head permeability test was conducted on a soil specimen under a hydraulic gradient of 2.5. The soil specimen has specific gravity of 2.65 and saturated water content of 20%. If the coefficient of permeability of the soil is 0.1 cm/s, the seepage velocity (in cm/s, round off to two decimal places) through the soil specimen is ______.

48. A 5 m high vertical wall has a saturated clay backfill. The saturated unit weight and cohesion of clay are 18 kN/m3 and 20 kPa, respectively. The angle of internal friction of clay is zero. In order to prevent development of tension zone, the height of the wall is required to be increased. Dry sand is used as backfill above the clay for the increased portion of the wall. The unit weight and angle of internal friction of sand are 16 kN/m3 and 30°, respectively. Assume that the back of the wall is smooth and top of the backfill is horizontal. To prevent the development of tension zone, the minimum height (in m, round off to one decimal place) by which the wall has to be raised, is _______.

51. A concrete dam holds 10 m of static water as shown in the figure (not drawn to the scale). The uplift is assumed to vary linearly from full hydrostatic head at the heel, to zero at the toe of dam. The coefficient of friction between the dam and foundation soil is 0.45. Specific weights of concrete and water are 24 kN/m3 and 9.81 kN/m3, respectively. 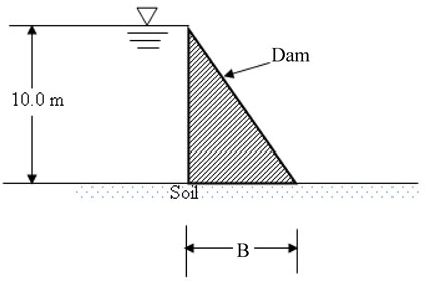 For NO sliding condition, the required minimum base width B (in m, round off to two decimal places) is ________.

The stoichiometric (theoretical) amount of air (in tones/d, round off to the nearest integer) required for complete burning of this waste, is________.

55. A theodolite is set up at station A. The RL of instrument axis is 212.250 m. The angle of elevation to the top of a 4 m long staff, held vertical at station B, is 7°. The horizontal distance between stations A and B is 400 m. Neglecting the errors due to curvature of earth and refraction, the RL (in m, round off to three decimal places) of station B is_________.