1. Raman is confident of speaking English ______ six months as he has been practicing regularly ________ the last three weeks.

2. His knowledge of the subject was excellent but his classroom performance was _______.

4. The drawn of the 21st century witnessed the melting glaciers oscillating between giving too much and too little to billions of people who depend on them for fresh water. The UN climate report estimates that without deep cuts to man-made emissions, at least 30% of the northern hemisphere’s surface permafrost could melt by the end of the century. Given this situation of imminent global exodus of billions of people displaced by rising seas, nation-states need to rethink their carbon footprint for political concerns, if not for environmental ones.

(A)  Nation-states do not have environmental concerns.

(B)  Nation-states are responsible for providing fresh water to billions of people.

(C)  Billions of people are responsible of man-made emissions.

(D)  Billions of people are affected by melting glaciers.

5. There are multiple routes to reach from node 1 to node 2, as shown in the network. 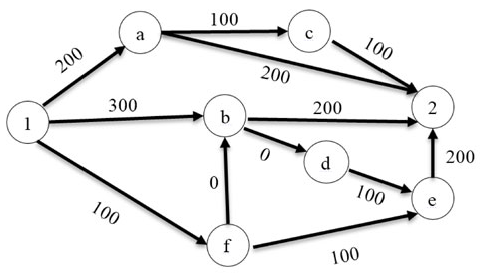 6. Goods and Services Tax (GST) is an indirect tax introduced in India in 2017 that is imposed on the supply of goods and services, and it subsumes all indirect taxes except few. It is a destination-based tax imposed on goods and services used, and it is not imposed at the point of origin from where goods come. GST also has a few components specific to state governments, central government and Union Territories (UTs).

(A)  GST is imposed on the production of goods and services.

(B)  GST includes all indirect taxes.

(C)  GST does not have a component specific to UT.

(D)  GST is imposed at the point of usage of goods and services. 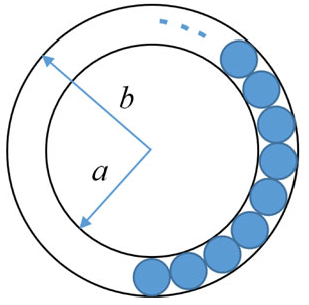 9. Two straight lines are drawn perpendicular to each other in X-Y plane. If α and β are the acute angles the straight lines make with t he X-axis, then α + β is _______. 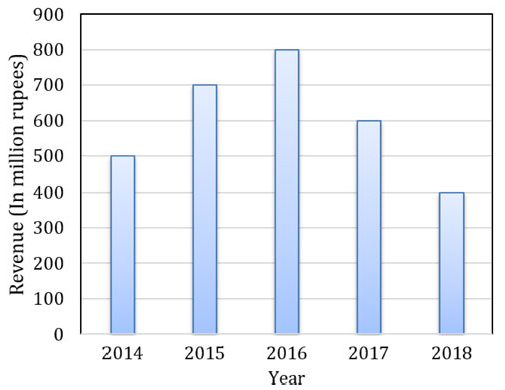 Which of the above functions is/are increasing everywhere in [0, 1]?

(I) Daisy chaining is used to assign priorities in attending interrupts.

(II) When a device raises a vectored interrupt, the CPU does polling to identify the source of interrupt.

(III) In polling, the CPU periodically checks the status bits to know if any device needs its attention.

(IV) During DMA, both the CPU and DMA controller can be bus masters at the same time.

Consider an instruction: R0 ← R1 + R2. The following steps are used to execute it over the given data path. Assume that PC is incremented appropriately. The subscripts r and w indicated read and write operations, respectively.

which one of the following is the correct order of execution of the above steps?

Which one of the following is the postorder traversal of the tree?

6. What is the worst case time complexity of inserting n2 elements into an AVL-tree with n elements initially?

7. Which one of the following regular expressions represents at set of all binary strings with an odd number of 1’s?

(II) The class of regular languages is closed under infinite union.

Which of the above statement is/are TRUE?

(I) Symbol table is accessed only during lexical analysis and syntax analysis.

(III) Errors violating the condition ‘any variable must be declared before its use’ are detected during syntax analysis.

(I) L is deterministic context-free.

(I) A running process can move to ready state.

(II) A ready process can move to running state.

(III) A blocked process can move to running state.

(IV) A blocked process can move to ready state.

Which of the above statements are TRUE?

The primary key of each table is indicated by underlining the constituent fields.

The number of rows returned by the above SQL query is

14. Which of the following is used to represent the supporting many-one relationship of a weak entity set in an entity-relationship diagram?

(A)  Diamonds with double/bold border

(B)  Rectangles with double/bold border

15. Consider the following statements about the functionality of an IP based router.

(I) A router does not modify the IP packets during forwarding.

(II) It is not necessary for a router to implement any routing protocol.

(III) A router should reassemble IP fragments if the MTU of the outgoing link is larger than the size of the incoming IP packet.

Which of the above statement is/are TRUE?

16. What is the worst case time complexity of inserting n elements into an empty linked list, if the linked list needs to be maintained in sorted order?

17. Let R be the set of all binary relations on the set {1, 2, 3}. Suppose a relation is chosen from R at random. The probability that the chosen relation is reflexive (round off to 3 decimal places) is _______.

19. A multiplexer is placed between a group of 32 registers and an accumulator to regulate data movement such that at any given point in time the content of only one register will move to the accumulator. The minimum number of select lines needed for the multiplexer is

20. If there are m input lines and n output lines for a decoder that is used to uniquely address a byte addressable 1 KB RAM, then the minimum value of m + n is _______. 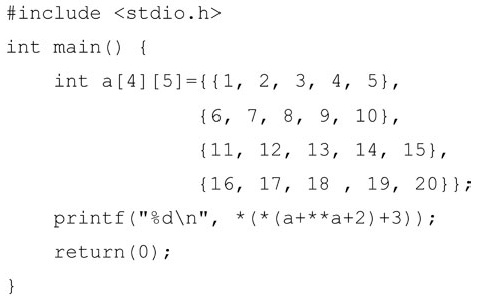 The number of reduction steps taken by a bottom-up parser while accepting the string aaadbbb is ______.

25. Assume that you have made a request for a web page through your web browser to a web server. Initially the browser cache is empty. Further, the browser is configured to send HTTP requests in non-persistent mode. The web page contains text and five very small images. The minimum number of TCP connections required to display the web page completely in your browser is ________.

26. Which of the following languages are undecidable? Note that

27. Let A and B be two n × n matrices over real numbers. Let rank(M) and det(M) denote that rank and determinant of a matrix M, respectively. Consider the following statements.

Which of the above statements are TRUE?

Which one of the following minterm list represents the circuit given above?

what is the value stored in R3?

30. A computer system with a word length of 32 bits has a 16 MB byte-addressable main memory and a 64 KB, 4-way set associative cache memory with a block size of 256 bytes. Consider the following four physical addresses represented in hexadecimal notation.

(A)  A1 and A4 are mapped to different cache sets.

31. Let G = (V, E) be a weighted undirected graph and let T be a Minimum Spanning Tree (MST) of G maintained using adjacency lists. Suppose a new weighted edge (u, v) ∈ V × V is added to G. The worst case time complexity of determining if T is still an MST of the resultant graph is

33. Consider the productions A → PQ and A → Each of the five non-terminals A, P, Q, X, and Y has two attributes: s is a synthesized attribute, and i is an inherited attribute. Consider the following rules.

(C)  Only Rule is L-attributed.

34. Each of a set of n processes executes the following code using two semaphores a and b initialized to 0 and not used in CODE SECTION P. 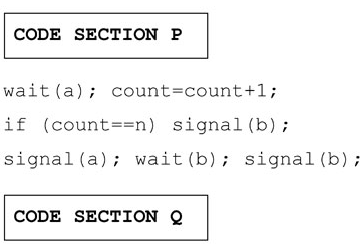 What does the code achieve?

(B)  It ensures that at most two processes are in CODE SECTION Q at any time.

(D)  It ensures that at mot n – n1 processes are in CODE SECTION P at any time.

35. Consider the following five disk access requests of the form (request id, cylinder number) that are present in the disk scheduler queue at a given time.

Assume the head is positioned at cylinder 100. The scheduler follows Shortest Seek Time First scheduling to service the requests.

Which one of the following statements is FALSE?

(C)  The head reverses its direction of movement between servicing of Q and P.

36. Consider a relational table R that is in 3NF, but not in BCNF. Which one of the following statements is TRUE?

(A)  R has a nontrivial functional dependency X → A, where X is not a superkey and A is a prime attribute.

(B)  R has nontrivial functional dependency X → A, where X  is not superkey and A is non-prime attribute and X is not a proper subset of any key.

(C)  R has a nontrivial functional dependency X → A, where X is not a superkey and A is a non-prime attribute and X is proper subset of some key.

(D)  A cell in R holds a set instead of an atomic value.

37. Consider a schedule of transactions T1 and T2:

Here, RX stands for “Read (X)” and WX stands for “Write(X)”. Which one of the following schedules is conflict equivalent to the above schedule?

39. Which one of the following predicate formulae is NOT logically valid?

Note that W is a predicate formula without any free occurrence of x.

Which one of the options completes the following sentence so that it is TRUE?

41. In an balanced binary search tree with n elements, what is the worst case time complexity of reporting all elements in range [a, b]? Assume that the number of reported elements is k.

42. The number of permutations of the characters in LILAC so that no character appears in its original position, if the two L’s are indistinguishable, is ______.

47. Consider the array representation of a binary min-heap containing 1023 elements. The minimum number of comparisons required to find the maximum in the heap is ______. 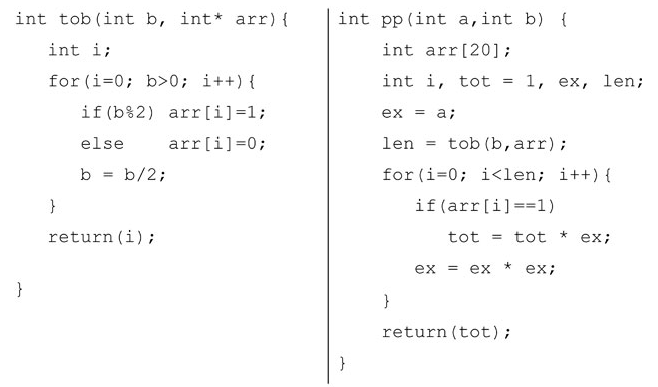 50. Consider the following set of processes, assumed to have arrived at time 0. Consider the CPU scheduling algorithms Shortest Job First (SJF) and Round Robin (RR). For RR, assume that the processes are scheduled in the order P1, P2, P3, P4.

If the time quantum for RR is 4 ms, then the absolute value of the difference between the average turnaround times (in ms) of SJF and RR (round off to 2 decimal places) is ______.

52. Graph G is obtained by adding vertex s to K3, 4 and making s adjacent to every vertex of K3,4. The minimum number of colours required to edge-colour G is ______.

53. Consider a paging system that uses 1-level page table residing in main memory and a TLB for address translation. Each main memory access takes 100 ns and TLB lookup takes 20 ns. Each page transfer to/from the disk takes 5000 ns. Assume that the TLB hit ratio is 95%, page fault rate is 10%. Assume that for 20% of the total page faults, a dirty page has to be written back to disk before the required page is read in from disk. TLB update time is negligible. The average memory access time in ns(round of to 1 decimal places) is ______.

54. Consider a database implemented using B+ tree for file indexing and installed on a disk drive with block size of 4 KB. The size of search key is 12 bytes and the size of tree/disk pointer is 8 bytes. Assume that the database has one million records. Also assume that no node of the B+ tree and no records are present initially in main memory. Consider that each record fits into one disk block. The minimum number of disk accesses required to retrieve any record in the database is ________.

55. Consider a TCP connection between a client and a server with the following specifications: the round trip time is 6 ms, the size of the receiver advertised window is 50 KB, slow-start threshold at the client is 32 KB, and the maximum segment size is 2 KB. The connection is established at time t = 0. Assume that there are no timeouts and errors during transmission. Then the size of the congestion window (in KB) at time t + 60 ms after all acknowledgements are processed is _______.