1. The untimely loss of life is a cause of serious global concern as thousands of people get killed ______ accidents every year while many other die ______ diseases like cardio vascular disease, cancer, etc.

4. The Canadian constitution requires that equal importance be given to English and French. Last year, Air Canada lost a lawsuit, and had to pay a six-figure fine to a French-speaking couple after they filed complaints about formal in-flight announcements is English lasting 15 seconds, as opposed to informal 5 second messages in French.

(A)    the in-flight announcements being made in English.

(B)    the English announcements being clearer than the French ones.

(C)    the English announcements being longer than the French ones.

(D)    equal importance being given to English and French.

Which of the following functions is a superadditive function for x > 1?

Which one of the following sequences shows the correct precedence as per the given passage?

7. It is quarter past three in your watch. The angle between the hour hand and the minute hand is ________.

8. A circle with centre O is shown in the figure. A rectangle PQRS of maximum possible area is inscribed in the circle. If the radius of the circle is a, then the area of the shaded portion is ______.

(A)  It is not necessary that these vectors span R4.

(B)  These vectors are not linearly independent.

(C)  Any four of these vectors form a basis for R4.

2. For a vector field

, which one of the following is FALSE?

is another vector field.

3. The partial derivative of the function f(x, y, z)

4. The general solution of

5. The output y[n] of a discrete-time system for an input x[n] is

The unit impulse response of the system is

6. A single crystal intrinsic semiconductor is at a temperature of 300 K with effective density of states for holes twice that of electrons. The thermal voltage is 26 mV. The intrinsic Fermi level is shifted from mid-bandgap energy level by

7. Consider the recombination process via bulk traps in a forward biased pn homojunction diode. The maximum recombination rate is Umax. If the electron and the hole capture cross-sections are equal, which one of the following is FALSE?

(A)  With all other parameters unchanged, Umax decreases if the intrinsic carrier density is reduced.

(B)  Umax occurs at the edges of the depletion region in t he device.

(D)  With all other parameters unchanged, Umax increases if the thermal velocity of the carriers increases.

8. The components in the circuit shown below are ideal. If the op-amp is in positive feedback and the input voltage Vi is a since wave of amplitude 1 V, the output voltage Vo is

(A)  a non-inverted sine wave of 2 V amplitude.

(B)  an inverted sine wave of 1 V amplitude.

9. In the circuit shown below, the Thevenin voltage VTH is

10. The figure below shows a multiplexer where S1 and S0 are the select lines, I0 to I3 are the input data lines, EN is the enable line, and F(P, Q, R) is the output. F is 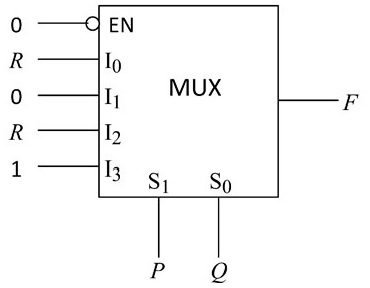 11. The pole-zero map of a rational function G(s) shown below. When the closed contour Γ is mapped into the G(s)-plane, then the mapping encircles

(A)  the origin of the G(s)-plane once in the counter-clockwise direction.

(B)  the origin of the G(s)-plane once in the clockwise direction.

12. A digital communication system transmits a block of N bits. The probability of error in decoding a bit is α. The error event of each bit is independent of the error events of the other bits. The received block is erroneous if at least one of its bits is decoded wrongly. The probability that the received block is erroneous is

(B)  a point at the centre of the chart.

(C)  a line passing through the centre of the chart.

14. Which one of the following pole-zero plots corresponds to the transfer function of an LTI system characterized by the input-output difference equation given below?

15. In the given circuit, the two-port network has the impedance matrix

The value of ZL for which maximum power is transferred to the load is ________ Ω. 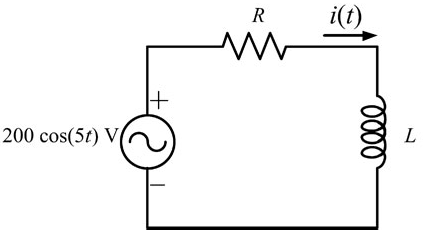 17. In the circuit shown below, all the components are ideal and the input voltage is sinusoidal. The magnitude of the steady-state output V0(rounded off to two decimal places) is _______ V.

23. The loop transfer function of a negative feedback system is

25. The two sides of a fair coin are labelled as 0 and 1. The coin is tossed two times independently. Let M and N denote the labels corresponding to the outcomes of those tosses. For a random variable X, defined as X = min(M, N), the expected value E(X) (rounded off to two decimal places) is _______.

Which one of the following conditions ensures that a solution exists for the above system?

27. Which one of the following options contains two solutions of the differential equation

28. The current I in the given network is

Which one of the following statements is TRUE?

30. For the given circuit, which one of the following is the correct state equation? 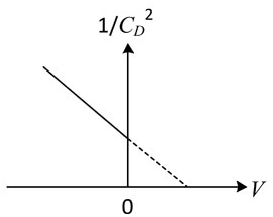 32. The band diagram of a p-type semiconductor with a band-gap of 1 eV is shown. Using this semiconductor, a MOS capacitor having VTH of −16 V C′ox of 100 nF/cm2 and a metal work function of 3.87 eV is fabricated. There is no charge within the oxide. If the voltage across the capacitor is VTH, the magnitude of depletion charge per unit area (in C/cm2) is 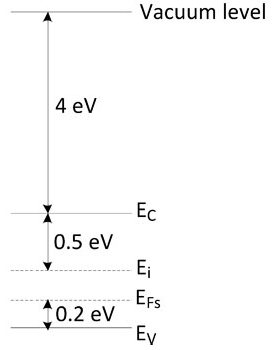 33. The base of an npn BJT T1 has a linear doping profile NB(x) as shown below. The base of another npn BJT T2 has a uniform doping NB of 1017 cm−3. All other parameters are identical for both the devices. Assuming that the hole density profile is the same as that of doping, the common-emitter current gain of T2 is

35. For the BJT in the amplifier shown below, VBE = 0.7 V, kT/q = 26 mV. Assume that BJT output resistance (r0) is very high and the base current is negligible. The capacitors are also assumed to be short circuited at signal frequencies. The input vi is direct coupled. The low frequency voltage gain v0/vi of the amplifier is

36. An enhancement MOSFET of threshold voltage 3 V is being used in the sample and hold circuit given below. Assume that the substrate of the MOS device is connected to −10 V. If the input voltage v1 lies between ±10 V, the minimum and the maximum values of vG required for proper sampling and holding respectively, are

37. Using the incremental low frequency small-signal model of the MOS device, the Norton equivalent resistance of the following circuit is 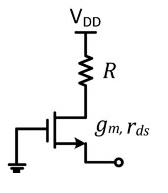 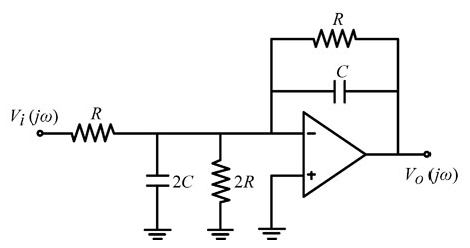 43. For an infinitesimally small dipole in free space, the electric field Eθ in the far field is proportional to (e−jkr/r) sin θ, where k = 2π/λ. A vertical infinitesimally electric dipole (δl << λ) is placed at a distance h(h > 0) above an infinite ideal conducting plane, as shown in the figure. The minimum value of h, for which one of the maxima in the far field radiation pattern occurs at θ = 60°, is 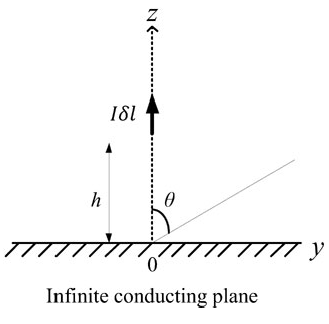 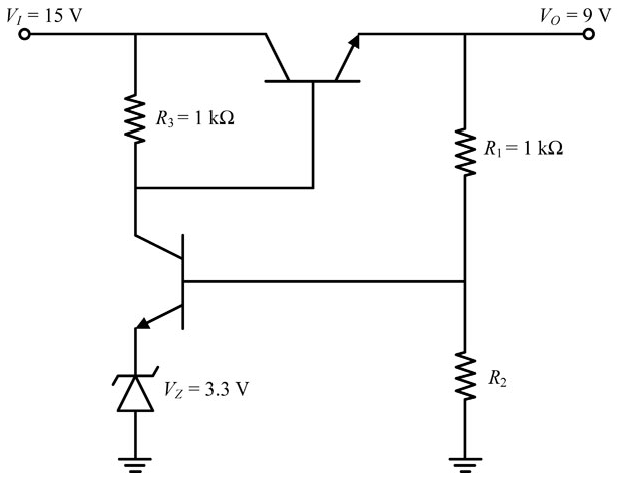 45. The magnetic field of a uniform plane wave in vacuum is given by

46. For a 2-port network consisting of an ideal lossless transformer, the parameter S21 (rounded off to two decimal places) for a reference impedance of 10 Ω, is _______.

47. SPM(t) and S­FM(t) as defined below, are the phase modulated and the frequency modulated waveforms, respectively, corresponding to the message signal m(t) shown in the figure.

48. In a digital communication system, a symbol S randomly chosen from the set {s1, s2, s3, s4} is transmitted. It is given that s1 = −3, s2 = −1, s3 = +1 and s4 = +2. The received symbol is Y = S + W. W is a zero-mean unit-variance Gaussian random variable and is independent of S. Pi­ is the conditional probability of symbol error for the maximum likelihood (ML) decoding when the transmitted symbol S = si. The index i for which the conditional symbol error probability Pi is the highest is _________.

49. A system with transfer function

is subjected to an input 5 cos 3t. The steady state output of the system is

50. For the components in the sequential circuit shown below, tpd is the propagation delay, tsetup is the setup time, and thold is the hold time. The maximum clock frequency (rounded off to the nearest integer), at which the given circuit can operate reliably, is _________ MHz.

51. For the solid S shown below, the value of 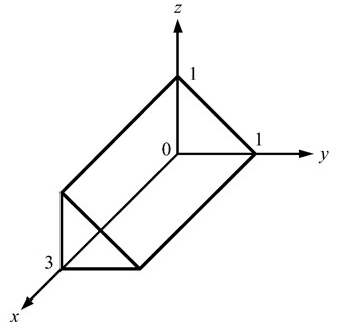 52. X(ω) is the Fourier transform of x(t) shown below. The value of 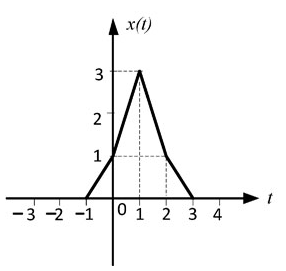 53. The transfer function of a stable discrete-time LTI system is

where K and α are real numbers. The value of α (rounded off to one decimal place) with |α| > 1, for which the magnitude response of the system is constant over all frequencies, is _______.