1. He is known for his unscrupulous ways. He always sheds______ tears to deceive people.

2. Jofra Archer, the England fast bowler, is ____ than accurate.

10. The bar graph shows the data of the students who appeared and passed in an examination for four schools P, Q, R and S. The average of success rates (in percentage) of these four schools is ________.

are the unit vectors along the x,  y, and z directions, respectively. The divergence of A at the point (1, 1, 1) is equal to

2. Inverse Laplace transform of the function,

3. The solution of the differential equation, 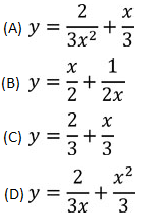 4. Two complex numbers are given as,

which one of the following conditions is correct?

6. Shear stress versus shear rate plots for four different fluids are given in the Figure. Which curve represents a pseudoplastic fluid? 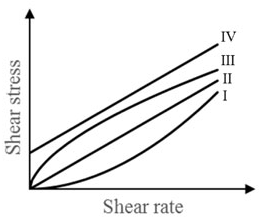 7. Which one of the following is NOT a desired function of a hydraulic fracturing fluid additive?

(A)  Oxygen scavenging to prevent attack on polymers.

(B)  Increasing viscosity of fracturing fluid during flow back.

8. Formation damage could be a result of

(i) scale formation near the wellbore

9. Which of the following statement(s) about gas and water coning in the reservoir is/are correct?

Which one of the following options represents the correct combination of the trajectory number and the corresponding drilling type?

11. A stable geothermal gradient (approx. 25°C/km) in the earth’s crust will suddenly increase to a higher gradient value, when

(A)  there is excessive erosion or upliftment

(B)  there is excessive subsidence or deposition

(C)  there is excessive subsidence and  upliftment simultaneously

(D)  there is excessive subsidence and erosion simultaneously

12. A drawdown test is conducted at a constant flow rate in an oil well for a reservoir with constant compressibility. Which one of the following is valid for semi steady state condition?

(A)  Rate of pressure change at the wellbore is less than that at the boundary.

(B)  The effect of the outer boundary of the reservoir is felt at the wellbore.

(C)  Reservoir permeability does not affect the wellbore pressure.

(D)  Pressure in the reservoir does not change with time.

13. Formation volume factor (B0) versus Pressure (P) plot for an oil is given in the Figure.

Match the following with the corresponding pressure given in the Figure.

14. Which one of the following statements is NOT correct?

(A)  Flash point of gasoline is lower than that of diesel.

(B)  Pour point is the temperature at which oil creases to flow.

(C)  Higher the Diesel Index of a fuel, higher is its cetane number.

(D)  Higher the aromatic content of diesel, higher is its aniline point.

15. Which one of the following additives is commonly added to drilling fluids to remove hydrogen sulfide?

17. Which one of the following options best represents the correct order of increasing thermal conductivity of the subsurface formations?

18. Which one of the following options is the correct combination of kerogen Type and the source from which it is derived?

19. The number of power outages in a city in a given time interval is a Poisson random variable with a mean of 2 power outages per month. The Poisson distribution is given by,

The probability of exactly 2 power outages in 2 months (rounded off to two decimal places) is _______.

24. A build up test was performed on a well after 1000 hours of oil production. During the shut-in period, the Horner’s approximation is valid which results in the following equation relating the shut-in well pressure (P­ws) to the shut-in time:

25. The initial oil production from on offshore well is 1000 STB/day, which decreased to 960 STB/day in 30 days. Using the ‘exponential decline model’, the daily production rate after 360 days from the start (rounded off to one decimal place) will be ________ STB/day.

For a steady-state flow operation, the system of equations for flow rates is given by,

The correct option for the numeric value of X is

28. An compressible fluid is flowing through a tube of radius, R and length, L. The shear rate dependence of the fluid viscosity is given by the power law,

is the scalar shear rate, k is a constant, and n is the flow behavior index. Assuming the flow to be steady, laminar, and fully developed, the velocity profile inside the tube for a pressure drop of ∆p applied across the tube is 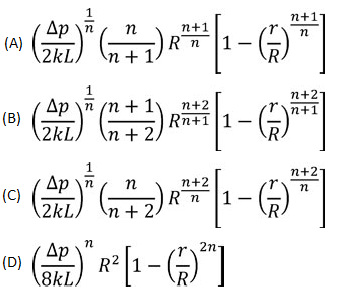 30. The plot of volume (V) versus pressure (P) for two reservoir fluids (I and II) obtained in a constant composition expansion (CCE) is shown in the Figure, Here, Vsat is saturation volume and Psat is saturation pressure. The measurements were carried out at constant temperature (the measured reservoir temperature) throughout the experiment. Which one of the following statements for the type of reservoir is correct ? 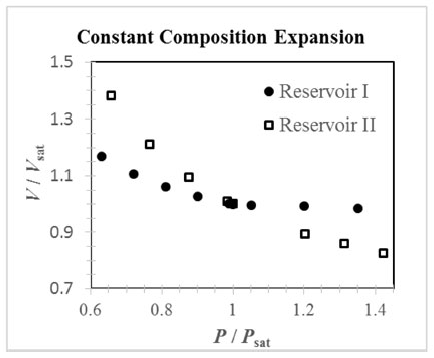 (A)  I is a gas condensate reservoir and II is an oil reservoir.

(B)  I is an oil reservoir and II is a gas condensate reservoir,

(D)  I is a dry gas reservoir and II is gas condensate reservoir.

31. The following primary and secondary porosity types are prevalent in the subsurface formations:

Which one of the following options represents the correct combination?

32. In the given Figure, which one of the following options represents the correct combination of drainage and imbibitions processes for a water wet rock in the subsurface, as indicated by number 1 to 4? 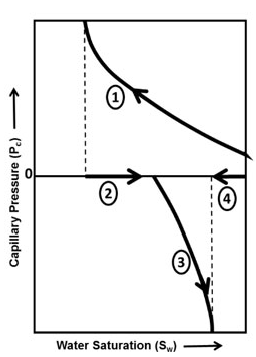 33. The following notations are defined for a porous medium:

Sp = surface area of the pore per unit bulk volume of the core,

C = geometric factor of the pore. 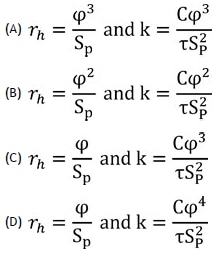 35. Select the correct combination of a floating vessel motion in a horizontal plane (P) and a vertical plane (Q)

37. The axis of a cylinder of radius a and length L is along the z-axis with center of the flat surface at (0, 0, 0). An inextensible string of negligible thickness is wound tightly as a right-handed helix around the curved surface of the cylinder. The two ends of the string are at (a, 0, 0) and (a, 0, L).

The parametric equation of the right-handed helix is given by,

where r, is the position vector and θ is in radian.

38. A data set containing n ( = 10) independent measurements (xi, yi) is to be fitted by a simple linear regression model. The last square estimates of regression coefficients are obtained and the regression estimate is given by

The values are given below:

For the given data set, the unbiased variance for the error

39. A porous medium of 10 cm length is made of three horizontal, cylindrical capillaries of inside diameters 2 μm, 4 μm, and 6 μm as shown in the Figure (not to scale).

When the pressure drop is increased to 30 kPa, the maximum oil saturation (rounded off to two decimal places) will be ________ (in fraction).

40. A unidirectional, immiscible displacement of an oil is carried out with water in a cylindrical reservoir core sample (Buckley-Leverett theory is applicable). The connate water saturation is 0.25. A fractional flow of water (fw) vs. water saturation (Sw) curve is drawn for the process. A line drawn from a point (Sw = 0.25, fw = 0) on the fractional flow curve is tangent at the point (Sw = 0.8, fw = 0.8) on the curve.

in the core at the time of breakthrough (rounded off to two decimal places) is _______ (in fraction).

where, ϕe is the effective porosity available for the fluids. The permeability of the hydrate bearing porous medium (rounded off to two decimal places) is ______ mD.

42. The slip velocity for a gas-liquid flow in a vertical production well is 0.1 m/s. The superficial velocity of each of the phases is 0.1 m/s. The fractional hold-up of the gas phase (rounded off to two decimal places) is ______.

43. A three stage reciprocating compressor is to compress 4 mol/s of methane from 1 bar absolute to 60 bar absolute pressure. The gas temperature is 303 K at the suction. The compression ratio in each stage is equal and the compression is isentropic. The gas behaves as an ideal gas and the ratio of specific heat capacities (Cp/Cv) is 1.4. Take gas constant, R = 8.31 J mol−1 K−1.

The minimum work rate of compression required for the gas (rounded off to two decimal places) is _______ kJ/s.

If the pre-flush has to remove all the dolomite, the volumetric dissolving power of the pre-flush (rounded off to three decimal places) is _______ (m3 of dolomite/m3 of 15 wt% HCl solution).

47. It is desired to determine the radius of investigation (rinv) of a low-permeability and low-pressure gas reservoir which produces under a constant flow rate. Use the following data:

Assuming transient flow conditions are valid, the radius of investigation (rinv) after 200 hours of gas production (rounded off to one decimal place) is ______ ft.

48. Well stimulation is carried out in a homogeneous formation. The well is stimulated up to a radial of 54 inch from the surface of the wellbore. The diameter of the wellbore is 12 inch. The permeability enhancement in the stimulated region is found to be 10 times that of the unstimulated region. Assuming steady-state radial flow, the skin factor after stimulation (rounded off to two decimal places) is _______.

49. A gas reservoir has a permeability of 1.0 mD, which is to be fractured hydraulically to create a 600 m long and 0.30 cm wide fracture of 2 × 105 mD permeability around the center of damage area. The fracture conductivity for the well (rounded off to two decimal places) is _______.

50. A producing oil well with the drainage to wellbore radius ratio of 2981 is found to have a skin factor of 8. Assume steady state operation and negligible pressure drop in the tubing.

The ratio of production rate of the ‘damaged’ to the ‘undamabged’ well (rounded off to two decimal places) is _______.

51. It is desired to prepare a Class H cement slurry having a density of 2100 kg/m3 using hematite as an additive. The water requirement for the Class H cement is 20 litre/50 kg cement and that for hematite is 3 litre/1000 kg hematite.

Assuming zero volume change of mixing, the amount of hematite that should be blended with one sack of cement (rounded off to two decimal places) is _______ kg.

52. A gas reservoir without aquifer is at 300 bar (absolute) and 90° The GIIP (gas initial in place) is 107 m3 (at surface conditions). Neglect formation and water compressibility.

If the reservoir pressure reduces to 100 bar (absolute) under isothermal conditions, the total volume of gas (at surface conditions) produced from the reservoir (rounded off to two decimal places) is _______ × 106 m3.

53. Given the following data of a shale gas formation:

Consider that only water and gas are present in the formation and the following equations apply,

where, ρf is the fluid density, φT is the total porosity, and VTOC is the volume fraction of TOC.

55. A cylindrical core sample of 4 inch diameter and 20 inch length is obtained from a consolidated reservoir sand. At the reservoir temperature, the formation water resistivity (Rw) is 0.15 ohm-m whereas, the resistance of the core, which is 100% saturated with brine, is 100 ohm. Use the generalized form of the Archie’s formula relating Formation Resistivity Factor (FR) and the porosity (φ). Assume, a(tortuosity factor) = 1, and m (cementation factor) = 2.