(ii) Arun and Aparna is here. 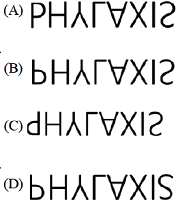 3. Two identical cube shaped dice each with faces numbered 1 to 6 are rolled simultaneously. The probability that an even number is rolled out on each dice is:

5. Four persons P, Q, R and S are to the seated in a row, R should not be seated at the second position from the left end of the row. The number of distinct seating arrangement possible is:

The distance of point Q to point O, in the same units, should be_____

(A)  The author is of the opinion that rehearsing is important for musicians, actors and public speakers.

(B)  The author is of the opinion that rehearsing is  less important for public speakers than for musicians and actors.

(C)  The author is of the opinion that rehearsing is more important only for musicians than public speakers.

(D)  The author is of the opinion that rehearsal is more important for actors than musicians.

Among the options given below, the statement that logically follows from the two statements 1 and 2 above, is:

(A)  No football player plays hockey.

(B)  Some football players play hockey.

9. In the figure shown above, PQRS is a square. The shaded portion is formed by the intersection of sectors of circles with radius equal to the side of the square and centers at S and Q.

The minimum area of the triangle PQR possible, in cm2, is

to be a valid probability distribution function of a random variable X, the value of q is _____.

2. Given a scalar function

the directional derivative of V in the direction of the vector field 3yi – 3xj at the point (1, 1) is _____. (Note: i and j are the unit vectors along the x and y directions, respectively.)

3. Three resistive loads are connected to ideal voltage and current sources as shown in the circuit below. The voltage VAB across the terminals A and B is equal to ________ V.

6. In the circuit shown below, Y is a 2-bit (Y1Y0) output of the combinational logic. What is the maximum value of Y for any given digital inputs, A1A0 and B1B0?

7. In the block diagram shown below, an analog signal, VIN = sin(2π106t) is quantized by a 10-bit Nyquist ADC. Later, 4 LSBs are dropped and 6 MSBs are converted to an analog signal (VOUT) while using a 6-bit DAC. Assume uniform distribution for the quantization noise. The peak SQNR at the output of DAC is _____ dB.

8. For a linear stable second order system, if the unit step response is such that the peak time is twice the rise time, then the system is _____.

9. Which of the following displacement sensors is known to have a high sensitivity and a relatively larger measurement range?

10. Which of the following temperature sensors is used in contact-type digital thermometers for measuring body temperature?

12. Which of the following is a cranial bone in the human body?

13. Which of the following glands produces the thyroid stimulating hormone (TSH)?

14. Which of the following causes Myocardial Infarction (MI)?

15. If we consider blood as a suspension of RBCs in a Newtonian fluid, the shear forces experienced by the RBCs during blood flow would ___________.

(A)  Randomize the orientation of blood cells

(B)  Align RBCs along their long axes with streamlines

(C)  Align RBCs along their short axes with streamlines

16. As shown in the figure, the water contact angles of surfaces A and B are θA and θB, respectively. Based on the figure, which of the following statements given below is TRUE?

(A)  Surface A is hydrophilic and surface B is hydrophobic

(B)  Surface A is hydrophobic and surface B is hydrophilic

(C)  Both surfaces are hydrophilic

(D)  Both surfaces are hydrophobic

17. Which of the following is a bone resorbing cell?

18. Which of the following statements are CORRECT in the context of planar X-ray imaging?

19. While comparing parallel fiber and pinnate muscles of a given volume, which of the following statements are TRUE?

20. Which of the following may cause failure of bone implants?

(D)  Osseointegration – formation of a direct interface between an implant and a bone, without intervening soft tissues

is converted to a discrete time transfer function H(z) using a bilinear transform at 100 MHz sampling rate. The pole of H(z) is located at z = ____.

23. Consider a type 2, unity feedback system. The intersection of the initial −40 dB/dec segment, of its Bode plot, with the zero dB line occurs at a frequency of 2 rad/s. The acceleration error constant of the system Ka is ___.

27. A unit step input is applied to a system with impulse response 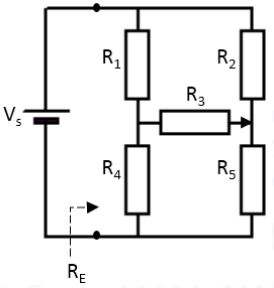 31. In the block diagram shown below, an infinite tap FIR filter with transfer function H(z) = Y(z)/X(z) is realized. If

33. In the circuit diagram shown below, all OPAMPs are ideal with infinite gain and bandwidth. VOUT/VIN for this circuit is ______.

34. In the circuit diagram shown below, NMOS is in saturation region, μnCox = 200 μA/V2, width W = 40 μm, length L = 1 μm, the threshold voltage is 0.4 V, and the ratio of body-effect transconductance (gmb) to transconductance (gm) is 0.1. A small input voltage vin is applied at the bulk-terminal to produce a small change in the output voltage vout. The dc gain for vout/vin is _______. (Neglect channel-length modulation for NMOS and all intrinsic capacitors)

35. As shown in the circuit below, a constant voltage source is connected to two ideal resistors.

The voltage drop across a resistor is measured using two different voltmeters V1 and V2 at five different time instances and the following values are recorded from V1 and V2.

Which of the following is TRUE?

The frequency of oscillations of this closed-loop system at steady state is ______ rad/s.

37. Match the following in the context of biomaterial characterization:

(A)  A comparable gain and smaller bandwidth

(B)  A comparable gain and larger bandwidth

(C)  At least 20 dB higher gain and a larger bandwidth

(D)  At least 20 dB lower gain and a smaller bandwidth

39. Match the following organs with their functions:

40. An RF pulse is applied to acquire an axial MR image at the isocenter of a 1.5T MRI scanner with slice thickness of 2.5 mm. Assuming a gradient field strength of 2 Gauss/cm is applied and Gyromagnetic ratio of protons is 42.58 MHz/T, the RF pulse bandwidth required for slice selection is _______ kHz.

41. A longitudinal pressure wave travelling inside a muscle tissue is incident at an angle of 60° at the interface between the muscle and kidney. Let the wave impedance be Zmuscle = 1.70 × 105g cm−2 s−1, Zkidney = 1.62 × 105g cm−2 s−1 and wave velocities in muscle and kidney tissues be 1590 and 1560 m/s respectively. The transducer centre frequency is 1.5 MHz. The pressure wave propagation angle in the kidney tissue and intensity transmission coefficient at the tissue interface are ________degrees (rounded off to the nearest integer) and ______ (rounded off to two decimal places), respectively.

42. A novel biomaterial was tested for its tensile properties. The experiment was conducted using a cylindrical sample of this material, which was 10 cm long with 1 cm diameter. When a tensile force of 50 kN was applied, this cylindrical sample elongated by 4 mm. Based on the experimental results described above and the tensile moduli of different tissues given in the table below, this biomaterial would be a suitable replacement for __________.

44. An inexperienced clinician was measuring the cardiac output of a healthy human by thermo dilution technique. A 2.0 mL of cold saline solution of volume (Vi) at 7 °C was injected at the entrance of the right atrium. The change in blood temperature  at the pulmonary artery was measured to be −20 Kelvin. second. The cardiac output F was calculated using the following formula

where Q is the heat content of injectate in Joules, given by Vi∆Tiρici and ∆Ti is the temperature difference between the injectate and blood. It was assumed that the density of blood (ρb in kg/m3) and the specific heat

capacity of blood (cb in J/(kg. K)) were respectively equal to that of the injectate ρi and ci.

The clinician realized that there was an error in the measurement of F. Which of the following is TRUE?

(B)  Cardiac output is too low because

(D)  Cardiac output is too high because

45. Which of the following statements about smooth muscles are TRUE?

(A)  Smooth muscles are found in the walls of hollow organs

(B)  Smooth muscles are controlled by the autonomic nervous system

(C)  Smooth muscles are made up of non-striated cells

(D)  Smooth muscles are made up of striated cells

The steady state error with respect to a unit ramp input is ____. (rounded off to one decimal place)

50. In the circuit given below, Vs = 50 V. Let the circuit reach steady state for the SPDT switch at position 1. Once the circuit is switched to position 2, the energy dissipated in the resistors is _______ J. (rounded off to one decimal place)

52. A pacemaker was implanted in a cardiac patient. It has a battery of 2.4 A.h (Ampere.hour). It is designed to deliver a rectangular pulse of amplitude 1.5 V for 1 ms ON time for every one second. The electrode – heart resistance is 150 Ω. Assuming the current drained from the battery is negligible, the lifetime of the pacemaker is _____ years. (rounded off to the nearest integer)

55. A PZT crystal of thickness 1 mm and wave velocity 4000 m/s is emitting a longitudinal pressure wave, which is incident on a blood vessel at an angle of 30°. The doppler shift in the ultrasound wave for a blood flow of 10 cm/s and wave velocity in the soft tissue of 1540 m/s is ______ Hz.