2. A transparent square sheet shown above is folded along the dotted line. The folded sheet will look like ________.

3. For a regular polygon having 10 sides, the interior angle between the sides of the polygon, in degrees, is:

6. The importance of sleep is often overlooked by students when they are preparing for exams. Research has consistently shown that sleep deprivation greatly reduces the ability to recall the material learnt. Hence, cutting down on sleep to study longer hours can be counterproductive.

Which one of the following statements is the CORRECT inference from the above passage?

(A)  Sleeping well alone is enough to prepare for an exam. Studying has lesser benefit.

(B)  Students are efficient and are not wrong in thinking that sleep is a waste of time.

(C)  If a student is extremely well prepared for an exam, he needs little or no sleep.

(D)  To do well in an exam, adequate sleep must be part of the preparation. 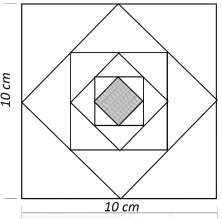 In the figure shown above, each inside square is formed by joining the midpoints of the sides of the next larger square. The area of the smallest square (shaded) as shown, in cm2 is: 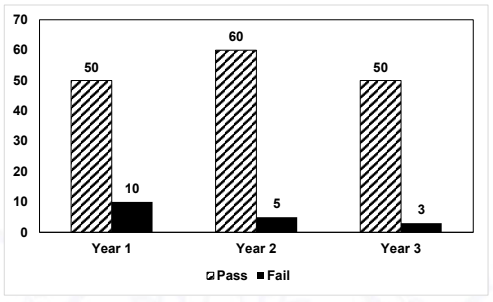 exam in their second attempt.

Based on the above statements, the only INCORRECT option given below is:

(A)  There are two cars parked in between Q and V.

(B)  Q and R are not parked together.

(D)  Car P is parked at the extreme end.

(D)  All the roots cannot be real

4. For the network shown, the equivalent Thevenin voltage and Thevenin impedance as seen across terminals ‘ab’ is

5. Which one of the following vector functions represents a magnetic field

are unit vectors along x-axis, y-axis, and z-axis, respectively)

(A)  linear and time-variant

(B)  linear and time-invariant

8. Consider the table given:

The correct combination that relates the constructional feature, machine type and mitigation is

9. Consider a power system consisting of N number of buses. Buses in this power system are categorized into slack bus, PV buses and PQ buses for load flow study. The number of PQ buses is NL. The balanced Newton-Raphson method is used to carry out load flow study in polar form. H, S, M, and R are sub-matrices of the Jacobian matrix J as shown below:

The dimension of the sub-matrix M is

10. Two generators have cost functions F1 and F2. Their incremental-cost characteristics are

They need to deliver a combined load of 260 MW. Ignoring the network losses, for economic operation, the generations P1 and P2 (in MW) are

11. For the closed-loop system shown, the transfer function 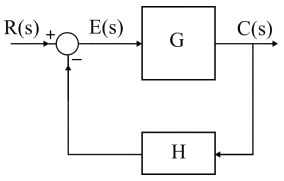 12. Inductance is measured by

in SI units. All coordinates are in meters.

20. The Bode magnitude plot for the transfer function

21. A signal generator having a source resistance of 50 Ω is set to generate a 1 kHz sinewave. Open circuit terminal voltage is 10 V peak-to-peak. Connecting a capacitor across the terminals reduces the voltage to 8 V peak-to-peak. The value of this capacitor is ______ μ (Round off to 2 decimal places.)

22. A 16-bit synchronous binary up-counter is clocked with a frequency fCLK. The two most significant bits are OR-ed together to form an output Y. Measurements show that Y is periodic, and the duration for which Y remains high in each period is 24 ms. The clock frequency fCLK is __________ MHz. (Round off to 2 decimal places.) 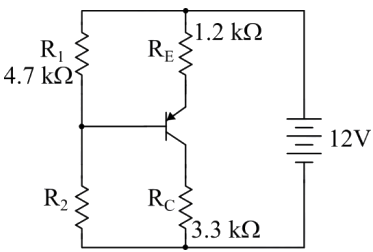 27. Suppose the probability that a coin toss shows “head” is p, where 0 < p < 1. The coin is tossed repeatedly until the first “head” appears. The expected number of tosses required is

30. The input impedance, Zin(s), for the network shown is

34. In the figure shown, self-impedances of the two transmission lines are 1.5j p.u each, and Zm = 0.5j p.u is the mutual impedance. Bus voltages shown in the figure are in p.u. Given that δ > 0, the maximum steady-state real power that can be transferred in p.u from Bus-1 to Bus-2 is

35. A 3-Bus network is shown. Consider generators as ideal voltage sources. If rows 1, 2 and 3 of the YBus matrix correspond to Bus 1, 2 and 3, respectively, then YBus of the network is

39. A three-phase balanced voltage is applied to the load shown. The phase sequence is RYB. The ratio 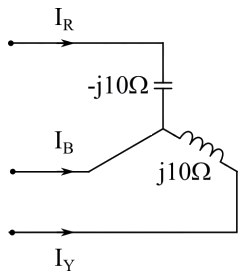 41. One coulomb of point charge moving with a uniform velocity

are unit vectors along x-axis, y-axis, and z-axis, respectively.)

42. Consider a large parallel plate capacitor. The gap d between the two plates is filled entirely with a dielectric slab of relative permittivity 5. The plates are initially charged to a potential difference of V volts and then disconnected from the source. If the dielectric slab is pulled out completely, then the ratio of the new electric field E2 in the gap to the original electric field E1 is __________.

45. An 8-pole, 50 Hz, three-phase, slip-ring induction motor has an effective rotor resistance of 0.08 Ω per phase. Its speed at maximum torque is 650 RPM. The additional resistance per phase that must be inserted in the rotor to achieve maximum torque at start is __________ Ω. (Round off to 2 decimal places.) Neglect magnetizing current and stator leakage impedance. Consider equivalent circuit parameters referred to stator.

46. Consider a closed-loop system as shown

. is the plant transfer function and Gc(s) = 1 is the compensator. For a unit-step input, the output response has damped oscillations. The damped natural frequency is ________________ rad/s. (Round off to 2 decimal places.)

47. In the given figure, plant

The external disturbance input is D(s). It is desired that when the disturbance is a unit step, the steady-state error should not exceed 0.1 unit. The minimum value of K is ________. (Round off to 2 decimal places.)

49. The state space representation of a first-order system is given as

50. An air-core radio-frequency transformer as shown has a primary winding and a secondary winding. The mutual inductance M between the windings of the transformer is ______ μ (Round off to 2 decimal places.) 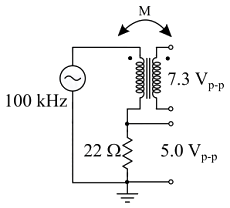 53. Consider the boost converter shown. Switch Q is operating at 25 kHz with a duty cycle of 0.6. Assume the diode and switch to be ideal. Under steady-state condition, the average resistance Rin as seen by the source is ______ Ω. (Round off to 2 decimal places.)

54. Consider the buck-boost converter shown. Switch Q is operating at 25 kHz and 0.75 duty-cycle. Assume diode and switch to be ideal. Under steady- state condition, the average current flowing through the inductor is_______ A.

55. A single-phase full-bridge inverter fed by a 325 V DC produces a symmetric quasi-square waveform across ‘ab’ as shown. To achieve a modulation index of 0.8, the angle θ expressed in degrees should be ________. (Round off to 2 decimal places.)

(Modulation index is defined as the ratio of the peak of the fundamental component of vab to the applied DC value.)