2. The mirror image of the above text about the x-axis is 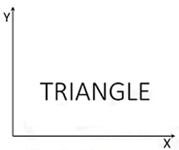 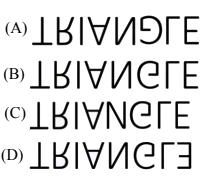 4. ⊕ and ⨀ are two operators on numbers p and q such that

5. Four persons P, Q, R and S are to be seated in a row, all facing the same direction, but not necessarily in the same order. P and R cannot sit adjacent to each other. S should be seated to the right of Q. The number of distinct seating arrangements possible is:

Among the options below, the logical NEGATION of the above statement is:

(B)  Neither P marries Q nor X marries Y.

Folding operation 1: The sheet is folded into half by joining the short edges of the current shape.

Folding operation 2: The sheet is folded into half by joining the long edges of the current shape.

Folding operation 1 is carried out on Sheet M three times.

Folding operation 2 is carried out on Sheet N three times.

8. Five line segments of equal lengths, PR, PS, QS, QT and RT are used to form a star as shown in the figure above. 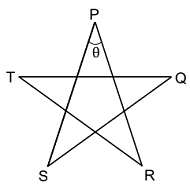 The value of the expression

10. Humans have the ability to construct worlds entirely in their minds, which don’t exist in the physical world. So far as we know, no other species possesses this ability. This skill is so important that we have different words to refer to its different flavors, such as imagination, invention and innovation.

(A)  No species possess the ability to construct worlds in their minds.

(B)  The terms imagination, invention and innovation refer to unrelated skills.

(C)  We do not know of any species other than humans who possess the ability to construct mental worlds.

(D)  Imagination, invention and innovation are unrelated to the ability to construct mental worlds.

3. An infinitely long line, with uniform positive charge density, lies along the z- axis. In cylindrical coordinates (r, ∅,z), at any point

not on the z-axis, the direction of the electric field is

4. The input-output relationship of an LTI system is given below.

For an input x[n] shown below

the peak value of the output when x[n] passes through h is ____.

7. Input-output characteristic of a temperature sensor is exponential for a

9. The step response of a circuit is seen to have an oscillatory behaviour at the output with oscillations dying down after some time. The correct inference(s) regarding the transfer function from input to output is/are

(A)  that it is of at least second order.

(B)  that it has at least one pole-pair that is underdamped.

(D)  that it is a first order system.

(A)  The ADC requires 15 comparators.

(B)  The ADC requires one 4 to 2 priority encoder and 4 comparators.

(C)  A change in the input voltage by v/16 will always flip MSB of the output.

(D)  A change in the input voltage by v/16 will always flip the LSB of the output.

11. A 16-bit microprocessor has twenty address lines (A0 to A19) and 16 data lines. The higher eight significant lines of the data bus of the processor are tied to the 8-data lines of a 16 Kbyte memory that can store one byte in each of its 16K address locations. The memory chip should map onto contiguous memory locations and occupy only 16 Kbyte of memory space. Which of the following statement(s) is/are correct with respect to the above design?

(A)  If the 16 Kbyte of memory chip is mapped with a starting address of 80000H, then the ending address will be 83FFFH.

(C)  The 16 Kbyte memory cannot be mapped with contiguous address locations with a starting address as 0F000H using only A19 to A14 for generating chip select.

(D)  The above chip cannot be interfaced as the width of the data bus of the processor and the memory chip differs.

12. A single-phase transformer has a magnetizing inductance of 250 mH and a core loss resistance of 300 Ω, referred to primary side. When excited with a 230 V, 50 Hz sinusoidal supply at the primary, the power factor of the input current drawn, with secondary on open circuit, is ____ (rounded off to two decimal places).

13. Taking N as positive for clockwise encirclement, otherwise negative, the number of encirclements N of (−1 , 0) in the Nyquist plot of

14. The diode used in the circuit has a fixed voltage drop of 0.6 V when forward biased. A signal vs is given to the ideal OpAmp as shown. When vs is at its positive peak, the output (vOA) of the OpAmp in volts is _______. 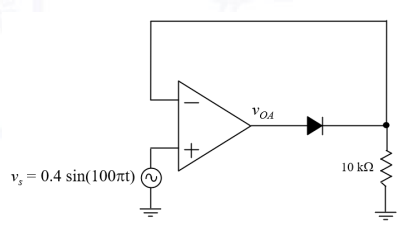 19. Given: Density of mercury is 13,600 kg/m3 and acceleration due to gravity is 9.81 m/s2. Atmospheric pressure is 101 kPa. In a mercury U-tube manometer, the difference between the heights of the liquid in the U-tube is 1 cm. The differential pressure being measured in pascal is ______ (rounded off to the nearest integer).

20. A piezoresistive pressure sensor has a sensitivity of 1 (mV/V)/kPa. The sensor is excited with a dc supply of 10 V and the output is read using a 3½ digit 200 mV full-scale digital multimeter. The resolution of the measurement set-up, in pascal is ___.

21. An amplitude modulation (AM) scheme uses tone modulation, with modulation index of 0.6. The power efficiency of the AM scheme is ____ % (rounded off to one decimal place).

22. When the movable arm of a Michelson interferometer in vacuum (n = 1) is moved by 325 μm, the number of fringe crossings is 1000. The wavelength of the laser used in nanometers is ____.

defined in the complex plane. The integral

over the contour of a circle c with center at the origin and unit radius is _____. 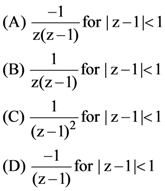 (A)  The starting torque would be higher.

(B)  The power factor at start will be lower.

(C)  The starting current is higher.

(D)  The losses at starting would be lower.

29. Consider a unity feedback configuration with a plant and a PID controller as shown in the figure

with K being scalar. The closed loop is

(D)  stable for all values of K

30. The output Vo of the ideal OpAmp used in the circuit shown below is 5 V Then the value of resistor RL in kilo ohm (kΩ) is 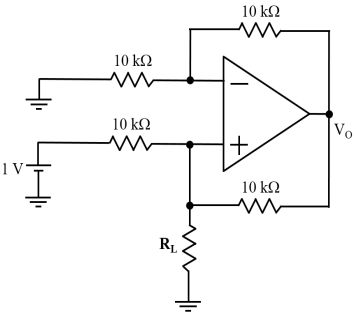 31. A Boolean function F of three variables X, Y, and Z is given as

Which one of the following is true?

32. A 10½ digit Counter-timer is set in the ‘frequency mode’ of operation (with Ts = 1 s). For a specific input, the reading obtained is 1000. Without disconnecting this input, the Counter-timer is changed to operate in the ‘Period mode’ and the range selected is microseconds (μs, with fs = 1 MHz). The counter will then display

33. A J-type thermocouple has an output voltage Vθ = (13650 + 50 θx) μV, where θx is the junction temperature in Celsius (°C). The thermocouple is used with reference junction compensation, as shown in the figure. The Instrumentation amplifier used has a gain G = 20. If If θRef is 1 °C, for an input θx of 100°C, the output Vo of the instrumentation amplifier in millivolt is 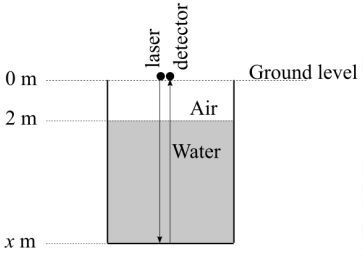 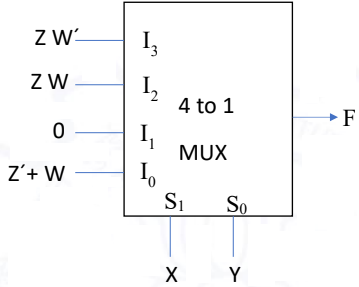 The canonical sum of product representation of F is

36. Given below is the diagram of a synchronous sequential circuit with one J-K flip-flop and one T flip-flop with their outputs denoted as A and B respectively, with JA = (Aʹ + Bʹ), KA = (A + B), and TB = A.

Starting from the initial state (AB = 00), the sequence of states (AB) visited by the circuit is

39. The figure below shows an electrically conductive bar of square cross-section resting on a plane surface. The bar of mass of 1 kg has a depth of 0.5 m along the y direction. The coefficient of friction between the bar and the surface is 0.1. Assume the acceleration due to gravity to be 10 m/s2. The system faces a uniform flux density B = −1 ẑ T. At time t = 0, a current of 10 A is switched onto the bar and is maintained.

When the bar has moved by 1 m, its speed in metre per second is ____ (rounded off to one decimal place).

41. An air cored coil having a winding resistance of 10 Ω is connected in series with a variable capacitor Cx. The series circuit is excited by a 10 V sinusoidal voltage source of angular frequency 1000 rad/s. As the value of the capacitor is varied, a maximum voltage of 30 V was observed across it. Neglecting skin-effect, the value of the inductance of the coil in millihenry is _____.

44. The input signal shown below

is passed through the filter with the following taps

The number of non-zero output samples is ____.

The amplitude of the steady state output is ____.

46. Consider a system with transfer-function 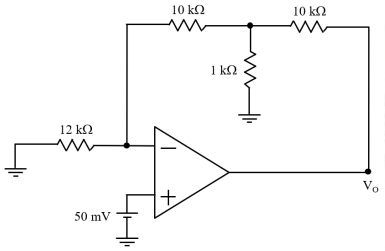 48. All the transistors used in the circuit are matched and have a current gain β of 20. Neglecting the Early effect, the current IO4 in milliampere is _____.

51. A bar primary current transformer of rating 1000/1 A, 5VA, UPF has 995 secondary turns. It exhibits zero ratio error and phase error of 30 minutes at 1000 A with rated burden. The watt loss component of the primary excitation current in ampere is __________ (rounded off to one decimal place).

53. For the full bridge made of linear strain gages with gage factor 2 as shown in the diagram, R1 = R2 = R3 = R4 = 100 Ω at 0°C and strain is 0. The temperature coefficient of resistance of the strain gages used is 0.005 per ° All strain gages are made of same material and exposed to same temperature. While measuring a strain of 0.01 at a temperature of 50 °C, the output VO in millivolt is _____ (rounded off to two decimal places).

54. A signal having a bandwidth of 5 MHz is transmitted using the Pulse code modulation (PCM) scheme as follows. The signal is sampled at a rate of 50% above the Nyquist rate and quantized into 256 levels. The binary pulse rate of the PCM signal in Mbits per second is ___.

55. In the figure shown, a large multimode fiber with ncore = 1. 5 and nclad = 1. 2 is used for sensing. A portion with the cladding removed passes through a liquid with refractive index nliquid. An LED is used to illuminate the fiber from one end and a paper is placed on the other end, 1 cm from the end of the fiber. The paper shows a spot with radius 1 cm. The refractive index nliquid of the liquid (rounded off to two decimal places) is ________.