(i) The number of candidates who appear for the GATE examination is staggering.

(ii) A number of candidates from my class are appearing for the GATE examination.

(iii) The number of candidates who appear for the GATE examination are staggering.

(iv) A number of candidates from my class is appearing for the GATE examination.

3. A digital watch X beeps every 30 seconds while watch Y beeps every 32 seconds. They beeped together at 10 AM.

5. The front door of Mr. X’s house faces East. Mr. X leaves the house, walking 50 m straight from the back door that is situated directly opposite to the front door. He then turns to his right, walks for another 50 m and stops. The direction of the point Mr. X is now located at with respect to the starting point is ______

6. Given below are two statements 1 and 2, and two conclusions I and II.

Statement 1: All entrepreneurs are wealthy.

Statement 2: All wealthy are risk seekers.

Conclusion I: All risk seekers are wealthy.

Conclusion II: Only some entrepreneurs are risk seekers.

Based on the above statements and conclusions, which one of the following options is CORRECT?

(B)  Only conclusion II is correct

(C)  Neither conclusion I nor II is correct

(D)  Both conclusions I and II are correct 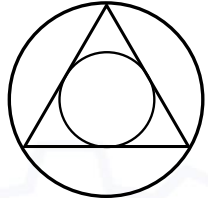 10. The world is going through the worst pandemic in the past hundred years. The air travel industry is facing a crisis, as the resulting quarantine requirement for travelers led to weak demand.

In relation to the first sentence above, what does the second sentence do?

(A)  Restates an idea from the first sentence.

(C)  The two statements are unrelated.

(D)  States an effect of the first sentence.

2. If the Laplace transform of a function f(t) is given by

3. The mean and variance, respectively, of a binomial distribution for n independent trials with the probability of success as p, are

4. The Cast Iron which possesses all the carbon in the combined form as cementite is known as

5. The size distribution of the powder particles used in Powder Metallurgy process can be determined by

6. In a CNC machine tool, the function of an interpolator is to generate

(A)  signal for the lubrication pump during machining

(B)  error signal for tool radius compensation during machining

(C)  NC code from the part drawing during post processing

7. The machining process that involves ablation is

9. The allowance provided in between a hole and a shaft is calculated from the difference between

11. For a two-dimensional, incompressible flow having velocity components u and v in the x and y directions, respectively, the expression

can be simplified to

12. Which of the following is responsible for eddy viscosity (or turbulent viscosity) in a turbulent boundary layer on a flat plate?

13. A two dimensional flow has velocities in x and y directions given by u = 2xyt and v = −y2t, where t denotes time. The equation for streamline passing through x = 1, y = 1 is 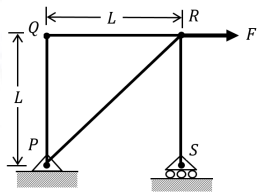 15. Consider the mechanism shown in the figure. There is rolling contact without slip between the disc and ground. 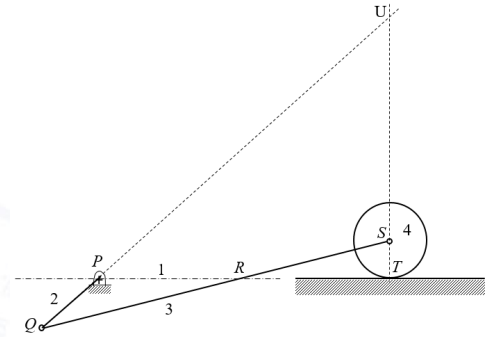 Select the correct statement about instantaneous centers in the mechanism.

(A)  Only points P, Q, and S are instantaneous centers of mechanism

(B)  Only points P, Q, S and T are instantaneous centers of mechanism

(C)  Only points P, Q, R, S, and U are instantaneous centers of mechanism

(D)  All points P, Q, R, S, T and U are instantaneous centers of mechanism

16. The controlling force curves P, Q and R for a spring controlled governor are shown in the figure, where r1 and r2 are any two radii of rotation.

The characteristics shown by the curves are

17. The von Mises stress at a point in a body subjected to forces is proportional to the square root of the

where x and r are n × 1 vectors and Q is a symmetric n × n matrix. The stationary point of f(x) is 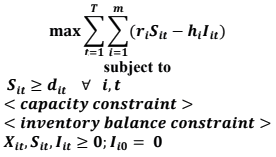 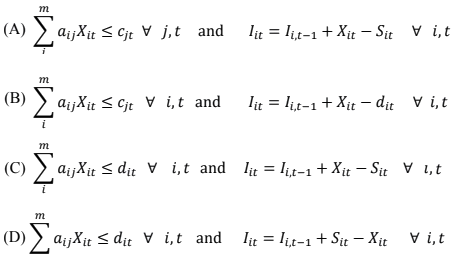 31. A plane frame PQR (fixed at P and free at R) is shown in the figure. Both members (PQ and QR) have length, L, and flexural rigidity, EI. Neglecting the effect of axial stress and transverse shear, the horizontal deflection at free end, R, is 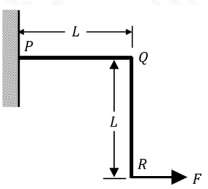 32. A power transmission mechanism consists of a belt drive and a gear train as shown in the figure. 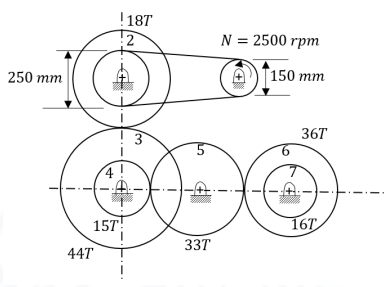 Diameters of pulleys of belt drive and number of teeth (T) on the gears 2 to 7 are indicated in the figure. The speed and direction of rotation of gear 7, respectively, are

33. A machine of mass 100 kg is subjected to an external harmonic force with a frequency of 40 rad/s. The designer decides to mount the machine on an isolator to reduce the force transmitted to the foundation. The isolator can be considered as a combination of stiffness (K) and damper (damping factor, ξ ) in parallel. The designer has the following four isolators:

Arrange the isolators in the ascending order of the force transmitted to the foundation.

34. Consider the system shown in the figure. A rope goes over a pulley. A mass, m, is hanging from the rope. A spring of stiffness, k, is attached at one end of the rope. Assume rope is inextensible, massless and there is no slip between pulley and rope. 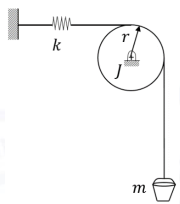 The pulley radius is r and its mass moment of inertia is J. Assume that the mass is vibrating harmonically about its static equilibrium position. The natural frequency of the system is

36. Daily production capacity of a bearing manufacturing company is 30000 bearings. The daily demand of the bearing is 15000. The holding cost per year of keeping a bearing in the inventory is ₹ 20. The setup cost for the production of a batch is ₹ 1800. Assuming 300 working days in a year, the economic batch quantity in number of bearings is ______________ (in integer).

38. A spot welding operation performed on two pieces of steel yielded a nugget with a diameter of 5 mm and a thickness of 1 mm. The welding time was 0.1 s. The melting energy for the steel is 20 J/mm3. Assuming the heat conversion efficiency as 10%, the power required for performing the spot welding operation is ____________ kW (round off to two decimal places).

39. A surface grinding operation has been performed on a Cast Iron plate having dimensions 300 mm (length) × 10 mm (width) × 50 mm (height). The grinding was performed using an alumina wheel having a wheel diameter of 150 mm and wheel width of 12 mm. The grinding velocity used is 40 m/s, table speed is 5 m/min, depth of cut per pass is 50 μm and the number of grinding passes is 20. The average tangential and average normal force for each pass is found to be 40 N and 60 N respectively. The value of the specific grinding energy under the aforesaid grinding conditions is ______________ J/mm3 (round off to one decimal place).

43. The demand and forecast of an item for five months are given in the table.

44. A shell and tube heat exchanger is used as a steam condenser. Coolant water enters the tube at 300 K at a rate of 100 kg/s. The overall heat transfer coefficient is 1500 W/m2.K, and total heat transfer area is 400 m2. Steam condenses at a saturation temperature of 350 K. Assume that the specific heat of coolant water is 4000 J/kg.K. The temperature of the coolant water coming out of the condenser is _________ K (round off to the nearest integer). 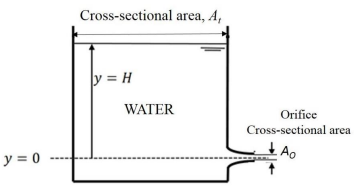 47. Consider the open feed water heater (FWH) shown in the figure given below: 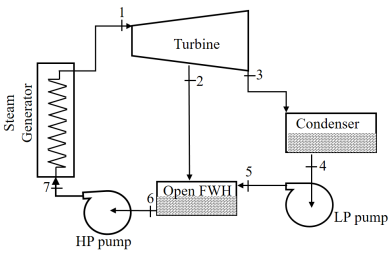 Assume constant specific heat of air is 1005 J/kg.K and gas constant is 287 J/kg.K. There is no work transfer across the boundary of this device. The rate of entropy generation is __________ kW/K (round off to one decimal place).

51. A block of negligible mass rests on a surface that is inclined at 30° to the horizontal plane as shown in the figure. When a vertical force of 900 N and a horizontal force of 750 N are applied, the block is just about to slide. 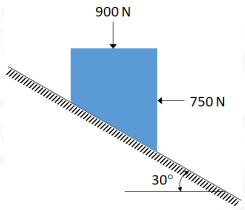 The coefficient of static friction between the block and surface is _______ (round off to two decimal places).

52. The wheels and axle system lying on a rough surface is shown in the figure. 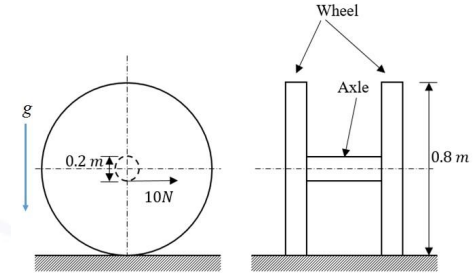 Each wheel has diameter 0.8 m and mass 1 kg. Assume that the mass of the wheel is concentrated at rim and neglect the mass of the spokes. The diameter of axle is 0.2 m and its mass is 1.5 kg. Neglect the moment of inertia of the axle and assume g = 9.8 m/s2. An effort of 10 N is applied on the axle in the horizontal direction shown at mid span of the axle. Assume that the wheels move on a horizontal surface without slip. The acceleration of the wheel axle system in horizontal direction is _________ m/s2 (round off to one decimal place).

53. A cantilever beam with a uniform flexural rigidity (EI = 200 × 106 N.m2) is loaded with a concentrated force at its free end. The area of the bending moment diagram corresponding to the full length of the beam is 10000 N.m2. The magnitude of the slope of the beam at its free end is _________ micro radian (round off to the nearest integer).

54. The torque provided by an engine is given by T(θ) = 12000 + 2500 sin(2θ) N.m, where θ is the angle turned by the crank from inner dead center. The mean speed of the engine is 200 rpm and it drives a machine that provides a constant resisting torque. If variation of the speed from the mean speed is not to exceed ±0.5%, the minimum mass moment of inertia of the flywheel should be ___________ kg.m2 (round off to the nearest integer). 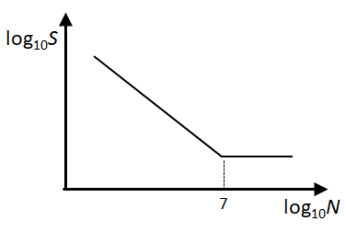 The life of a cylindrical shaft made of this material subjected to an alternating stress of 200 MPa will then be __________ cycles (round off to the nearest integer).