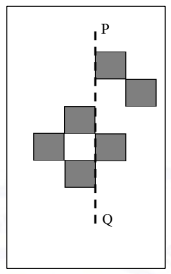 (A)  Only conclusion I is correct.

(B)  Only conclusion II is correct.

(C)  Either conclusion I or II is correct.

(D)  Both conclusion I and II are correct. 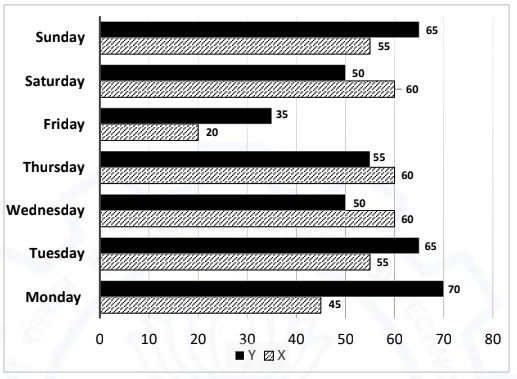 1. MOPU (in the context of offshore drilling and production systems) stands for

2. Which ONE of the following statements is INCORRECT?

(A)  Conductor is the outer casing of a well

(B)  Riser is used for transporting fluid

(C)  Conductor and riser have the same functions

3. Which ONE of the following offshore installations uses Dynamic Positioning System (DPS) for station keeping?

4. Which ONE of the following is NOT a primary safety system for offshore installations?

(A)  Emergency Shut Down

5. The primary function of the thruster in the Dynamic Positioning System (DPS) of an offshore installation is

(C)  To apply thrust in the direction opposite to the motion

(D)  To apply thrust in the same direction as the motion

6. Select the CORRECT firefighting system for electrical switchgear room in an offshore facility.

7. Which ONE of the following options can be used to quantify secondary porosity?

(A)  Sonic and Gamma Ray Logs

(B)  Sonic and Neutron Logs

8. Among the options given below, what is the typical temperature range for significant oil generation in a source rock associated with conventional crude-oil reservoirs?

9. In the original Darcy’s law as proposed by Henry Darcy, which of the following drives the fluid flow through a fully saturated sand column?

(B)  Viscous force per unit volume

10. At which ONE of the following scales is Darcy’s law for fluid flow through a porous medium applicable?

11. Pressure – Temperature phase diagram of CO2 is shown below. Identify the correct phases from the given options. 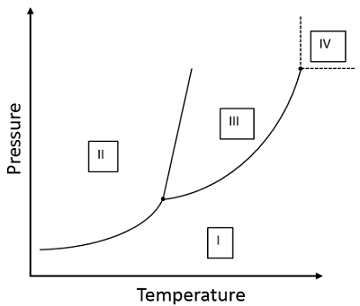 12. A measure of the potential of crude oil to form surfactants for Enhanced Oil Recovery (EOR) is given by the Total Acid Number (TAN). TAN is the mass of _________ (in milligrams) that is required to neutralize one gram of crude oil.

14. Solids that may possibly form in the offshore pipelines during the production of oil and gas from deep-water reservoirs are

15. Oil and gas pipelines, which are at an elevated pressure (about 3 MPa) and sub-ambient temperature (below 298 K), may get blocked by the formation of solid hydrates. One of the strategies adopted to inhibit the formation of hydrates is the injection of Thermodynamic Hydrate Inhibitors (THIs) into the reservoir fluid.

Identify all suitable chemicals that are commonly used as THIs.

16. When CO2 and liquid water are brought in contact with each other, they may form solid hydrates. The three-phase hydrate boundary is shown in the Pressure -Temperature plot given below. 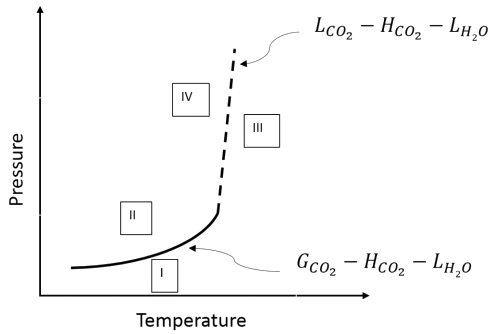 (A)  Hydrates are stable in region I

(B)  Hydrates are stable in region II

17. Heavy oil recovered from reservoirs can be represented by CXH5X. Suitable processes to reduce the density of heavy oil are

18. Identify the CORRECT statements for a n × n matrix.

(A)  Under elementary row operations, the rank of the matrix remains invariant

(B)  Under elementary row operations, the eigenvalues of the matrix remain the same

(C)  If the elements in a row can be written as a linear combination of two or more rows, then the matrix is singular.

19. During a drilling operation, kick occurs if

(A)  the shear ram in the Blow Out Preventer (BOP) does not work.

(B)  the formation pressure is equal to the drilling fluid pressure.

(C)  the volume of the mud used to fill the hole is less than that of the pipe being pulled out.

(D)  the formation pressure is more than the drilling fluid pressure.

22. The number of ‘three-digit numbers’ that can be formed using the digits from 1 to 9 without the repetition of each digit is ________.

24. A saturated oil reservoir has an average reservoir pressure of 3000 psia tested for flowing bottom-hole pressure (BHP) of 2000 psia and production rate of 500 STB/day. The maximum reservoir deliverability based on Vogel’s equation for two-phase flow is ________ STB/day.

25. If the specific heat ratio of natural gas is 1.28, the critical pressure ratio (ratio of outlet pressure to upstream pressure) through a choke is ________ (round off to two decimal places).

26. Match the suitable artificial lift methods (GROUP I) to meet the requirements (GROUP II) given in the table.

28. Identify the following well test methods corresponding to the transient pressure profiles in the figures given below. (BHP: Bottom-hole pressure, BOPD: Barrels of oil per day) 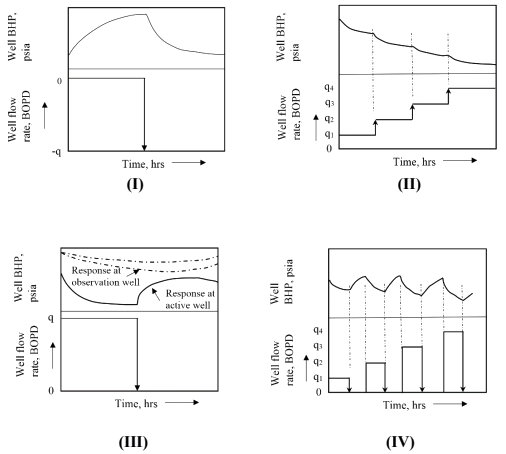 29. Match the following wire-line logging methods (GROUP I) based on the physical principles of measurements (GROUP II).

30. Match the following rock types (GROUP I) with their respective chemical compositions (GROUP II) from the given options. 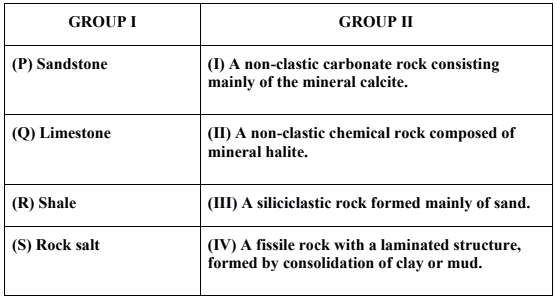 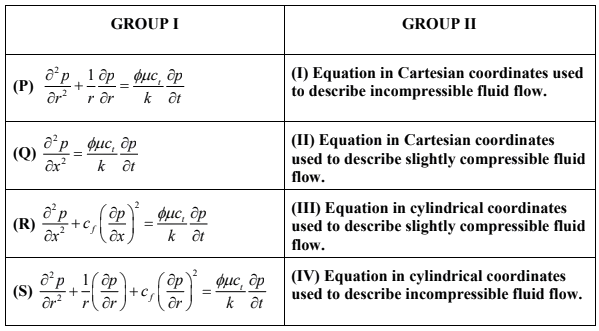 (A)  Alkaline flooding recovers crude oil by reduction of interfacial tension (IFT) and reversal of wettability of rocks.

(B)  In-situ combustion recovers crude oil by the application of heat, thus lowering the viscosity of the crude oil.

(D)  Polymer flooding recovers crude oil by reducing the viscosity and increasing the mobility of water. 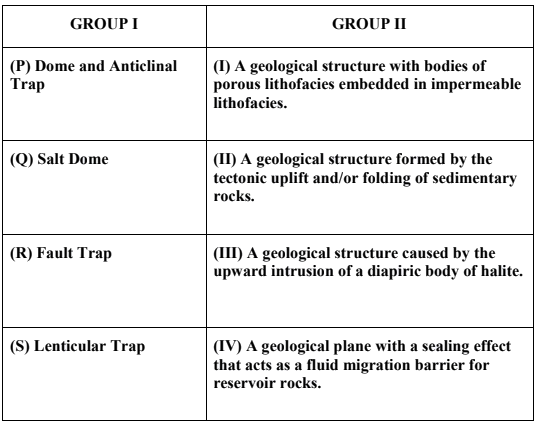 34. An Ideal Pressure Buildup Test yields a single straight line for all times, when shut-in Bottom-Hole Pressure (Pws) is plotted against

. Here tp is the well production time and Δt is the time elapsed since shut-in. However, in an actual Pressure Buildup Test, a non-linear curve is obtained which can be logically divided into distinct regions.

Choose the INCORRECT option from the following.

(A)  A late-time region, in which the radius of investigation has reached the well’s drainage boundaries.

(B)  A middle-time region during which the pressure transient has moved away from the wellbore and into the bulk formation.

(C)  An early-time region during which a pressure transient is moving through the formation nearest the wellbore.

(D)  An early-time region during which a pressure transient is moving away from the drainage boundary.

35. When two immiscible fluid phases are placed in contact with a solid surface, one phase usually is attracted to solid more strongly than the other phase. The more strongly attracted phase is called the ‘wetting phase’.

36. Coal bed methane is methane gas adsorbed in coal seams. To desorb the methane from the coal seam it should be exposed to CO2 and (or) N2. Which ONE of the following is an appropriate reason to enhance the desorption process?

38. Select the CORRECT statements from the following.

(A)  do not measure rock and fluid properties of the reservoir when the well is flowing or shut-in.

(B)  measure variation in pressure response of the reservoir with time when the well is flowing or shut-in.

(D)  do not measure length and conductivity of hydraulic fractures.

39. Crude oil from oil sands contains bitumen and asphaltene and this crude is heavy and viscous at room temperature. Assume that one such crude oil is represented by CXH2XOY. For easier transportation through pipelines it should be processed further. Identify the processes which help in transportation of this crude oil.

The eigenvalue corresponding to the eigenvector

44. A productivity test conducted on a crude oil well indicates a stabilized flow rate of 150 STB/day (water-free oil production) at a bottom-hole flowing pressure of 935 psig. After shutting the well for 24 hours, the bottom-hole pressure reached a static value of 1250 psig.

45. A porous medium (shown schematically in the figure) has the following properties.

An incompressible fluid having a viscosity of 2 cP is flowing through a porous medium at the inlet and exit pressures of 7 × 106 Pa and 6 × 106 Pa, respectively.

47. A cylindrical crude oil reservoir with a radius of 3000 ft is under water influx from a cylindrical aquifer with an estimated radius of 9000 ft. The reservoir has the following properties.

Assuming a pot reservoir model with fractional encroachment angle as unity, the water influx into the reservoir for a pressure drop of 700 psi is ________ MMbbl (million barrels) (round off to two decimal places).

48. A heavy oil reservoir with an initial oil recovery of 10% has the following properties.

An in-situ combustion test was conducted in the above reservoir. Oil recovery due to the combustion process at the well is observed to be 12000 bbl.

The total (overall) oil recovery at the end of the in-situ combustion process is __________% (round off to nearest integer) of the original oil in place.

50. The fluid flow through an under-saturated oil reservoir is driven by solution gas drive mechanism. The reservoir parameters are as given below.

The percentage of oil recovered as a fraction of the Original Oil in Place (OOIP) is ________% (round off to one decimal place).

where pe is effective pressure, pwf is flowing bottom-hole pressure, q is flow-rate, μ is viscosity, ke is average effective permeability, h is reservoir thickness, re is drainage radius, rw is wellbore radius and S is skin factor.

52. A depleted and shut-in oil reservoir originally contained 25 × 106 STB of oil with a formation volume factor of 1.35 res bbl/STB and a connate water saturation of 0.25. Cumulative oil production to date has been 2. 5 × 106 STB of oil. The oil formation volume factor is now 1.25 res bbl/STB. Assuming no water influx, the gas saturation in the reservoir is ___________ %(round off to one decimal place).

53. Surface tension of liquid A in a capillary is being measured in the laboratory using capillary rise (refer the figure given below). The capillary radius (r) is 100 μm, the height of liquid column (h) is 10 cm and Ө = 38°. Density of air can be neglected. Assume liquid A to have the same density as water.

Surface tension of liquid A at room temperature is ___________dynes/cm (round off to one decimal place). 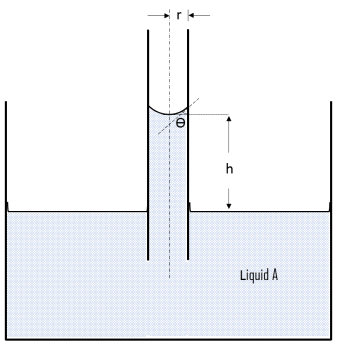 54. Miscible displacement process is one of the EOR techniques. The performance of this process depends on fluid physical properties that affect flow behavior in a reservoir. Two of the important properties are density and viscosity. Consider the use of CO2 for one such process. The density of CO2 at the reservoir condition is ____________ lb/ft3 (round off to one decimal place).

Relevant data for this calculation are given below.

Values of Universal Gas Constant (R) in different units are listed below.