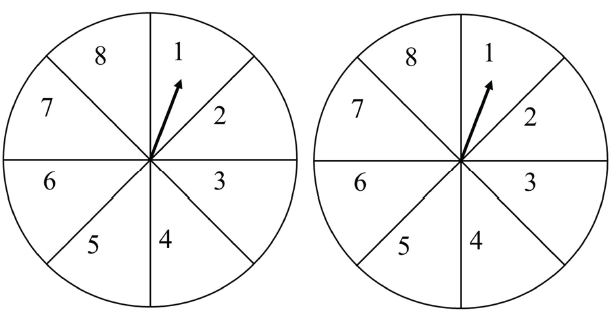 (A)  its columns and rows are interchanged

(B)  two parallel lines are identical

13. Function f(x) by Maclaurin’s series (as an infinite series) can be expressed as 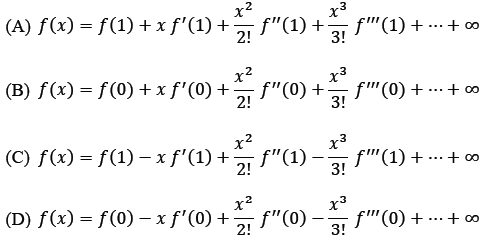 16. Annual cost of owning (fixed cost) a particular combine harvester is Rs. 3,00,000 whereas, operating it would cost additional Rs. 6,000 per hectare. If an entrepreneur wishes to offer the machine for custom hiring, the combination of annual use (ha) and custom rate (Rs. ha−1), respectively, that would fetch him the break-even condition is ______.

17. In construction of gravel packed wells, the pack-aquifer ratio is generally defined as ______.

(A)  basin and storm characteristics

(B)  storm characteristics only

(D)  direction of the rainfall only

19. Energy requirement (E) to produce a change (dX) in dimension X of a particular size can be expressed as

23. A single cylinder four-stroke diesel engine has an engine displacement volume of9 L, the engine rotates at 2400 rpm and its volumetric efficiency is 88%. The actual air inducted into the cylinder in m3 s−1 is _________. [round off to three decimal places]

25. A double acting hydraulic cylinder has bore and rod diameter of 76 mm and 25 mm,respectively. In extension as well as retraction strokes of the cylinder, the oil flow rate to the cylinder from the pump is 40 L min−1. The velocity of the piston during retraction stroke in m s−1 [round off to two decimal places]

26. An open V-belt is wrapped around V-pulleys having effective diameters of 0.25 m and 0.65 m, and their centres are 1 m apart. Assuming ideal conditions, the wrap angle in degree for the smaller pulley is __________. [round off to two decimal places]

27. Water from a confined aquifer having transmissivity of 1000 m2 day−1 is pumped through a fully penetrating well of 300 mm diameter at a rate of 1200 m3 day−1. If the radius of influence is 400 m, the draw down in the well under steady-state flow condition in meter is ________. [round off to two decimal places]

30. The ratio of soil loss from the field plot length to that from the unit plot with a slope length of 22.13 m is 0.5. If the slope length from the watershed divide is 600 m and the slope gradient is 8%, the topographic factor in the Universal Soil Loss Equation is __________. [round off to two decimal places]

31. The area of a rectangular field was measured using a 30 m survey chain, which was later found to be 5 cm short. If the length and width of the field measured using this chain were 542 m and 554 m,respectively, the true area of the field in ha is________. [round off to two decimal places]

is singular for the following values of x

38. A 5 × 20 cm seed drill has a ground drive wheel of rolling diameter 0.5 m. Whiletesting under laboratory condition, 320 gof seeds were collected in 20 revolutionsof the ground drive wheel. The same seeddrill when operated in a 2 ha field, amount

of seeds dropped was found to be 185 kg.The variation in the seed dropped betweenlaboratory and field conditions due to skidof ground drive wheel is ________

39. A 3.6 m combine harvester was tested over a crop strip of 20 m length and thefollowing data were obtained while testing:

The grain yield (tonne ha−1) and cylinder loss (%), respectively, are

42. A parabolic shaped grass-waterway is to be designed to carry a flow of 2.85 m3 s−1down the slope of 3%. The permissiblevelocity of water in the waterway is1.78 m s−1. If the freeboard depth is excluded, the most appropriate top width in mand depth in m, respectively are

44. The water activity of potato is 0.942. As per Raoult’s law, the most efficient solutionfor osmotic dehydration of potato is ________.

45. The mass fraction retained on the ith sieve is xi and

is the average opening size of ith and (i-1)th sieves. The volume surface mean diameter

46. Match the following reactants in Column I with the most appropriate purpose usedin processing as mentioned in Column II.

47. Work done by a moving particle in the force field

48. The power consumption readings (in watt) by an instrument at fixed intervals oftime (in seconds) are tabulated below:

Using Simpson’s 1/3rd rule, the energy expenditure of the instrument in joule is__________. [round off to two decimal places]

50. The static weight on front and rear axles of a two-wheel drive tractor are 3 kN and 9 kN, respectively. The wheel-base of the tractor is 2.1 m and the tractor pulls a load of 7.5 kN. The perpendicular distance from the front wheel ground contact point to the line of pull is 680 mm. Neglecting the wheel contact off-set on the ground, the weight transfer onto the rear axle in kN is _________. [round off to two decimal places]

51. The crank radius and connecting rod length of an IC engine are 250 mm and 1000 mm, respectively. If the crank turns 100º from the head dead centre and the net force acting on the piston along its direction of motion is 35 kN, the turning moment of the crank shaft at that instant in kN m is ___________. [round off to two decimal places]

53. A tractor operated 12 × 60 cm boom sprayer had an overlap of 30 cm between the successive passes during field operation at an average speed of 4.2 km h−1. A total time loss of 7.5 min ha−1 was observed during turnings. Assuming no overlap of spray material between adjacent nozzles, the field efficiency of the sprayer in percent is __________. [round off to two decimal places]

54. A mild steel flange-mounted single shear pin (Ultimate shear strength = 42 MPa)of 10 mm diameter is used in a flange. The perpendicular distance between the axis of driving shaft and the shear pin axis is 100 mm. If the speed of the driving shaft is 300 rpm, the maximum power the shaft could transmit in kW before the failure of the pin is ___________. [round off to two decimal places]

55. In a subsurface drainage network, 12 lateral drains each of 100 m long are laid at a spacing of 50 m. These lateral drains are connected to a collector drain. When the water table dropped 50 cm below the soil surface in 4 days, the average discharge at the outlet of the collector drain was found to be 12 L s−1. The average drain able porosity of soil in per cent is ________. [round off to two decimal places]

56. A watershed with various land uses (as specified in the table below) receives a rainfall of 152.4 mm. If an initial abstraction (Ia) is 0.2 times the potential maximum retention (S), and the antecedent moisture content (AMC) of averaged condition is assumed, the depth of runoff volume in mm is ____________. [round off to two decimal places]

58. The ordinates of an inflow hydrograph are provided in the table below. If the routing interval (Δt) is one hour, weighting factor in Muskingham equation (X) is 0.2, and the storage-time constant (time of travel of flood wave through the channel reach)(K) is 0.7 hour, using the Muskingham method of flood routing, the ordinate of the outflow (routed) hydrograph for 2nd hour in m3 s−1 is _______. [round off to two decimal places]

60. A falling ball viscometer is used to determine the dynamic viscosity of sunflower oil. The viscometer has a tube length of 10 cm with the ball diameter of 0.68 mm.The densities of oil and the ball are 921 kg m−3 and 2420 kg m−3, respectively. If the ball takes 44.5 s to fall from top of the tube, the viscosity of the oil in Pa s is________. [round off to three decimal places].

61. A cylindrical metallic silo of 3 m internal diameter and 10 m depth is loaded with maize grain having bulk density of 720 kg m−3. The angle of internal friction between the maize grains is 24°, and that between the grain and wall is 22°. Using Airy’s theory, the calculated lateral pressure in kPa at the bottom of the silo is_________. [round off to two decimal place]

63. Sweet sorghum with an initial average particle size of 4.0 mm was pulverized using a burr mill at two different gap settings between stones. The average feed rate of the material is 200 kg h−1. The resultant flour was analyzed by IS sieves for particle size determination and was found to be 0.336 mm and 0.306 mm for the first and second gap settings, respectively. Using Kick’s law, if the power required to grind the sorghum at first setting is 7.2 kW, the power requirement in kW with the second setting is ___________. [round off to two decimal places]

64. A walk-in deep freezer wall is made of 120 mm thick brick layer on the out side followed by 75 mm thick concrete and 50 mm thick cork layers inside. The mean temperatures measured over inside and outside wall surfaces are −18°C and 24 °C,respectively. The thermal conductivity of brick, concrete and cork are 0.69, 0.76 and 0.043 W m−1 K−1, respectively. Considering one square meter wall surface area,the heat transfer rate in W is ____________. [round off to one decimal place]

65. In an effort to conserve energy, a grain dryer is being modified to reuse a part (10 m3 s−1) of the exhaust airflow at 70 ºC and 30% relative humidity. This part of exhaust is mixed with 20 m3 s−1 of ambient air at 30 ºC and 60 % relative humidity.The details of the two air-stream conditions are given below.

The absolute humidity of the mixed air will be __________. [round off to three decimal places]