11. The major product M formed in the following reaction is

12. The starting material Y in the following reaction is

13. The major product in the given reaction is Q. The mass spectrum of Q shows {[M] = molecular ion peak}

15. The major product M in the following reaction is

16. The major product T formed in the following reaction is

(D) the glass transition is observed as a sharp peak

18. The vO−O resonance Raman stretching frequency (cm−1) of the coordinated dioxygen in oxy-hemoglobin and oxy-hemocyanin appears, respectively, nearly at

20. 1sA and 1sB are the normalized eigenfunctions of two hydrogen atoms HA and HB, respectively. If 𝑆 = ⟨1sA|1sB⟩, the option that is ALWAYS CORRECT is

21. The pure vibrational spectrum of a hypothetical diatomic molecule shows three peaks with the following intensity at three different temperatures.

The CORRECT statement is

(A) Peak I appears at the lowest energy

(B) Peak II appears at the lowest energy

(D) Peak I appears at the highest energy

24. Adsorption of a gas with pressure P on a solid obeys the Langmuir adsorption isotherm. For a fixed fractional coverage, the correct relation between K and P at a fixed temperature is

25. The temperature dependence of the rate constant for a second-order chemical reaction obeys the Arrhenius equation. The SI unit of the ‘pre-exponential factor’ is

26. The CORRECT reagent(s) for the given reaction is(are)

27. The CORRECT statement(s) about the 1H NMR spectra of compounds P and Q is (are)

(D) Both TlBr and TlCl have CsCl structure

29. The CORRECT statement(s) about the spectral line broadening in atomic spectra is(are)

(A) The collision between atoms causes broadening of the spectral line

(B) Shorter the lifetime of the excited state, the broader is the line width

30. Match the CORRECT option(s) from column A with column B according to the metal centre present in the active site of metalloenzyme.

31. The CORRECT statement(s) about the following phase diagram for a hypothetical pure substance X is(are)

(B) X does not have a normal boiling point

(C) The melting point of X decreases with increase in pressure

(D) On increasing the pressure of the gas isothermally, it is impossible to reach solid phase before reaching liquid phase

32. The parameter(s) fixed for each system in a canonical ensemble is(are)

33. The number of peaks exhibited by T in its broadband proton decoupled 13C NMR spectrum recorded at 25°C in CDCl3 is

35. For the angular momentum operator

36. The major product P obtained in the following reaction sequence is

37. The major product Q in the given reaction is

38. The major product P in the following reaction is

39. The major product P in the reaction sequence is

40. The major products P and Q in the following reaction sequence are

41. The major products M and N in the given reaction sequence are

42. Three different crystallographic planes of a unit cell of a metal are given below(solid circles represent atom). The crystal system of the unit cell is

43. The number of equivalents of H2S gas released from the active site of rubredoxin,2-iron ferredoxin, and 4-iron ferredoxin when treated with mineral acid, respectively, are

44. The number of vS = O stretching vibration band(s) observed in the IR spectrum of the high-spin [Mn(dmso)6]3+ complex (dmso: dimethylsulfoxide) is

46. The CORRECT distribution of the products in the following reaction is 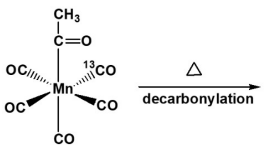 48. The electronic spectrum of a Ni(II) octahedral complex shows four d-d bands, labelled as P, Q, R, and S. Match the bands corresponding to the transitions. 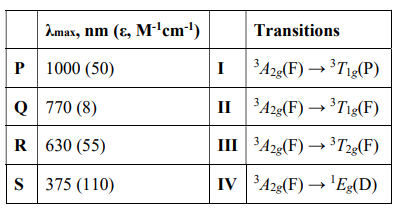 49. In the following table, the left column represents the rigid-rotor type and the right column shows a set of molecules.

The CORRECT match is

50. The CORRECT statement regarding the following three normal modes of vibration of SO3 is

51. The reaction(s) that yield(s) 3-phenylcyclopentanone as the major product is(are) 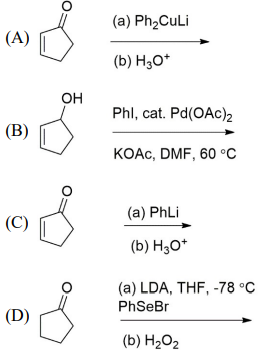 52. The reaction(s) that yield(s) M as the major product is(are)

54. The CORRECT statement(s) about the Group-I metals is(are)

(B) Among the Group-I metals, Li spontaneously reacts with N2 to give a red-brown layer-structured material

55. The compound(s) that satisfies/satisfy the 18-electron rule is(are)

57. The difference between the number of Gauche-butane interactions present in P and Q is

58. The calculated magnetic moment (in BM, rounded off to two decimal places) of aCe3+ complex is

59. The state of the electron in a He+ ion is described by the following normalized wave function,

Here, Rnl and Ylm represent the radial and angular components of the eigenfunctions of He+ ion, respectively, and x is an unknown constant. If the energy of the ion is measured in the above state, the probability (rounded off to two decimal places) of obtaining the energy of−2/9 atomic unit is

60. A certain wavefunction for the hydrogen-like atom is given by

The number of node(s) in this wave function is

61. EMF of the following cell

[Given: Standard electrode potential values at 25 °C for

62. The radius of gyration (in nm, rounded off to one decimal place), for three dimensional random coil linear polyethylene of molecular weight 8,40,000 is

64. In a collection of molecules, each molecule has two non-degenerate energy levels that are separated by 5000 cm−1. On measuring the population at a particular temperature, it was found that the ground state population is 10 times that of the upper state. The temperature (in K, rounded off to the nearest integer) of measurement is