What is the distance between P and Q (in m) when P wins the race?

4. Given below are two statements and four conclusions drawn based on the statements.

Statement 1: Some bottles are cups.

Statement 2: All cups are knives.

Conclusion I: Some bottles are knives.

Conclusion II: Some knives are cups.

Conclusion III: All cups are bottles.

Conclusion IV: All knives are cups.

5. The figure below shows the front and rear view of a disc, which is shaded with identical patterns. The disc is flipped once with respect to any one of the fixed axes 1-1, 2-2 or 3-3 chosen uniformly at random.

What is the probability that the disc DOES NOT retain the same front and rear views after the flipping operation?

6. Altruism is the human concern for the well being of others. Altruism has been shown to be motivated more by social bonding, familiarity and identification of belongingness to a group. The notion that altruism may be attributed to empathy or guilt has now been rejected.

(A) Humans engage in altruism due to guilt but not empathy

(B) Humans engage in altruism due to empathy but not guilt

(D) Humans engage in altruism due to empathy but not familiarity

The two dice are thrown once independently at random.

What is the probability that the outcomes on the dice were composed only ofany combination of the following possible outcomes: Q, U and V?

What is the price of the item at the online store S (in Rs.) if there are no other charges than what is described above?

9. The letters P, Q, R, S, T and U are to be placed one per vertex on a regular convex hexagon, but not necessarily in the same order.

Based on the above statements, which one of the following options is CORRECT?

Which one of the following is a part of a possible trajectory of the ant during the movement?

where A, B, C and D are positive constants. This system cannot operate as

12. For an ideal MOSFET biased in saturation, the magnitude of the small signal current gain for a common drain amplifier is

13. The most commonly used relay, for the protection of an alternator against loss of excitation, is

(B) over current relay.

14. The geometric mean radius of a conductor, having four equal strands with each strand of radius ‘r’, as shown in the figure below, is

15. The valid positive, negative and zero sequence impedances (in p.u.), respectively, for a 220 kV, fully transposed three-phase transmission line, from the given choices are

16. The steady state output (Vout), of the circuit shown below, will 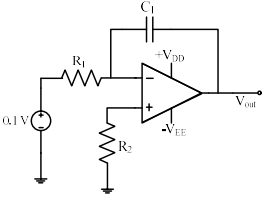 (A) saturate to +VDD

(B) saturate to −VEE

17. The Bode magnitude plot of a first order stable system is constant with frequency. The asymptotic value of the high frequency phase, for the system, is −180°. This system has

(A) one LHP pole and one RHP zero at the same frequency.

(B) one LHP pole and one LHP zero at the same frequency.

18. A balanced Wheatstone bridge ABCD has the following arm resistances:

19. The open loop transfer function of a unity gain negative feedback system is given by

The range of k for which the system is stable, is

21. In the circuit shown below, a three-phase star-connected unbalanced load is connected to a balanced three-phase supply of 100√3 V with phase sequence ABC. The star connected load has ZA = 10 Ω and ZB = 20∠60°Ω. The value of ZC in Ω, for which the voltage difference across the nodes n and n’ is zero, is

22. A charger supplies 100 W at 20 V for charging the battery of a laptop. The power devices, used in the converter inside the charger, operate at a switching frequency of 200 kHz. Which power device is best suited for this purpose?

23. A long conducting cylinder having a radius ‘b’ is placed along the z axis. The current density is

for the region r < b where r is the distance in the radial direction. The magnetic field intensity (H) for the region inside the conductor (i.e. for r < b) is

24. The type of single-phase induction motor, expected to have the maximum power factor during steady state running condition, is

25. For the circuit shown below with ideal diodes, the output will be

29. The maximum clock frequency in MHz of a 4-stage ripple counter, utilizing flip-flops, with each flip-flop having a propagation delay of 20 ns, is ___________. (round off to one decimal place) 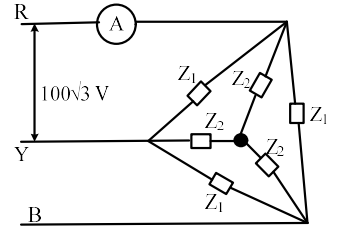 35. The frequencies of the stator and rotor currents flowing in a three-phase 8-pole induction motor are 40 Hz and 1 Hz, respectively. The motor speed, in rpm, is _______. (round off to nearest integer)

36. The output impedance of a non-ideal operational amplifier is denoted by Zout. The variation in the magnitude of Zout with increasing frequency, f, in the circuit shown below, is best represented by

37. An LTI system is shown in the figure where

The steady state output of the system, to the input r(t), is given as

38. The open loop transfer function of a unity gain negative feedback system is given as

The Nyquist contour in the s-plane encloses the entire right half plane and a small neighbourhood around the origin in the left half plane, as shown in the figure below.The number of encirclements of the point (−1 + j0) by the Nyquist plot of G(s),corresponding to the Nyquist contour, is denoted as N. Then N equals to 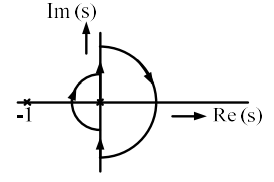 39. The damping ratio and undamped natural frequency of a closed loop system as shown in the figure, are denoted as ζ and ωn, respectively. The values of ζ and ωn are

40. eA denotes the exponential of a square matrix A. Suppose 𝜆 is an eigenvalue and v is the corresponding eigen-vector of matrix A.

Statement 1 :eλ is an eigenvalue of eA.

Statement 2: v is an eigen-vector of eA.

(A) Statement 1 is true and statement 2 is false.

(B) Statement 1 is false and statement 2 is true.

(C) Both the statements are correct.

(D) Both the statements are false.

Then f(x) decreases in the interval

The matrix A satisfies the equation 6A−1 = A2 + cA + dI, where c and d are scalars and I is the identity matrix.

43. The fuel cost functions in rupees/hour for two 600 MW thermal power plants are given by

44. The current gain (Iout/Iin) in the circuit with an ideal current amplifier given below is 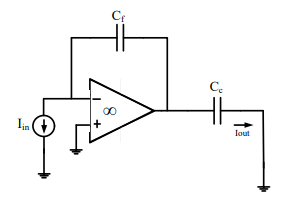 45. If the magnetic field intensity (H) in a conducting region is given by the expression,

46. Let a causal LTI system be governed by the following differential equation

where x(t) and y(t) are the input and output respectively. Its impulse response is

The output of the system is

48. Consider the system as shown below

(A) linear and causal.

(B) linear and non-causal.

49. The discrete time Fourier series representation of a signal x[n] with period N is written as

A discrete time periodic signal with period N = 3, has the non-zero Fourier series coefficients: a−3 = 2 and a4 = 1. The signal is

51. Let R be a region in the first quadrant of the xy plane enclosed by a closed curve C considered in counter-clockwise direction. Which of the following expressions does not represent the area of the region R?

53. As shown in the figure below, two concentric conducting spherical shells, centered at r = 0 and having radii r = c and r = d are maintained at potentials such that the potential V(r) at r = c is V1 and V(r) at r = d is V2. Assume that V(r) depends only on r, where r is the radial distance. The expression for V(r) in the region between r = c and r = d is 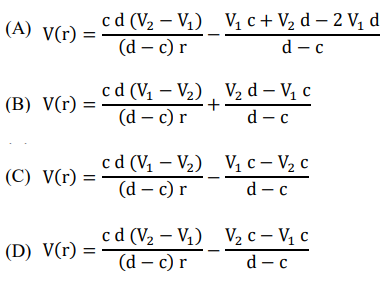 54. Let the probability density function of a random variable x be given as f(x) = ae−2|x|

55. In the circuit shown below, the magnitude of the voltage V1 in volts, across the 8 kΩ resistor is  ______. (round off to nearest integer)

56. Two generating units rated for 250 MW and 400 MW have governor speed regulations of 6% and 6.4%, respectively, from no load to full load. Both the generating units are operating in parallel to share a load of 500 MW. Assuming free governor action, the load shared in MW, by the 250 MW generating unit is_________. (round off to nearest integer)

57. A 20 MVA, 11.2 kV, 4-pole, 50 Hz alternator has an inertia constant of 15 MJ/MVA. If the input and output powers of the alternator are 15 MW and 10 MW, respectively, the angular acceleration in mechanical degree/s2 (round off to nearest integer)

58. Consider an ideal full-bridge single-phase DC-AC inverter with a DC bus voltage magnitude of 1000 V. The inverter output voltage v(t) shown below, is obtained when diagonal switches of the inverter are switched with 50 % duty cycle. The inverter feeds a load with a sinusoidal current given by,

59. For the ideal AC-DC rectifier circuit shown in the figure below, the load current magnitude is Idc = 15 A and is ripple free. The thyristors are fired with a delay angle of 45°. The amplitude of the fundamental component of the source current, in amperes, is ________. (round off to two decimal places) 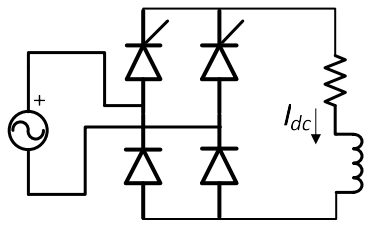 60. A 3-phase grid-connected voltage source converter with DC link voltage of 1000 V is switched using sinusoidal Pulse Width Modulation (PWM) technique. If the grid phase current is 10 A and the 3-phase complex power supplied by the converter is given by (−4000 − j3000) VA, then the modulation index used in sinusoidal PWM is ________. (round off to two decimal places)

61. The steady state current flowing through the inductor of a DC-DC buck boost converter is given in the figure below. If the peak-to-peak ripple in the output voltage of the converter is 1 V,  then the value of the output capacitor, in µF, is ________. (round off to nearest integer)

62. A 280 V, separately excited DC motor with armature resistance of 1 Ω and constant field excitation drives a load. The load torque is proportional to the speed. The motor draws a current of 30 A when running at a speed of 1000 rpm. Neglect frictional losses in the motor. The speed, in rpm, at which the motor will run, if an additional resistance of value 10 Ω is connected in series with the armature, is ________. (round off to nearest integer)

63. A 4-pole induction motor with inertia of 0.1 kg-m2 drives a constant load torque of 2 Nm. The speed of the motor is increased linearly from 1000 rpm to 1500 rpm in 4 seconds as shown in the figure below. Neglect losses in the motor. The energy, in joules, consumed by the motor during the speed change is ________. (round off to nearest integer)

64. A star-connected 3-phase, 400 V, 50 kVA, 50 Hz synchronous motor has asynchronous reactance of 1 ohm per phase with negligible armature resistance. The shaft load on the motor is 10 kW while the power factor is 0.8 leading. The loss in the motor is 2 kW. The magnitude of the per phase excitation emf of the motor, in volts, is _______. (round off to nearest integer).