3. A trapezium has vertices marked as P, Q, R and S (in that order anticlockwise). The side PQ is parallel to side SR.

What is the shortest distance between PQ and SR (in cm)?

4. The figure shows a grid formed by a collection of unit squares. The unshaded unit square in the grid represents a hole. 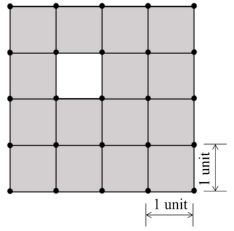 What is the maximum number of squares without a “hole in the interior” that can be formed within the 4 × 4 grid using the unit squares as building blocks?

If the security guard does not move around the posted location and has a 360o view, which one of the following correctly represents the set of ALL possible locations among the locations P, Q, R and S, where the security guard can be posted to watch over the entire inner space of the gallery.

6. Mosquitoes pose a threat to human health. Controlling mosquitoes using chemicals may have undesired consequences. In Florida, authorities have used genetically modified mosquitoes to control the overall mosquito population. It remains to be seen if this novel approach has unforeseen consequences.

Which one of the following is the correct logical inference based on the information in the above passage?

What is the area enclosed by the quadrilateral?

9. In a class of five students P, Q, R, S and T, only one student is known to have copied in the exam. The disciplinary committee has investigated the situation and recorded the statements from the students as given below.

Statement of P: R has copied in the exam.

Statement of Q: S has copied in the exam.

Statement of R: P did not copy in the exam.

Statement of S: Only one of us is telling the truth.

Statement of T: R is telling the truth.

The investigating team had authentic information that S never lies.

Based on the information given above, the person who has copied in the exam is

10. Consider the following square with the four corners and the center marked as P, Q, R, S and T respectively.

X: rotation of the square by 180 degree with respect to the

Y: rotation of the square by 180 degree with respect to the P-R axis.

Z: rotation of the square by 90 degree clockwise with respect to the axis perpendicular, going into the screen and passing through the point T.

Consider the following three distinct sequences of operation (which are applied

in the left to right order).

Which one of the following statements is correct as per the information provided above?

(A) The sequence of operations (1) and (2) are equivalent

(B) The sequence of operations (1) and (3) are equivalent

(C) The sequence of operations (2) and (3) are equivalent

12. A velocity field in Cartesian coordinate system is expressed as

13. The constant term of the Fourier coefficients of the periodic function

14. Two vectors x and y are shown in the figure. The projection vector of x on y is

15. A deposit has the grade attribute X ∈ [0, 30] with a density function 𝑓(x). For a cut-off grade xc, the proportion of the ore in the deposit is given by 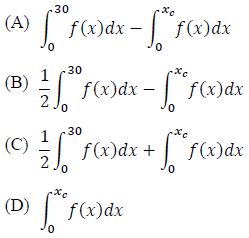 16. The drilling technique applicable for mineral exploration is

17. Match the rock with its metamorphosed form 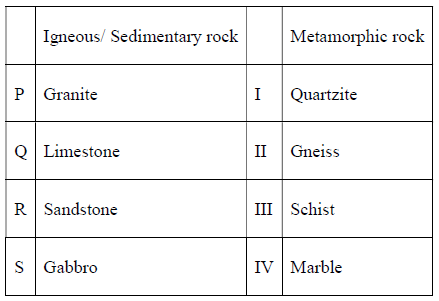 (A) takes into account the maximum pit slope that is safe

(B) helps in determining the volume of the overburden

(C) presents the maximum possible mine size that is economical

(D) takes into account the life of the mine

19. A square pattern of blasting is shown in the figure. For the case of simultaneous blast, identify the zone of no fragmentation 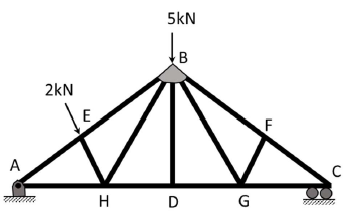 21. The correct vertical stress profile in the case of tributary area method for pillar design is 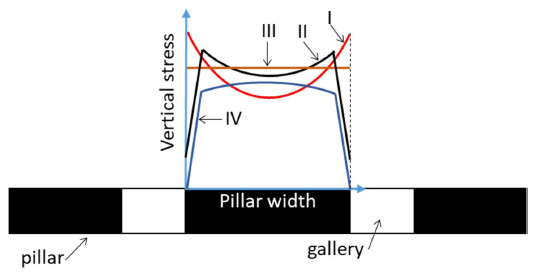 22. The bottom section of a stoping block has dimensions 200 m × 40 m. If the modified RMR of rock mass is 50, the appropriate method of mining on the basis of Laubscher’s chart in the figure is 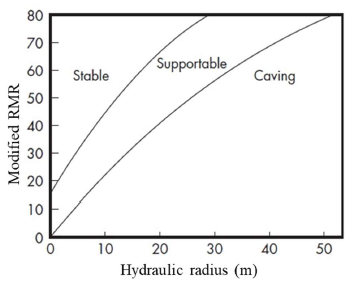 23. Match the machine with its component. 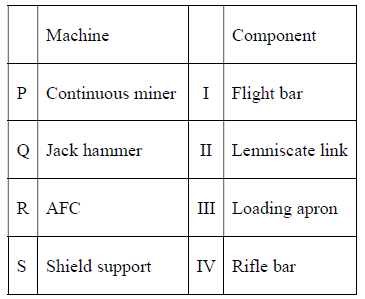 24. Which one of the following is NOT a notifiable disease as per Indian mining legislation?

25. If the ambient lapse rate is higher than the dry adiabatic lapse rate, the atmosphere is

(A) increase the air velocity at the work place

(B) lead to increased concentration of contaminants in the work place

(C) require the installation of an additional fan in the system

27. The correct order of pavement layers for a haul road from top to bottom is

28. A mining company produces iron ore and sells to another company. Royalty to be paid is on the basis of

(A) quantity of ore produced

(B) quantity of ore sold

(C) difference between the quantities of ore produced and sold

31. In a levelling survey, a reading is taken as 2.25 m. However, along the line of sight there is deflection of 20 cm with respect to vertical position of the staff. The correct reading, in m is_______. (round off to two decimal places)

32. Water flows through a vertical sand column of cross sectional area 4000 mm2 and length 300 mm. For a water head of 600 mm, quantity of seepage water is 100 mm3/min. The hydraulic conductivity of the sand column, in mm/min is_______. (round off to three decimal places)

33. The modified Lauffer diagram as shown in the figure relates to roof span, RMR and stand-up time. In a metal mine, roof span of a drive is 4 m. If the RMR of the rock mass changes from 40 to 60, then the stand-up time increases by a factor of________. (round off to two decimal places) 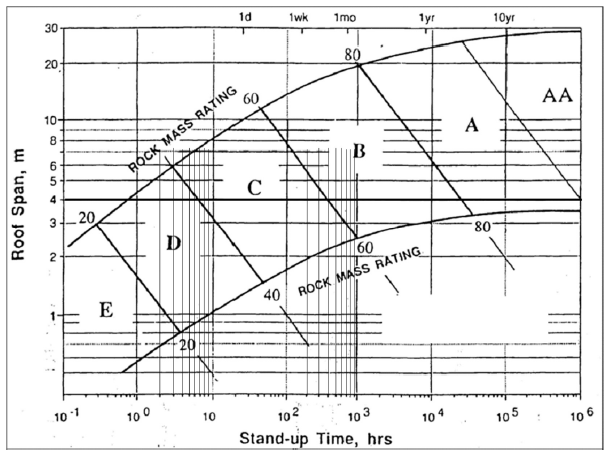 34. In a friction winder, the skip accelerates to a steady speed over a time span of 15 s from the start. The torque vs. time diagram for the winding cycle is shown in the figure. The deceleration time in seconds is_______. (round off to one decimal place) 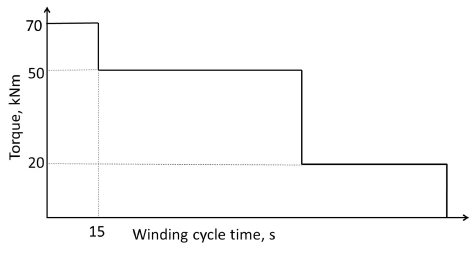 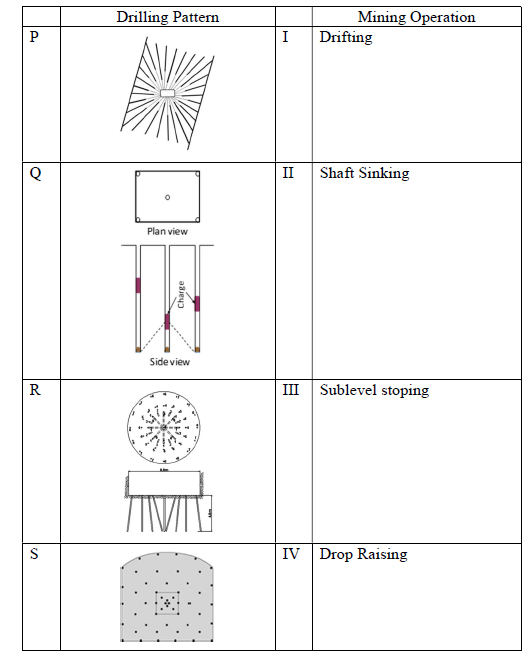 37. The closest match of the scatter plot between the variables X and Y with the approximate attribute is 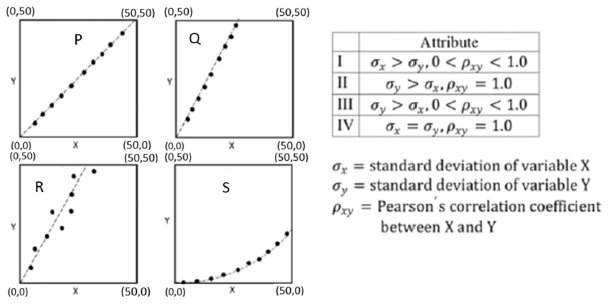 38. A 3-point borehole extensometer is installed to identify the location of a single discontinuity plane in a hanging wall rock by measuring deformations at three locations as shown in the figure. The absolute readings of deformations measured on two different dates are listed in the table. Based on the measured data the most likely inference is 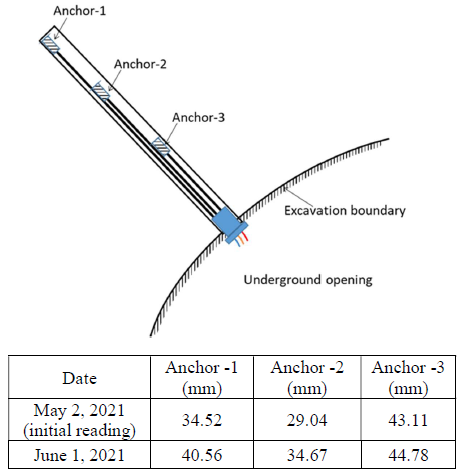 (A) Discontinuity between Anchor-1 and Anchor-2

(B) Discontinuity between Anchor-2 and Anchor-3

39. Match the semi-variogram shape with the model name and the property

40. In a uniaxial compressive strength test, a rock sample of diameter 50 mm fails at an angle of 60° as shown in the figure. If the peak load at failure is 120 kN, the normal and shear stresses on failure plane respectively, in MPa are_______ and _____. 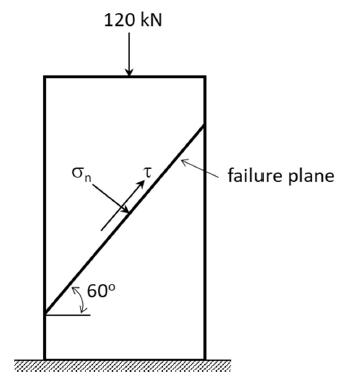 41. A coal mining company examines the option of buying two types of dumpers with the following details. 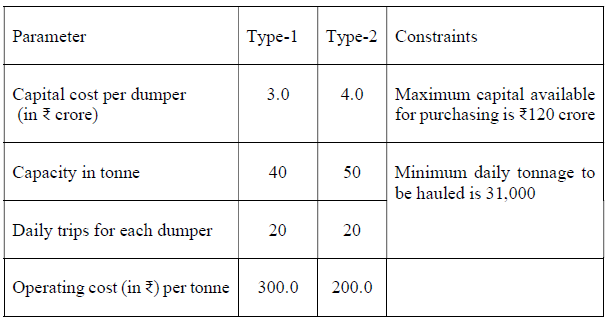 In order to minimize the operating cost, the optimum fleet of dumpers of Type-1

and Type-2, respectively are

45. Following information is given for a drilling operation to be carried out for overburden removal in a surface mine.

The amount of explosive per unit length of charge in kg/m, is _______. (round off to two decimal places)

46. The shaft-top coordinates of two vertical shafts are given below. The depth of the shaft A and B are 200 m and 149 m, respectively.

The downward gradient of the line joining the bottom of the two shafts in degrees, is _______. (round off to two decimal places)

47. The oxygen-balanced equation for explosive ANFO is given below.

48. Two weightless cables of equal length and cross sectional area are hanging from a ceiling as shown in the figure. They are connected by a horizontal light bar of length 1.0 m and pulled by a force, F. The modulus of elasticity of Cable-1 and Cable-2 are 50 GPa and 200 GPa, respectively. If the deformation in both the cables is equal, the distance x, in m is_______. (round off to one decimal place) 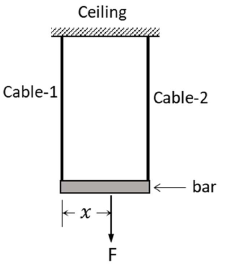 49. A circular tunnel of radius 3 m is constructed in a hydrostatic stress field of 15 MPa. The modulus of elasticity and Poisson’s ratio of the rock are 5 GPa and 0.25, respectively. A uniform support pressure pi is applied at tunnel boundary to restrict the radial deformation at the tunnel boundary to 4 mm. The value of pi in MPa is_______. (round off to two decimal places)

50. The extraction ratio during development of a bord and pillar panel is 0.15 in a flat coal seam. The panel is further extracted by widening the galleries, and the extraction ratio changes to 0.25. The percentage change in pillar stress, considering tributary area method, is_______. (round off to two decimal places)

51. In a small metal mine a battery powered locomotive hauls a train of mine tubs such that:

The coefficient of friction between the wheels and the rails : 0.06

The coefficient of adhesion between the loco wheels and the rails : 0.2

Time required from the start to reach speed of 1.8 m/s through constant acceleration, min : 3.0

Upward gradient to be negotiated : 1 in 20

The minimum weight of the locomotive in tonnes to meet these design requirements, is _______. (round off to one decimal place)

53. In a surface mine bench, overburden is removed by the shovel-dumper combination. For the dumper:

Minimum number of dumpers required to avoid idle time of the shovel, is _______. (in integer)

54. In a bord and pillar development panel, headings of 4.4 m × 2.5 m are advanced using solid blasting. The average pull per round of blast is 1.2 m. On an average 12 faces are blasted per day. Density of coal is 1500 kg/m3. The mine operates in three shifts. If the average daily employment is 330 persons, labour productivity (OMS) of the panel in tonne, is_______. (round off to two decimal places)

55. In a longwall face, the full seam thickness of 3 m is cut by a shearer with a web of depth 0.7 m. The hauling speed of shearer during cutting is 12 m/min. The trough cross-section of AFC is 0.4 m2 and the average loading coefficient is 0.7. In order to evacuate coal from the face without spillage, the speed of AFC, in m/s is_______. (round off to one decimal place) 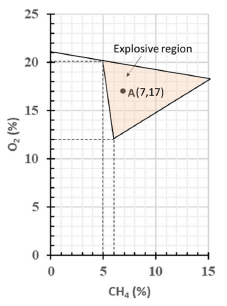 58. An underground workshop has dimensions of 8 m length, 6 m width and 4 m height. Four identical luminaires are placed at the four corners of the roof. Each luminaire is of 100 W capacity with luminous efficacy of 100 lumen/W. Light is transmitted spherically from luminaires and there are no reflections. The illumination on the horizontal plane at the centre of the floor, in lux is_______. (round off to two decimal places)

59. An underground AC plant requires the delivery of 250 US gpm (15.85 US gpm = 1.0 lps) of chilled water. For this purpose, ice-pellets at 0°C temperature (latent heat of melting, 334 kJ/kg) are mixed with water at 20°C (specific heat 4.18 kJ/kg°C) on the surface. The mixture is adiabatically transported to the underground location such that the water at 7°C becomes available for the AC plant. The requirement of ice-pellets in tonne/hr to meet the design condition, is ______. (round off to two decimal places)

61. The net present values (NPV) of two mining project proposals A and B are as given.

where, i is discount rate.

The required rate of return for which both the proposals have equal possibility of acceptance and rejection, is _______. (round off to two decimal places)

63. A coal seam of uniform thickness 12 m is dipping at an angle 30° as shown in the figure. The ultimate pit is demarcated based on allowable instantaneous stripping ratio of 10 m3/tonne and safe slope angle of 45°. The density of coal is 1.41 tonne/m3. The length, L in m is_______. (round off to two decimal places)

64. A mine has a reserve of 150 million tonne (Mt) and is designed for a maximum production capacity of 5 Mt per year. In the first year the production is 2 Mt and it increases by 20% each year. The reserve in Mt that remains at the end of 15 years, is_______. (round off to two decimal places)

65. Information on Activity-Time duration of a project is provided below 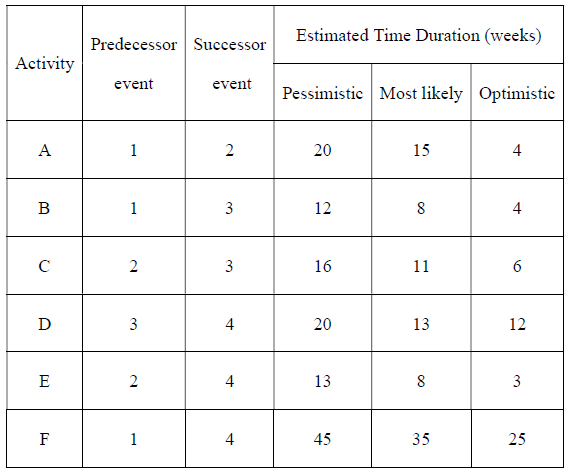