2. A girl standing on road holds her umbrella at 45° with the vertical to keep the rain away. Ifshe starts running without umbrella with a speed of 15√2 kmh–1, the rain drops hit herhead vertically. The speed of rain drops with respect to the moving girl is

4. A system of two blocks of masses m = 2 kg and M = 8 kg is placed on a smooth table as shown in the figure. The coefficient of static friction between two blocks is 0.5. The maximum horizontal force F that can be applied to the block of mass M so that the blocks move together will be 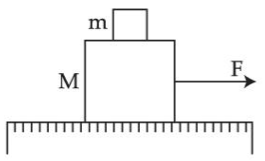 5. Two blocks of masses 10 kg and 30 kg are placed on the same straight line with coordinates(0, 0) cm and (x, 0) cm respectively. The block of 10 kg is moved on the same line through a distance of 6 cm towards the other block. The distance through which the block of 30 kg must be moved to keep the position of centre of mass of the system unchanged is

7. Given below are two statements.

Statement-I: The law of gravitation holds good for any pair of bodies in the universe.

Statement-II: The weight of any person becomes zero when the person is at the centre of the earth.

In the light of the above statements, choose the correct answer from the options given below

9. The velocity of a small ball of mass ‘m’ and density d1, when dropped in a container filled with glycerine, becomes constant after some time. If the density of glycerine is d2, then the viscous force acting on the ball, will be

10. The susceptibility of a paramagnetic material is 99. The permeability of the material in Wb/A-m, is

11. The current flowing through an ac circuit is given by I = 5 sin(120πt)A. How long will the current take to reach the peak value starting from zero?

13. An α particle and a carbon 12 atom has same kinetic energy K. The ratio of their de-Broglie wavelengths (λα : λC12) is :

14. A force of 10 N acts on a charged particle placed between two plates of a charged capacitor. If one plate of capacitor is removed, then the force acting on that particle will be

15. The displacement of simple harmonic oscillator after 3 seconds starting from its mean position is equal to half of its amplitude. The time period of harmonic motion is :

16. An observer moves towards a stationary source of sound with a velocity equal to one-fifth of the velocity of sound. The percentage change in the frequency will be:

17. Consider a light ray travelling in air is incident into a medium of refractive index √2n. The incident angle is twice that of refracting angle. Then, the angle of incidence will be:

18. A hydrogen atom in its ground state absorbs 10.2 eV of energy. The angular momentum of electron of the hydrogen atom will increase by the value of:

19. Identify the correct Logic Gate for the following output (Y) of two inputs A and B. 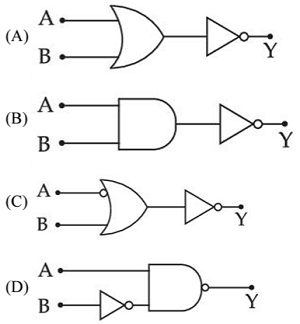 25. A cell, shunted by a 8 Ω resistance, is balanced across a potentiometer wire of length 3 m. The balancing length is 2 m when the cell is shunted by 4 Ω resistance. The value of internal resistance of the cell will be _______ Ω.

27. A capacitor of capacitance 50pF is charged by 100 V source. It is then connected to another uncharged identical capacitor. Electrostatic energy loss in the process is ________nJ.

Reason (R) : Both O2– and Mg2+ are isoelectronic species.

(B) Leaching of alumina (II) NaOH

11. Which of the following will have maximum stabilization due to crystal field?

12. Given below are two Statements:

Statement I: Classical smog occurs in cool humid climate. It is a reducing mixture of smoke, fog and sulphur dioxide.

13. Which of the following is structure of a separating funnel?

15. The major product of the following reaction is: 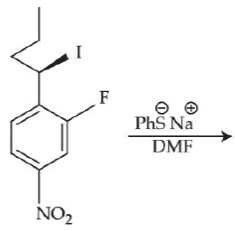 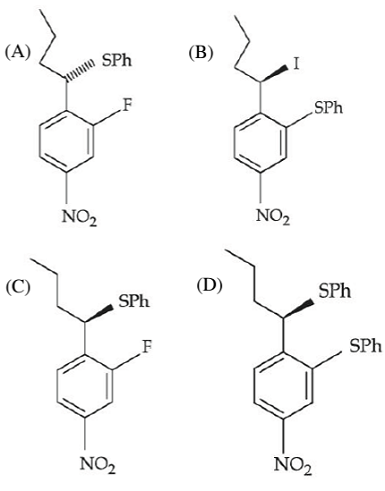 16. Which of the following reactions will yield benzaldehyde as a product?

17. Given below are two statements:

Statement-I : In Hofmann degradation reaction, the migration of only an alkyl group takes place from carbonyl carbon of the amide to the nitrogen atom.

Statement-II : The group is migrated in Hofmann degradation reaction to electron deficient atom. 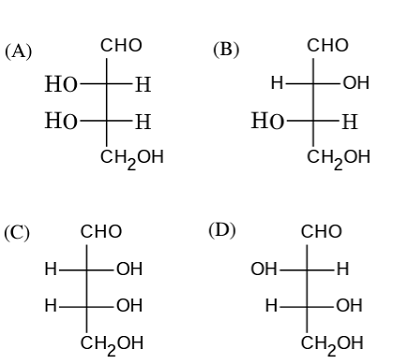 21. Metal deficiency defect is shown by Fe93O. In the crystal, some Fe2+cations are missing and loss of positive charge is compensated by the presence of Fe3+ ions. The percentage of Fe2+ ions in the Fe0.93O crystals is ______. (Nearest integer)

23. 2 g of a non-volatile non-electrolyte solute is dissolved in 200 g of two different solvents A and B whose ebullioscopic constants are in the ratio of 1 : 8. The elevation in boiling points of A and B are in the ratio

26. The rate constant for a first order reaction is given by the following equation :

The activation energy for the reaction is given by ______ kJ mol–1. (In nearest integer)

(A) Cu(II) complexes are always paramagnetic

(B) Cu(I) complexes are generally colourless

(D) In Fehling solution, the active reagent has Cu(I)

30. Total number of possible stereoisomers of dimethyl cyclopentane is _______.

1. The area of the polygon, whose vertices are the non-real roots of the equation

where a, b, c are constants, represent a circle passing through the point (2, 5). Then the shortest distance of the point (11, 6) from this circle is

5. Let a be an integer such that

where C is a constant, then

10. The value of the integral

13. Let the eccentricity of an ellipse

Then the number of vectors

22. If the sum of all the roots of the equation

23. The positive value of the determinant of the matrix A, whose

25. If the coefficient of x10 in the binomial expansion of

27. If the sum of the first ten terms of the series

29. A circle of radius 2 unit passes through the vertex and the focus of the parabola y2 = 2x and touches the parabola