Assertion A : Product of Pressure (P) and time (t) has the same dimension as that of coefficient of viscosity.

(A) Both A and R true, and R is correct explanation of A.

2. A particle of mass m is moving in a circular path of constant radius r such that its centripetal acceleration (a) is varying with time t as a = k2rt2, where k is a constant. The power delivered to the particle by the force acting on it is given as

3. Motion of a particle in x-y plane is described by a set of following equations 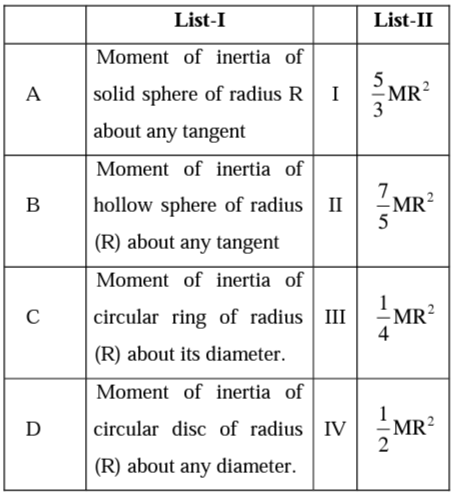 5. Two planets A and B of equal mass are having their period of revolutions TA and TB such that TA= 2TB. These planets are revolving in the circular orbits of radii rA and rB Which out of the following would be the correct relationship of their orbits?

6. A water drop of diameter 2 cm is broken into 64 equal droplets. The surface tension of water is 0.075 N/m. In this process the gain in surface energy will be

7. Given below are two statements

Statement-II: In the above case, when work is done on the gas, the temperature of the gas would rise.

8. Given below are two statements

Statement-II: An electric dipole is placed in a non-uniform electric field. The net electric force on the dipole will not be zero.

9. The three charges q/2, q and q/2 are placed at the corners A, B and C of a square of side ‘a’ as shown in figure. The magnitude of electric field (E) at the corner D of the square is 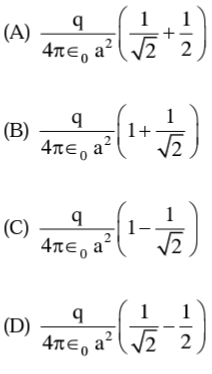 10. An infinitely long hollow conducting cylinder with radius R carries a uniform current along its surface.

Choose the correct representation of magnetic field (B) as a function of radial distance (r) from the axis of cylinder.

11. A radar sends an electromagnetic signal of electric field (E0) = 2.25 V/m and magnetic field (B0) = 1.5 × 10–8 T which strikes a target on line of sight at a distance of 3 km in a medium. After that, a part of signal (echo) reflects back towards the radar with same velocity and by same path. If the signal was transmitted at time t = 0 from radar, then after how much time echo will reach to the radar?

12. The refracting angle of a prism is A and refractive index of the material of the prism is cot (A/2). Then the angle of minimum deviation will be :

13. The aperture of the objective is 24.4 cm. The resolving power of this telescope, if a light of wavelength 2440 Å is used to see the object will be:

15. The Q-value of a nuclear reaction and kinetic energy of the projectile particle, Kp are related as :

16. In the following circuit, the correct relation between output (Y) and inputs A and B will be: 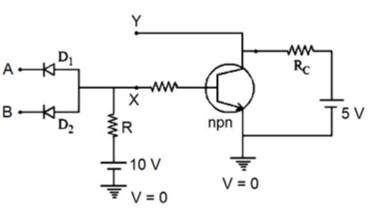 17. For using a multimeter to identify diode from electrical components, choose the correct statement out of the following about the diode:

(A) It is two terminal device which conducts current in both directions.

(C) It does not conduct current gives an initial deflection which decays to zero.

(D) It is three terminal device which conducts current in one direction only between central terminal and either of the remaining two terminals.

Reason R: Electrons have greater mobility as a charge carrier.

(A) Both A and Rare true, and R is correct explanation of A. 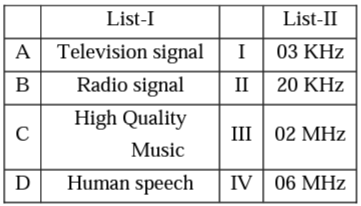 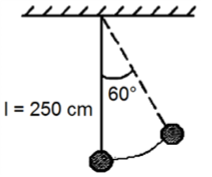 22. A meter bridge setup is shown in the figure. It is used to determine an unknown resistance R using a given resistor of 15 Ω. The galvanometer (G) shows null deflection when tapping key is at 43 cm mark from end A. If the end correction for end A is 2 cm, then the determined value of R will be ___ Ω. 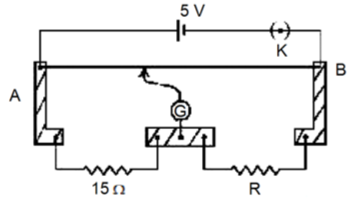 23. Current measured by the ammeter

in the reported circuit when no current flows through 10 Ω resistance, will be ___ A. 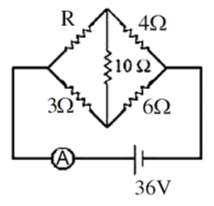 25. The position vector of 1 kg object is

27. A hanging mass M is connected to a four times bigger mass by using a string-pulley arrangement. as shown in the figure. The bigger mass is placed on a horizontal ice-slab and being pulled by 2 Mg force. In this situation.tension in the string is x/5 Mg for x = _________. Neglect mass of the string and friction of the block (bigger mass) with ice slab. (Given g = acceleration due to gravity)

29. A sing1y ionized magnesium atom (A24) ion is accelerated to kinetic energy 5 keV and is projected perpendicularly into a magnetic field B of the magnitude 0.5 T. The radius of path formed will be _________ cm.

30. A telegraph line of length loo km has a capacity of 0.01 µF/km and it carries an alternating current at 0.5 kilo cycle per second. If minimum impedance is required, then the value of the inductance that needs to be introduced in series is ________ mH. (if π = √10)

1. The incorrect statement about the imperfections in solids is :

(A) Schottky defect decreases the density of the substance.

(B) Interstitial defect increases the density of the substance.

(C) Frenkel defect does not alter the density of the substance.

(D) Vacancy defect increases the density of the substance.

2. The Zeta potential is related to which property of colloids?

(C) Charge on the surface of colloidal particles

3. Element “E” belongs to the period 4 and group 16 of the periodic table. The valence shell electron configuration of the element, which is just above “E” in the group is

Reason R : The melting and boiling points of magnesium are lower than those of aluminium.

In light of the above statements, choose the most appropriate answer from the options given below :

(A) Both A and R are correct, and R is correct explanation of A.

(B) Both A and R are correct, but R is NOT the correct explanation of A.

(C) A is correct R is not correct.

5. Dihydrogen reacts with CuO to give

6. Nitrogen gas is obtained by thermal decomposition of

7. Given below are two statements :

Statement I: The pentavalent oxide of group-15 element, E2O5, is less acidic than trivalent oxide, E2O3, of the same element.

Statement II: The acidic character of trivalent oxide of group 15 elements, E2O3, decreases down the group.

In light of the above statements, choose most appropriate answer from the options given below:

8. Which one of the lanthanoids given below is the most stable in divalent form?

9. Given below are two statements:

Statement II: [NiCl4]2– and [Ni(CO)4] both have same d-electron configuration, have same geometry and are paramagnetic.

In light of the above statements, choose the correct answer from the options given below :

10. Which amongst the following is not a pesticide?

11. Which one of the following techniques is not used to spot components of a mixture separated on thin layer chromatographic plate?

(C) Visualisation agent as a component of mobile phase

(D) Spraying of an appropriate reagent

12. Which of the following structures are aromatic in nature?

13. The major product (P) in the reaction

14. The correct structure of product ‘A’ formed in the following reaction.

15. Which one of the following compounds is inactive towards SN1 reaction?

16. Identify the major product formed in the following sequence of reactions:

17. A primary aliphatic amine on reaction with nitrous acid in cold (273 K) and there after raising temperature of reaction mixture to room temperature (298 K), gives

18. Which one of the following is NOT a copolymer?

19. Stability of α-Helix structure of proteins depends upon

20. The formula of the purple colour formed in Laissaigne’s test for sulphur using sodium nitroprusside is

24. 4.0 L of an ideal gas is allowed to expand isothermally into vacuum until the total volume is 20 L. The amount of heat absorbed in this expansion is _______ L atm.

(Relative atomic masses of Ag and Br are 108u and 80u, respectively).

(A) One-one but not onto

(B) Onto but not one-one

(C) Neither one-one nor onto

(D) One-one and onto

3. If the system of linear equations

where λ∈ R, has no solution, then

7. Let [t] denote the greatest integer less than or equal to t. Then, the value of the integral

Where a, b, c ∈ ℝ and [t] denotes greatest integer less than or equal to t. Then, which of the following statements is true?

(D) f is discontinuous at atleast two points, for any values of a, b and c

10. Let the solution curve y = y(x) of the differential equation

11. Let y = y(x) be the solution of the differential equation

13. Let the eccentricity of the hyperbola

contain the line of intersection of two planes

18. The probability, that in a randomly selected 3-digit number at least two digits are odd, is

19. Let AB and PQ be two vertical poles, 160 m apart from each other. Let C be the middle point of B and Q, which are feet of these two poles. Let π/8 and θ be the angles of elevation from C to P and A, respectively. If the height of pole PQ is twice the height of pole AB, then tan2θ is equal to

Then, which of the following is NOT true?

23. The mean and standard deviation of 15 observations are found to be 8 and 3, respectively. On rechecking, it was found that, in the observations, 20 was misread as 5. Then, the correct variance is equal to _______.

are coplanar vectors and

28. The number of positive integers k such that the constant term in the binomial expansion of