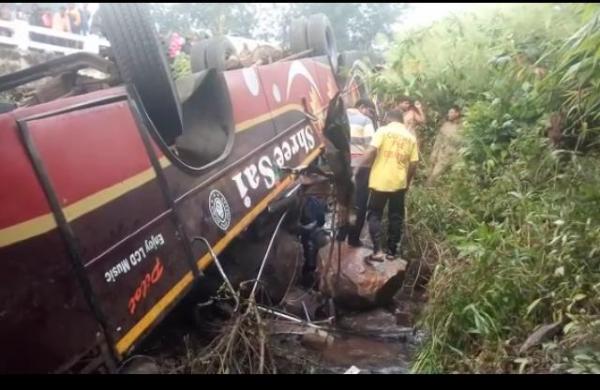 BERHAMPUR: At least eight persons were killed and over 35 injured after a bus fell off a bridge at Taptapani Ghat in Ganjam district in the wee hours of Wednesday.

Sources said the mishap took place a little after 3 AM when the ill-fated bus that was on its way to Berhampur from Kashipur fell from a height of 25 feet. Since more than 50 passengers were travelling in the bus, more are suspected to have been trapped in it as rescue operations continue.

The injured passengers were rushed to Digapahandi Hospital and later 12 of them were shifted to MKCG Medical College and Hospital at Berhampur after their condition deteriorated.

The rescue operation was initially affected due to dense fog. Though the cause of the mishap has not been ascertained yet, it is suspected that the driver might have failed to negotiate the curve due to fog.

An injuried passenger said the bus driver and other staff had tea at Luhagadi dhaba and then travelled towards the destination. “After half an hour journey from the dhaba, I heard a huge sound and before I could realise, the bus had already fallen off the bridge,” he said.

Southern Range DIG Satyabrata Bhoi said Berhampur SP is monitoring the rescue operations at the spot and it is expected to be over soon. Investigation is on to ascertain the exact reason behind the mishap, he added.

Meanwhile, Commerce and Transport Minister Padmanabha Behera said as per preliminary investigation it is suspected that the bus might have overturned after the driver lost balance due to low visibility in foggy condition.

“The Regional Transport Officer has been directed to conduct an inquiry and submit a report. Ganjam Collector has been asked to monitor the treatment of injured passengers,” he added.