BHUBANESWAR:  In a bid to reinforce Chief Minister Naveen Patnaik’s people-centric governance at the grassroots level, Odisha Government has planned to popularise Mo Sarkar initiative and its benefits across the State.

Launched on October 2 last year, the initiative that attempts to bring in professionalism and behavioural change in public offices through a direct random feedback system from citizens has become a model for other States. 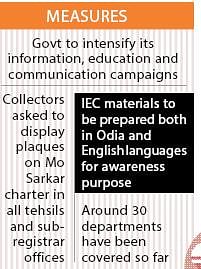 Initially introduced in police stations and hospitals across the State, the programme now has been extended to around 30 departments with officials pulling up their socks to deliver services as mandated by the Government.

As it has been decided to cover all 317 tehsils and 191 sub-registrar offices in the State this week and all offices by March 5 under Mo Sarkar, the Government has embarked on to intensify its information, education and communication (IEC) campaigns.

Additional Chief Secretary of Revenue and Disaster Management P K Mohapatra has directed all Collectors to ensure that plaques on the Chief Minister’s Mo Sarkar charter are displayed in all tehsils and sub-registrar offices.

The Collectors have been asked to prepare the IEC materials both in Odia and English languages and distribute it among officials to create awareness on the basic tenets of the transformative initiative.

The toll free helpline 14545 to get the number of complainants registered for collection of feedback will be displayed prominently in all block and tehsil offices.

As part of the initiative, when a citizen goes to any government office, his/her phone number will be registered and they will get an SMS in 24 hours.

Of the numbers registered in the Mo Sarkar portal, randomly selected numbers will be picked up and calls will be made to take feedback.Since all public institutions exist for serving the people and it is an empowerment initiative, an official said identification of the citizens who give negative feedback will not be revealed and the feedback will be taken seriously.

“Later, random feedback will be collected from some more persons, who have visited, to confirm the poor work by the office or official. Based on this, disciplinary and other actions will be initiated against those responsible. The institution will also get a poor ranking. It will help improve accountability,” he added.