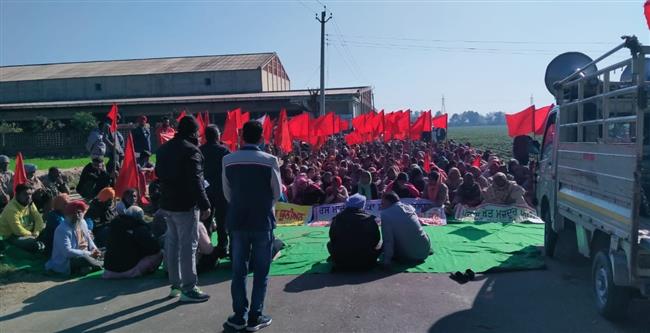 SHAHKOT Activists of seven left oriented mass organisations on Friday staged a dharna in front of residence of Shahkot MLA Hardev Singh Laddi in protest against the state’s decision to handover shamlat (common) land in villages to industrialists for industrial development.

Addressing a protest rally leaders condemned the government’s move and said that   it   mulls the rights of Dalits and underprivileged people in villages.

The cabinet had cleared the proposal of the rural development and panchayats department regarding insertion of Rule 12-B in the Punjab Village Common Lands (Regulation) Rules, to provide special provision for transferring common land for development of industrial infrastructure, to be implemented by the industries department and the Punjab Small Industries and Export Corporation (PSIEC).

Leaders said that as per the common land Act, the shamlat land cannot be sold and transferred to anyone at any cost.

They said that the land does not come under habitation and is considered consolidated land for common use, especially for Dalits residing in villages.

Leaders said that instead of providing employment resources, the state is hell-bent on displacing villagers with such draconian amendments.

They appealed to panchayats to not to pass any resolution regarding transferring of shamlat land under their respective jurisdictions.

A memorandum of demands was submitted.