North Delhi is an administrative district of the National Capital Territory of Delhi in India. 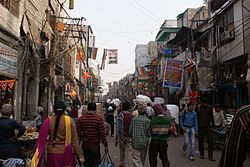 Sadar Bazaar is the largest wholesale market of household items in Delhi, India. Like other major markets of Old Delhi, this market is very crowded and buzzes with activity. Although it is primarily a wholesale market, it also caters to occasional retail buyers. Owing to the sheer volumes that are traded here every day, a visit to the market can be termed sensory overload. In addition to being a market for traders, Sadar Bazaar is a parliamentary constituency, making it a hub for politics