Thiruananthapuram, the jewel in the emerald necklace that Kerala is for the Indian sub-continent, must surely have

been a “must see” destination for ages, long before National Geographic Traveller classified it as one. Surely long before Sage Parasurama , according to local legend, threw his divine battle axe from Kanyakumari to Gokarnam to wrest Kerala, God’s own land, from the Varuna the sea god; before the times of Mahabali  the democratic and just

ruler of this wonderful land who was sent down to the netherworld through deceit. It doesnt take any flights of fancy to imagine that this land fired the imaginations of intrepid travellers and explorers like Columbus, Vasco da Gama, Marco Polo, Fa Hien, and quite possibly, countless others from the pages of history, recorded or not.

Thiruvananthapuram, or Trivandrum, as it was conveniently re-christened by the English, is the southern-most district and Thiruvananthapuram city is the  district headquarters as well as the State capital of Kerala. Thiru Anantha Puram, or the city of the Holy Anantha,  is named after Ananthan, the cosmic serpent with a thousand heads, on whose coils Lord Mahavishnu reclines. This iconic representation is the

chief deity in the Sri Padmanabhaswamy Temple. The temple was built by King Marthanda Varma  of the Travancore Royal family when, in 1745, he shifted the Travancore capital from Padmanabhapuram  in the south (today in the neighbouring State of Tamil Nadu) to Thiruvananthapuram

and started reigning as ‘Padmanabha Dasa’, the servant and representative of Lord Padmanabha–perhaps a nobler variant of the ‘Divine Right Theory’ that the West is familiar with . The vast temple complex, with its tall ‘Gopuram’ decorated with detailed carvings reflected in the huge temple tank, is today a centre of attraction for the pious, the tourist and the merely curious.

into a sprawling metropolis; but thankfully the city still retains her past glory and charm, and in spite of the frenetic pace of modern life, perhaps it is the most sedate of the big cities of the State. The people too have retained their friendliness and hospitality, and communicating in English, Hindi or Tamil is as easy as it is in the native Malayalam, whether one is talking to a retired professor or to the man in the street. But be prepared for a ‘dose’ of highly individualistic observations though– a hallmark of the Malayali that has enabled him to adapt and to survive the Tsunamis of alien cultures and ideas, and all things ‘modern’. The old quarter

of the city clusters in and around the East Fort, a protected landmark that dates back to the Royal days. The rightly famous Sri Padmanabhaswamy temple , the Navarathri Mandapam, where the annual musical fest is held as an offering to Saraswati, the Goddess of Learning , Kuthira Malika, a uniquely wonderful example of traditional architecture and the venue of the annual Swathi Thirunal music festival honouring the composer-king of Travancore are the best among the traditional structures that adorn the Fort enclave. The Mahatma Gandhi Road, the chief artery of the city, is lined by traditional mansions that proclaim the grandeur of the times past and modern high-rises that testify to the city’s newfound affluence and a brashly commercial taste –red tile and timber vying with concrete and glass. What perhaps is special about the ambience of Thiruvananthapuram is the wonderful blend of the strongly traditional, the nostalgically Colonial and the outright modern elements, be it in architecture, in food or in the dress and manners of her people. The city’s spirit of ‘live and let live’ is nowhere more evident than at Palayam (the Garrison, the seat of the old Cantonment), where three

Blessed with a pleasant climate virtually throughout the year, Thiruvananthapuram city sparkles after the monsoon rains.

After the ‘hot’ summers, which thankfully pale in comparison to the ‘hotspots’ of India, the welcome summer showers augur the festival season when Kerala decks herself out, and traditional colours and rhythms and characters straight from the pages of her ancient lore entice the visitor to another world. The festivities are crowned by Onam , the Spring harvest festival, today marked by traditional fare throughout the State,

including the spirited race of the picturesque and majestic snake boats , the grand elephant parade, when hordes of caparisoned pachyderms lend an air of fantasy to the setting, and the special presentations of Kathakali , Mohiniyattom , Koodiyattom  and other traditional arts of Kerala.  etc etc 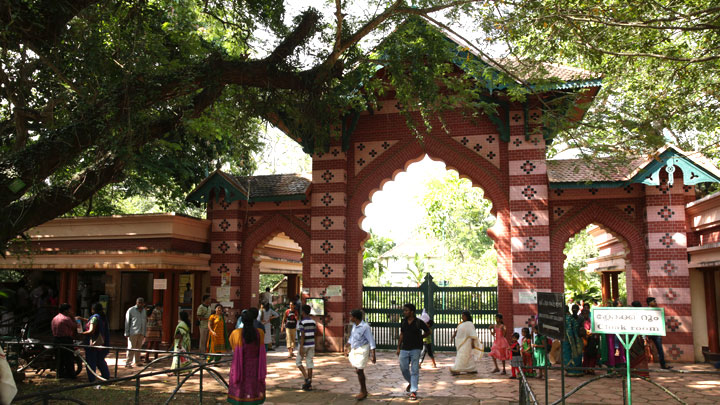 One of the first zoos in India, the Zoological Park in Thiruvananthapuram district of Kerala, was established as early as 1859. A reptile house with different species of snakes and a vulture house are also located within the premises. Plastic is banned inside the park. The park is open daily from 0900 to 1815 hrs. It is closed on Mondays

Veli tourist village is a popular picnic destination in Thiruvananthapuram district. It is sited where Veli Lake meets the Arabian Sea. The tourist spot comprises of a large garden on the southern banks of Veli lagoon. The landscape is dotted by stone and grass sculptures by Kanayi Kunhiraman. A floating bridge connects this garden to the Veli beach.

There are also a wide range of attractions such as play areas for children. Visitors can book various boat rides in Veli Lake. There are speedboats, paddle boats and other boats for a leisurely ride. Opt for horse rides or enjoy games at the shopping stalls. Birds such as pigeons and swans, fish and tortoises inhabit the area. It is idyllic for an outing with family.

Ideal for picnics, relax in the blessed environs. The Floating Cafe by Kerala Tourism Development Corporation (KTDC) gives you an amazing array of food products which might match your taste buds.

When you are in Kovalam, do not miss to spend some time in the Veli Tourist Village

ust 8 kilometres away from the central city, Shanghumugham beach is one of the most popular touristy areas in Trivandrum. Most of the people come here to enjoy the beautiful sunset.

As you reach here, you would see a huge (approximately 35 metres long) structure of a mermaid, known by the name of Matsya Kanyaka. Constructed in a reclining posture, this sculpture is a brilliant piece of art created by one of the distinguished sculptors of Kerala.

Apart from the mermaid sculpture, you would also find a restaurant in the shape of a Starfish, recreation club for children and adults alike (indoor) and a children’s traffic training park.